The Vikings, the Goths, and the whole damn family

I have about half a dozen blog entries started that I can’t get off the ground.  They’re all the same, basically.  They range from rage to sorrow, but they all touch on the American decision to turn our backs on the fight against racism, sexism and homophobia, government by oligarchy and destruction of the environment. Complete with illustrations ad nauseam of foxes being assigned to run the new Hen House.  Depressing as shit on wheels.

So I went out to our storage shed this morning and began a reorganization of the clutter.  Just the thing, I thought, to get me away from the computer and the relentless beating of my head against a brick wall of bad news.  Time to move the arms and legs, that little voice said.  Time to fix what you have the power to fix and leave the rest to others for a while.

Perspective.  That’s what’s always missing when you find yourself getting depressed, the voice said.  You need to stretch your attention across something wider, something deeper.  Get some historical perspective, for example.

So I let my mind wander.  Free associate.  I found a box of Christmas stuff and suddenly the melody to “O wie wohl ist mir am Abend” came to me.   Don’t know why.  It’s not a Christmas song.  It’s a round I sang with my grandmother as a kid.  You may know it as “Oh, how lovely is the evening.”  I found it on YouTube with three young people I take to be Americans singing it for no apparent reason, not particularly well and mispronouncing the German. They are in Thailand, evidently, just to round out the bits of information of no consequence.  Just three people singing.  Just what the doctor ordered.

In this case the doctor would seem to be my grandmother.  She had a thing for singing.  She had gone through the hell of the First World War, losing a husband and having to farm a daughter out to her sister to raise so she (the daughter, my mother) would have enough to eat.  Then she gave up her homeland and lived forever caught between Germany, the land of her birth and America, her chosen home.  When in one of those places, she was usually homesick for the other.  Spent a ton of money visiting the Heimat, back in the day when you had to go by ship.  She was a stewardess on the Hamburg-Amerika Line back before the Second World War and jumped ship in New York to be with my mother again.  When the war came, there she was, an illegal German alien in America.  She was arrested for being a spy and taken to Washington for trial, where they soon realized what they had on their hands was a German Hausfrau who loved to cook and sing and knew precious little about politics.

“Wherever you are in the world,” she told me more than once, “if you’re ever lost and confused, find your way to where people are singing and you will be all right.”

My grandmother anchors me to Germany and the European continent.  In 1960 I went to Germany to study, and found myself digging into the history of the Third Reich as taught by German professors at the University of Munich, and attending lectures by concentration camp survivors.  My cognitive dissonance (how do good people do such bad things?) started early on.

It’s helping, I think, to consider what people have been through and survived.  I know lots of people are saying this is the end of the world, or at least a setback so severe that we will not see the end of it in our lifetimes.  But it’s useful to take note of the marvelous place that Germany is today, and appreciate how it is possible to recover from disaster.

1945 was hardly the first time they had to pick up the pieces after a disaster.  Religious Wars.  The Bubonic Plague.  The Inquisition.  Times when people probably didn't feel much like singing.

If you are a speaker of English or another Germanic language, it's useful, I think, in searching for perspective, to take a look at what is essentially family history.  Today we sit around the table at Thanksgiving with Trump supporters, some of us.  At some point in the past, though, family included Vikings, Goths (Ostro- and Visi-), Huns, Nazis, Crusaders and a whole bunch of other seriously brutal folk.  (And maybe not all that bad, actually, but that is a subject for another day.) We survived them.  We will survive these guys who are, let’s admit it, pretty mild by comparison.  Throwing the weak among us under the bus isn’t quite as bad as raping and pillaging entire villages, after all. (Unless it's you going under the bus, of course.)

And we know that all the while this pillaging was going on, somewhere people were singing.  We know this because the words the Vikings and the Huns and the rest of the Germanic people used are still here, with their shared grammar (using ablauts to make the past tense and the past participle) and with only minor differences among them:

Things could be a lot worse.  I know, because I have not felt the need to pull out Elisabeth Schwarzkopf singing the four last songs of Richard Strauss just yet.  That's my go-to when all else fails.  That and macadamia nuts and white chocolate.  And Bratwurst and German-fried potatoes.

Here's the last of the four songs, which is a poem by Josef von Eichendorff.

It's in virtually every soprano's repertoire, I imagine.  I'm partial to Schwarzkopf's version, but can't find one to link to that is live, and I hate staring at a record label while listening to music. So here's Kiri Te Kanawa's version, which is available online with her performing it live.  A pretty good second, in my estimation.  And I'm so glad she's wearing the kitchen curtains, like Carol Burnett did ("I saw them in the window and couldn't resist") in my favorite skit of hers, the takeoff on Gone with the Wind.

I can't take this music straight.  Too powerful for me.  So glad she provided this distraction to keep me from spilling over.

It's the music I'd like to go to, eventually.

Fear not.  I'm nowhere near ready to cash in my chips just yet.  Just want to get things lined up for when the time comes.

Ramos, a winner of eight Emmy awards, spent nine months traveling the country and interviewing these folks for the documentary.  He describes his motivation for making the film the time Trump refused to call on him and told him, “Go back to Univision.”  I remember that event and at the time I thought Ramos was a little pushy.  But then he wasn’t being called on, and no doubt I’d get pushy, as I expect any good journalist would, under those circumstances.  Ramos was booted out of the press conference and one of Trump’s men actually said to him, “Get out of my country.”  Since Ramos is a U.S. citizen, “Go back to Univision” sounded to him like just another way of saying “Go back to Mexico.” He had come face-to-face with the fear surrounding the predictions about whites becoming a minority in their own country, a fear often expressed as hatred, and he saw it as a story worth investigating further.  Hence Hate Rising, which appeared this last week on Fusion and Univision. 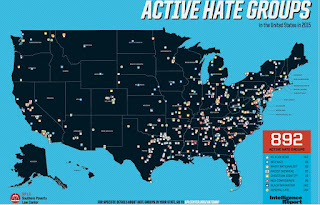 Hate groups are nothing new.  Gay people live their lives in constant struggle against organizations of the religious right like the Family Research Council and the Traditional Values Coalition, organizations with reasonable sounding names which mask a seriously aggressive bigotry.  Twitter reports 2.6 million anti-semitic messages on twitter on the last year.   And the Southern Poverty Law Center, a major clearing house keeping track of hate groups, has produced a map of 892 hater groups – KKK, neo-nazi, white nationalists and skinheads leading the pack ­– across the United States.
I remember reading somewhere - I think it was Alan Dershowitz – about anti-Semitism in the United States.  Whoever it was was making the point that we need to not push the panic button, not assume that anti-semites are under every rock and behind every door.  Focusing on the positive, we need to remember, he said, that there has been considerable progress in Western Civilization.  In the Nazi era, anti-Semitism was official government policy.  And Jews were barred from country clubs in the U.S., as well.  Today, in virtually every modern democratic state, anti-Semitism still exists, but it belongs to the crazy fringe groups.
That’s a point worth repeating.  You can be a racist, a homophobe, a sexist or an anti-Semite, but when you reveal yourself as one, you also reveal yourself as a crackpot.  Sane people, decent people, don’t take these stands.
But maybe that’s too optimistic.  Maybe they are all there hiding somewhere, looking for an opportunity to come out of the woodwork.
Watch this documentary.  It’s available on YouTube.  Then take a look at some of the folks speaking out at Trump rallies, and watch Trump's response – or, more accurately, non-response.
There’s the danger, I think.  We all know Trump’s a risk because he knows so little about foreign policy, is clueless about how government works to make and change laws, treats women as playthings, makes statements that are false 80% of the time, has an outspoken homophobe as a running mate and Breitbart bigots running his campaign.  And if you want a longer list, check out Rolling Stone’s “Why Not to Vote for Trump, From A to Z”

But for me there is another important reason, one that has been seriously underrated – the fact that ugliness encourages more ugliness. You can’t be blamed, of course, for everything your friends say about you or claim to say in your name.  But we’ve gone from a time when people who believed “Hitler didn’t go far enough” or “blacks need to know their place” or “Mexicans are rapists” stayed pretty much out of sight, and we all thought the KKK was nowhere to be seen any longer.
Turns out we may have been wrong about that.  All it took was a Donald Trump to bring them out.
Don't believe me?  Consider this.  Previously most fringe groups refused to engage in American politics, arguing they were anti-government and therefore had no horse in its political races. Compare that with the statements being made these days by KKK and neo-nazis and the like that they are supporting Trump for president.
Have a look at Hate Rising and tell me I’m wrong.
White Lives Matter
Crusader, official paper of the KKK