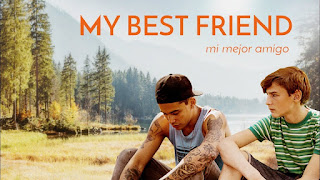 I’ve been complaining for ages now about the low quality of gay-themed movies pouring out of Netflix and Amazon Prime. Although LGBT viewers now have more characters they can relate to on the screen, most of the plot lines are pulled out of a pretty shallow pool. They center for the most part on escaping toxic religion, bad parenting, and childhood bullying, and lead all too often to smarmy happy endings. Which is fine. The hustler finds love, the shy kid experiences the joy of sex for the first time, everybody finds their Mr./Ms. Right and homophobia slips ever further into history.  What’s wrong with that?

What’s wrong is there are so many original stories waiting to be told that go beyond the trite. Come on, film world, I hear myself saying.  I’ve seen Brokeback Mountain. I’ve seen Moonlight and Call Me By Your Name.  I know you can do it.

Somebody was listening. A 2018 Argentine film popped up today on Amazon Prime that blew me away. Maybe not up there dramatically with my three favorites (and then again, maybe it is, if you can appreciate the value of understatement), but full points for original story line and memorable characters.

My Best Friend, (Mi mejor amigo), is the story of two teenage boys, Lorenzo and Caíto who have to deal with each other’s vast differences. Caíto gets kicked out of his home in Buenos Aires after bashing his step-brother over the head with an iron pipe. Caíto's father persuades Lorenzo’s father, his best friend from childhood who lives in Los Antiguos, a couple thousand kilometers to the south in Patagonia, to take his troubled kid in.

Caíto is a mystery to Lorenzo. He is macho, impulsive and self-destructive, a big city
tough guy. Lorenzo’s need to figure life out is more transparent and he is almost Caíto’s polar opposite.  Caíto plays
his cards closer to his chest, at first. In time, though, he begins to open up to Lorenzo. Their differences take on an erotic hue for Lorenzo when Caíto’s acting out becomes a problem for Lorenzo’s household and Lorenzo takes it upon himself to act as Caíto’s protector. You wait for the moment you’re sure will come when they will fall into each other’s arms and give the story’s title its proper LGBT twist. I’ll stop here because the film is too good to take down with spoilers.

The acting is first rate all around. Lorenzo is played by Angelo Mutti Spinetta, the grandson of Luis Alberto Spinetta, the originator of Argentina’s famous rock band, Almendra, credited with being the father of Latin rock music. His mother and father are both actors and he clearly has some big shoes to fill. His younger brother plays his younger brother in the film. Mariana Anghileri, who plays Lorenzo’s mother and Guillermo Pfening, who plays his father, are perfect for their roles. Caíto is played by Lautaro Rodríguez.   He was a model before he began acting in 2017.

Coming out as a Cuomosexual

I was a big fan of Mario Cuomo’s back in the Reagan days. So much wanted him to run for president against the man I saw - still do - as the pivot point where America gave up its ideals of equality and equity. Thought he was the (fill in the blank with whichever geezer expression comes to mind - the cat’s meow, the bee’s knees…).  I was vaguely aware of the presence of his two sons, Andy and Chris. I knew that Andy had become governor of New York and Chris had become a TV newscaster. Another one of those accomplished families, I thought. How nice.

I began following Chris Cuomo in recent months as I struggled to counter the madness of the Fox/Breitbart propaganda machine with the likes of Robert Reich, Lawrence O’Donnell, Chris Hayes, Rachel Maddow, and a few others of their ilk. I tired quickly of the sharpness of the extreme left, despite the fact that they expressed my political view to a T most of the time. Morning Joe and Daily Kos do the heavy slugging against the bullies, but their relentnessness, necessary as it might be, gets tiresome after a while.  More and more I began turning to  Chris Cuomo, who, I thought, managed to keep a steady progressive take on the political scene without becoming stale. Maybe it’s more that he’s so easy on the eyes. Won’t hide from that possibility.

When it came out that he had caught the coronavirus I sat up and took notice. I’ve lost two friends in recent days, one from Alzheimer’s in Seattle and a high school classmate from the Covid-19 in New York. Another old friend is in the hospital with Covid-19 in London. On oxygen. Word came down from my friend Bill that an old friend of his had just died of Covid-19 at Mt. Sinai Hospital in New York. This is getting too close to home.

When he began to include his brother Andrew, New York’s governor, in his reports and the two of them began to display their sibling rivalry and heavy-handed teasing, my admiration shot up for the both of them. There they were, Mario’s boys, all growed up and absolutely heroic. Laughing and being affectionate brothers. Not cowering or exploding in outrage.


What started out as a casual respect for the newscaster, Chris Cuomo, turned into a focus
on Chris Cuomo the man, and his up-close tale of somebody at the frontlines of the battle against the virus. It brought the illness home and gave me a way of channeling the abrupt loss of friends, the alarming statistics and the misery of the mismanagement of the disease at the federal level into a single man’s life, somebody to root for as a symbolic way of facing the pandemic with confidence. I followed his daily reports, how he chipped a tooth flailing about one night, how he lost ten pounds in a couple days, how he worried he might pass on the virus to his wife and kids.

Strange how a crisis can bring about the worst in people, the hoarders, the scoffers, the political opportunists, the Southern Evangelicals who insist on going to church, secure in their faith that the blood of Jesus will protect them from germs. And the best in people, the heroic doctors and nurses working, and sometimes dying, in intensive care, often without the necessary resources like masks and gowns. And the spirit lifters, like the Cuomo Brothers.

I began digging around to learn more about them. Listen, if you’ve got the time, to the Cuomo boys sing the praises of their father. I challenge you to find a more inspiring story of the love of family and especially a son’s - two sons’ - respect for their father.   First Chris’s piece; and then Andrew’s eulogy at his father’s funeral. The second is a bit long, but they are both worth listening to in their entirety.

Naturally, if you find yourself getting all sentimental and going overboard with adulation, it’s not a bad thing to step back and not take yourself so seriously. Have a good laugh at the human weakness that is hero-worship. Which is what Randy Rainbow has done, in probably his best composition yet. He quite evidently is as taken with the Cuomo Brothers as I am. And has the talent to create a brilliant parody of our fascination with a spoof on Grease's "Sandy." Have a listen.  Here's a link to Randy's "Andy" version.

And speaking of credit, much as I'd like to claim "Cuomosexual" as my own idea, it's Randy Rainbow's.

The Road to Edmond - a film review 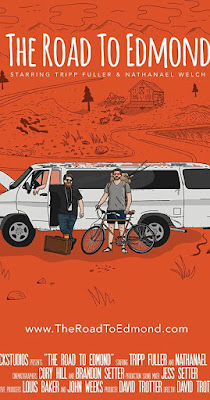 If you’ve spent a lifetime undoing the self-loathing that comes from growing up in a fiercely homophobic environment created for the most part by toxic religion, you naturally want to applaud when a Christian shows up who clearly wants to detoxify his church. Even if your main issue with the church is its irrational faith-claims, and not its homophobia or its pre-modern patriarchal culture, you still want to recognize a friend when you see one. After years of church-bashing, I always welcome the opportunity to cultivate a more nuanced view of organized religion, shun the Bible-thumpers, and seek common ground with the seekers.

That’s the approach I’d like to take with Tripp Fuller, the co-author of Transforming Christian Theology and the man behind the pro-gay film I came across the other night on Amazon Prime Streaming entitled The Road to Edmond. I’d love to embrace the theology student and thank him for his efforts.

My problem is I love movies. And in evaluating them, I think they should be judged as works of art by world-class standards, and not let off the hook when they flop. The Road to Edmond is a really bad movie, amateurish, plodding and way too long.

Fuller himself play Larry, one of the two characters in the story, a pastor who meets the other character when he runs over his bike and offers to take him where he is going as a way of making up for his carelessness. The other character is Cleo, another pastor, a youth minister who has been furloughed by his church for telling a lesbian teen that God loves her just as she is, rather than following the church’s practice of admonishing young people to stop being LGBT and get right with the Lord.

The film is painfully didactic from end to end, and the undisguised effort to accomplish what progressive Christians might call putting Christ back into the church makes this a message movie, not a work of art. The theological questions that pop up here and there are answered with unhelpful slogans rather than clear thought, so what might be a portrayal of a troubled soul turns out instead to be a preaching of dull sermons to the choir.

I won’t reveal the surprising plot twists - to give credit where credit is due - in case you want to watch this flop despite my criticisms. Gay Christians might see things in a different light, and more power to them.

An A for effort. A C-minus for the finished product.