Laugh if you're up for it 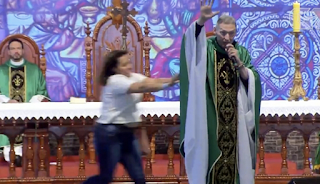 Sometimes a banana is just a banana.

And sometimes you just have to let yourself laugh when somebody falls down the stairs. Or, in this case, gets pushed off the stage.

That's what happened to Father Marcello Rossi,  a priest in Sao Paolo, Brazil, the other day.

It's mean. But it can be funny, if the person falling is in clerical drag and you've wished your whole life something like this would happen to people who collect a salary for proclaiming God doesn't like gays or uppity women or people who practice birth control. Whose boss actually declared (until 2010) that condoms must not be used to fight AIDS.

Don't get all righteous on me and tell me it's not nice to wish other people ill. And don't waste time insisting your ethical system would be OK with pushing Hitler off the stage, but this priest is no Hitler.

Of course he wasn't. And decent man, child molester, homophobe or nebbish, it really doesn't matter. Of course we should all put ourselves in his place and ask how it would feel being shoved off a stage by somebody who doesn't like you. Or at least doesn't care if you get hurt or not. Of course he doesn't deserve to be dealt with violently.

But what are we to make of the reaction to this incident? After you watch this video, take the time to read the commentary. Most of it is celebratory. Most people who took the time to tune in are glad to see a Roman Catholic priest "get what's coming to him."  Look how many comments refer to the child abuse history in the church. Or the homophobia. To say there's no shortage of resentment of the church being expressed here would be a gross understatement.

Unfortunately, from what I've been able to dig up so far (and I admit I haven't really dug that far) we're not clear about the background to this event. Was he preaching that God doesn't like fat women? Was the pusher a crazy lady? All innuendo so far; very little real background information.

You have to ask yourself, could he have been that stupid? Or is this fake news?  Is the resentment expressed in the commentaries against this priest, Marcello Rossi, as an individual or as a member of the RC clergy? Can one argue that this incident is emblematic of the loss of prestige of the church? Or is it just one of those events out of the blue?

I remember a time gone by when we turned the knob on the TV set to listen to Walter Cronkite tell us about the important events of the day. The term "fake news" had not been invented. The priests in my home town visited all their parishioners once a year to update their estimates of how much money they could probably afford to pledge to the church's coffers. Nobody would dream of laying a hand on father. My friend Tommy went to confession every Saturday to store up enough good vibes to be able to resist touching his girlfriend's boobs that night. He always failed, but that gave him material to take into confession the following Saturday.

I'll admit, I didn't just laugh; I guffawed when I saw the good father bite the dust. Too many years of stored resentment for my better nature to call the shots. Second thought: I hope he didn't get hurt. Third thought: maybe we can start a new trend. Fourth thought: Sure hope this doesn't backfire and create sympathy for this sexist, homophobic crew that is the clergy.

Fifth thought: I wonder how many people I know out there are wondering why I don't get a life.

Ramil at the barre


It seems unsportsmanlike, somehow, to single out one particular dancer from an ensemble, but ever since I came across this guy Ramil Gurbanovich Mekhdiyev the other day, I can’t help it. He’s drop-dead gorgeous in my estimation, dances like a house afire, and I’ve been going from one video to the next marveling at his range and skill. To say I could watch him all day long would be redundant. I have been watching him all day.


When I sent around a link to his “shimmer and shake” dance the other day – that trio doing a Kalmyk folk dance where they dance on their ankles part of the time and make like jello – I knew I had noticed him before. He must have some kind of special status among the Moiseev dance troupe because they placed him at the front of the lineup of that wonderful video of the troupe that starts out with them all practicing at the ballet barre (that’s French for that bar where you stand tall and stretch your legs and point your toes.)

Have a look at young Ramil doing his primus inter pares thing here. The girls start the heel-and-toe, and then the boys kick in. This part of the video instills more excitement than the introduction to The Orient Express where all the characters are first introduced and then the train chugs out of the station and you know you're in for a hell of a ride.

I don't know much about the guy except that he was born about ten minutes ago, according to my notion of time - about the time I was getting my doctorate and heading off to start the last chapter of my teaching career in Japan. OK, thirty-one years ago, not ten minutes ago. You know what I mean: young. He began dancing lessons at the age of six at the Adagio Choreographic Studio (I'm sure there's a more mellifluous translation) and just look at him now!

I think his name is Azeri (from Azerbaijan). At least I found five other "Ramil Mekhdiyevs" of Azeri origin on LinkedIn. But he was born in Moscow.

That's probably enough information if you want to become a groupie, or at least follow his career. If you just want to watch him dance, here is a link to a pot pourri of his dancing numbers.

The group of which he is a part is called, in English, the Moiseev (or Moiseyev) Ballet. Russians, not as inclined as the Americans to keep things short and to the point, call it the "State Academic Ensemble named after Igor Moiseev" (Государственный Академический Ансамбль имени Игоря Моисеева - gosudarstvennyy akademicheskiy ansambl' imeni igorya moiseyeva). Аlso goes by Государственный академический ансамбль народного танца под руководством Игоря Моисеева (State academic ensemble of folk dance under the direction of Igor Moiseev) - GAANT for short.

Good artists regularly push themselves to the limit. These guys, though, raise the bar. Athletic as Olympians, disciplined, and talented as they come. YouTube has videos galore, one more impressive than the next.

Here's just one sample, to show you some of the folk Ramil calls colleagues. They're doing their spiffed up version of the folk dance Yablochko (Little Apple), a Russian sailor's dance.

They are not really sailors. They're dancers. Tantsovshchiki, to use that wonderful Russian word. And the song has nothing to do with apples.

Found a comment by Ramil on RT about the cost, in pain, of being a Moiseev dancer. Also comments on the pressure to keep the focus on the ensemble and not allow stars like Ramil to stand out.