First fell in love with the voice of Azi Schwartz – can’t remember when, exactly.  It may have been the anniversary of 9/11 in 2015, where he appears at an interfaith prayer service alongside the Pope, chanting a Jewish prayer for the fallen. He first sings the memorial prayer adapted for the victims of 9/11 and then follows with the Oseh Shalom, in which he’s got even the cardinals singing along. Shows you what he’s capable of.

Here he is singing at a memorial at the U.N. for the Holocaust.

And here he is singing in Budapest (with a little crowd-pleasing introduction in Hungarian):   The occasion is the 60th anniversary of the founding of Israel, in 2008.  They picked my 8th birthday, May 14, 1948 for the actual founding date. Not that I want to make this about me, but you have to admit that’s a powerful way to get your attention.  Anyway, Sim Shalom.  A lovely melody. Romaji and English translation available here.

Here’s a more informal version of it, where Azi sings it along with the song’s composer, Zina Goldrich.

And here he is, in his home synagogue, the Park Avenue Synagogue in New York, leading the congregation in L’kha Dodi.  Romaji and English here.

And here he is with the Israeli Philharmonic singing the world’s most beautiful national anthem.

Doing the Hasidic Kaddish, with fellow good-looker rabbi, Elliot Cosgrove.  Watch till the end, and you’ll see what a hard act Azi is to follow.

Rehearsing with the Berlin Chamber Choir, in 2013, preparing for a concert commemorating the 75th anniversary of Kristallnacht. (snippet only, unfortunately cut off way too soon.)

Another recording in Germany, this time with the RIAS Chamber Choir in Potsdam.  Adonai, Adonai

How times have changed.  Can’t help noting some serious future shock here.  Potsdam today is a suburb of Berlin as well as the capital of the state of Brandenburg. It is known to historians for being the site of the Potsdam Conference, where Churchill, Stalin and Truman got together to decide what to do with the defeated Third Reich in 1945. And to tourists today mostly for being the location of Frederick the Great’s famous palace, Sans Souci. But when I lived in Berlin in the 60s, it was still the home of the occupying Russian Army. Very much East Germany. Not the Russian sector of Berlin, but East Germany itself. And here is Azi singing part of the Jewish High Holy Days liturgy with the RIAS Chamber Choir. RIAS stands for “Radio in the American Sector.”


And I’ll end with the Kol Nidre, the Aramaic prayer sung on the eve of Yom Kippur, the Day of Atonement. It’s a modern version, sung a capella.

If you want more, there’s an abundance available on YouTube.

Did I tell you I’m coming back as a cantor in my next life?  That’s the plan, anyway.

Not all romance and stars

I posted a dash through the park yesterday of some of my favorite absurdist musical numbers from the 20s and 30s, wanting to share my hobby with others, even though I know not one in a dozen people I know, even close friends, have any interest at all in such esoterica. No matter. That, I always say, is why God made delete keys. And every once in a while somebody will write me and let me know they listened to some musical piece with fresh ears, and that gives me no end of pleasure. Music is the cement that keeps the bricks together in the house of sanity. Escaping to cheap entertainment as a way of surviving the rigors of reality is one thing. Finding refuge in music, regardless of the genre, in my view, serves the same function, and provides so much more reward in the process. Even the silly songs of yesteryear.

That said, though, I have to admit in searching for such esoterica as "Who's Afraid of the Big Bad Wolf" in French (since yesterday, I've found a wonderful Django Reinhardt version, by the way), I've also found a whole bunch of stuff that makes the real argument for not surrendering to nostalgia. Evidence, as if we needed it, that the "good old days" were anything but free of prejudice and provincialism.

Max Raabe argues his preoccupation with this music should not be mistaken for nostalgia, but recognized as an appreciation of a classical music form. And I give him that. I'm not sure I'd go so far as to refer to "my little cactus" and "the things Ruth does for me" and "Amalie goes to the baths with a rubber gentleman" classics, but there is a timelessness about the energy and the uplift of big band music and absurdist comedy - think Charlie Chaplin and Laurel and Hardy. They all still work, nearly a century on.

Where things get problematic is when we dip into the cultural goings-on of the 20s and 30s and tap into some of the things that we have done well to escape, reasons to appreciate this thing called social progress through consciousness raising. We still have racism and anti-Semitism, but they are now peripheral to society. Except for the occasional backsliding - to wit, our very own Trump administration - we are not going to return to the time when anti-Semitism was official government policy in Germany and informally in most of Europe and in America as well. And segregation, cultural as well as physical, was evidence that the slaves had not actually been freed, but only nominally relieved of some of the harshest aspects of American treatment of dark-skinned people.

I sent around a video yesterday of one of the silliest things I've seen in a long time - a dancer hoofing it to the tune of a ditty about dancing the Black Bottom with the Hottentots.  I went ahead and sent anyway because it was so over the line, I thought, beyond racism and into silliness, and because I don't spend enough time being silly.

Here are a couple more samples - at least I thought they were at first - of the kind of bad taste stuff that pops up when you go digging in the past.

Makes you sit up straight and take notice.  The words go:


But what about this?  Here's another Foxtrot.  Actually, a "one-step": Der Neger hat sein Kind gebissen ("The Negro bit his child.") 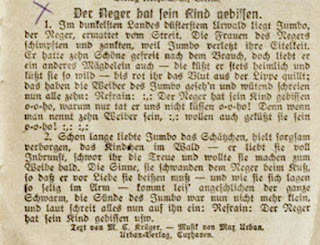 In the darkest forest of the darkest land lives Jumbo, the Negro, exhausted from fighting.
The wives of the Negro scolded and fought with him, because Jumbo wounded their vanity. He had ten beauties, freed according to custom, but loved another maiden as well, whom he always kissed in secret. And so violently that the blood flowed from her lips. The wives saw that and cried, all ten of them:

What do you make of this example of Culture A seen through the eyes of Culture B, I'd like to know. It's racist, for sure.  (They refer to the protagonist as "The Negro," rather than sticking to his name, for starters.) But is it racism pure and simple?  Or arguably more of a question of naïveté?  Irony? Camp?  The sense of humor of a seriously screwed-up bunch of wackos, maybe? Put your anthropology hat on before answering.

Or, like its composer, M. C. Krüger, just an isolated piece of trivia, all but lost but for the advent of the internet.

I mean, he's not up there with the likes of the Kardosch Singers, especially Rudi Schuricke.

Here is Rudi singing "J'attendrai" in 1939.
And here's Max Raabe opening his Waldbühne concert with it, in 2010.


Posted by Alan McCornick No comments: