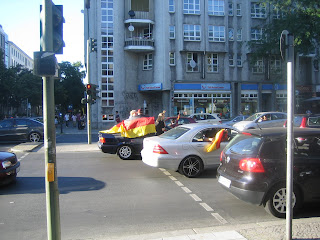 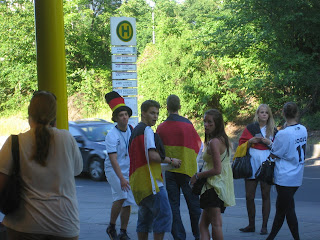 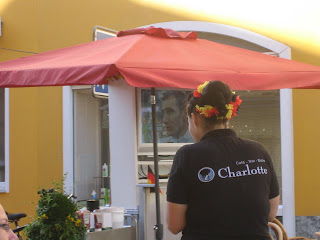 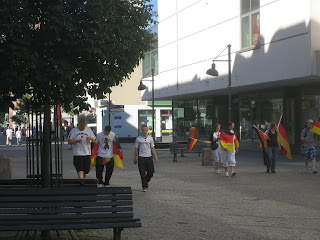 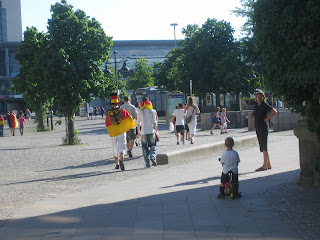 Man, has this country gone nuts. Went out today and didn’t think I was going to get home. The bus turned off its usual route and headed for Bahnhof Zoo. I went up and asked the driver whether he was going to go back to Charlottenburg as the sign indicated was the next stop.

He looks at me and says, “Ik fahr zum Zoo, Meister. Woll’nse aussteigen?” (I’m going to the Zoo, governor, you want out here?) Apparently he decided I was too dumb for a straight answer. All Berlin seemed to be in the streets, and the busses went where they could, not where they were supposed to go.
DEUTSCHLAND! DEUTSCHLAND!

From all directions. Thousands and thousands of people in the streets. I got out and walked to the Ku-damm thinking I’d catch another bus. The Ku-damm was totally blocked. I had the choice of walking or taking the subway miles out of the way. In the subway it was the same story. By now the crowds were getting drunk but at least the trains were moving.

All ages, draped in the black-red-gold German flag. Real tribal. Have never experienced anything like this.

On the trains people were talking to each other. Everybody got into it. Never saw such a universally high mood as this.

For somebody my age, this is a remarkable event. In the 1960s, in the Army Security Agency, when we were sure there were no Germans around – and no Brits – we would let loose with the black humor and say things to each other like, “Gott strafe England!” (God punish England!) among ourselves. http://www.psywarrior.com/GottStrafeEngland.jpg - A greeting used by Germans during the First World War. That phrase came to mind today when I saw all those kids wrapped in the flag celebrating the German victory over England. But there were no anti-English remarks. Only unabashed horn blowing and DEUTSCHLAND! DEUTSCHLAND! Shouting.

It’s so easy to despair over the progress of the human race. Sometimes it seems like one step forward, two steps backward. But today, it’s not Gott strafe England. Instead, the Germans beat the English in a ballgame and Germany went insane with joy. Tomorrow, they’ll nurse their hangovers and go back to renting English language movies from the video store.

After all, a very large part of those shouting DEUTSCHLAND! DEUTSCHLAND! today were not even born – or were no more than two or three years old – when the Berlin Wall came down. At Number 1 Karl-Liebknecht Straße, right across the Spree from the Berliner Dom, where thousands of tourists get on boats everyday for a cruise down the Spree, is the DDR Museum. You can go in and sit in a Trabi, see a model East German kitchen , complete with appliances, a living room with books on the shelves extolling the workers’ paradise – and on your way out buy cups and glasses with the DDR flag insignia. Twenty years after the fall, and the country has to be explained in a Disneyland setting for the citizen of today. To these kids shouting DEUTSCHLAND! DEUTSCHLAND!, even a divided Germany is history. Germany and England at war? That’s ancient history.