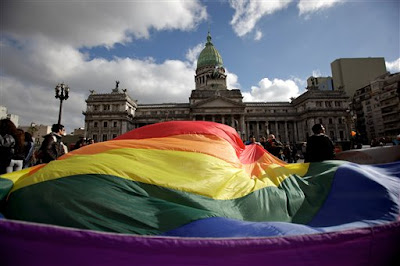 Just a couple hours ago, at 4 a.m. in Buenos Aires, the Argentine Senate approved same-sex marriage. In Argentina, that means there’s still plenty of time left to dance in the streets before calling it a day. It had passed the House of Deputies previously, and when the Argentine Senate passed the bill with 33 to 27 and three abstentions, since President Kirchner has said she will sign it, it was a go.

Argentina is now the tenth nation to approve of marriage between same-sex partners, the first in Latin America, although Mexico, like the United States, has legalized it in its capital city, and same-sex union rights are recognized in Uruguay and Ecuador and to some degree in Brazil and Colombia, as well. But if you’re gay, and lucky enough to live at the top end of the Western Hemisphere, in Canada, or now, in this country, whose flag I once said was the only one I would consider wearing as an emblem, you have full civil rights and dignity as a gay citizen. There are no lines drawn against you.

May this civil right also come one day to foot-dragging nations like Paraguay and the United States.

¡Que vivan España y Los Países Bajos! - Spain and the Netherlands, both of whom reached the final battle of the World Cup, and caused many a gay liberation advocate to note in passing that, no matter who wins, it was going to be a country with full civil rights for gay people.

¡Que viva Alemania! - Germany, which has a capital city where I sat down to dinner the night before last out on the sidewalk at Stuttgarter Platz and noticed at the next table was Klaus Wowereit, the Regierender Bürgermeister (Lord Mayor), eating the same linguine al salmone as me. OK, I think that's what he was eating. I know it's what I was eating. And nobody was paying him the slightest bit of attention. Except me, who was wondering if the guy he was eating with was his husband. Could well have been.

Oh, and no nos olvidemos de Irlanda – let’s not forget Ireland - where the Seanad Éireann just passed new civil rights legislation making same-sex unions much more like full-fledged marriage. Seanad Éireann, that’s Irish for “Irish Senate” in the national language. Spoken, as Columnist Medb Ruane pointed out in The Irish Times recently, by fewer Irish citizens than there are gay Irish citizens. But who’s counting, when it comes to identity?