Here's the Finnish national anthem, sung by the Vocaloids.

You may notice a similarity in the two melodies. But that's only because the two countries have the same melody for their national anthems.

Which was written Fredrik Pacius, who set to music a poem, entitled Maamme, in Finnish. Except that he wrote it in Swedish, of course, and in Swedish it’s Vårt land. Not the best choice of words, when you consider that Pacius was German and in German v is pronounced like an f.

Which makes you wonder if this guy maybe had a chip on his shoulder, possibly because he allowed Alla Pugacheva to talk him into using her hairdresser.

Here's a picture of the guy, showing both his hair and his Napoleon complex, as well as a picture of Alla Pugacheva of "A Million Roses" fame (see previous blog entry.) 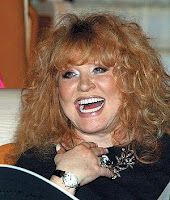 Why the hell the Finns used a song composed by a German when they could have used Finlandia, that magnificent piece by Sibelius, their national folk hero and, I would venture, much better composer.

Could it be because, when he got older, his hair went where Pugacheva and Pacius’s probably should have gone? Here’s Sibelius before and after. 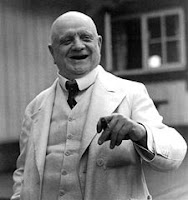 And here’s a particularly lovely rendition of the Finnish/Estonian national anthem, played by Jimi Hendrix.

Sorry. Just kidding. It’s not by Jimi Hendrix, but by Jämmi Hendrik, no apparent relation, although I can't guarantee he's not related to Estonia's president.

Another question driving research is why the Estonians had to go and name their version after the world’s leading terrorist. It’s called, “My Fatherland,” or, in Estonian, “Mu Isaama.” I’m sure that’s pure coincidence (but what do I know) but it does suggest that there may be a curse on this little ditty, if it inspires both fear and fart jokes.

And the unfortunate fact that in Chinese Runeberg is pronounced "Looneybird."

Listen for yourself to this Chinese man giving some background on the author. It probably explains why, when the Chinese introduction is translated into English, the nice lady tells us his name is Johan Ludvig and leaves out his last name altogether. They then play the anthem and leave out the words. The ones written by Runeberg. They don’t make any mention of the fact that Runeberg (with a Swedish name, please note) apparently wrote it first in Swedish.

The Finnish and Estonian languages are quite similar, but since I know neither language, I can’t tell you how and to what degree. I do know that, in Estonian, kuulilennuteetunneliluuk means "the hatch a bullet flies out of when exiting a tunnel” and that the longest word in the Finnish language is epäjärjestelmällistyttämättömyydellänsäkäänköhän, but since neither of these words has anything to do with their national anthems, this is probably not very helpful.

You can tell that Finns and Estonians are very close by the number of comments on the YouTube site by Finns saying that the Estonians stole their anthem and, by the way, are all whores. But one doesn’t judge a country by its YouTube commenters.

Much better to judge the world by the lovely young people who sing their national anthems cacaphonically, each in their own tongue (Estonian – keel; Finnish – kieli).

Which makes me wonder if we couldn’t get the Israelis, who appear to have stolen their national anthem from the Czechs (and hidden it in a minor key) to share it with the Palestinians. Pretty much all else has failed. A Hebrew/Arabic version sung simultaneously is certainly worth a try, wouldn't you say? With somebody of Toscanini's calibre directing, of course.