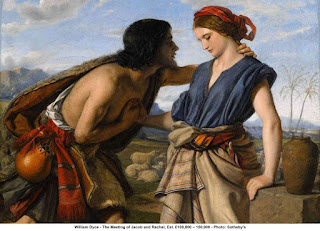 These gays have got it all wrong.

They’re all pissed off at this fast food chicken guy for looking to the Bible for inspiration.

I mean if tons of kids in Britain these days are being christened William and Kate, and given that the most common male name in the world is Mohammed, why can’t this guy Cathy go to the Bible for answers?

If you turn to Genesis, Chapter 4, verse 19 on to the end of the chapter, for example, you’ll read:

It goes on then about Zillah’s kids, the brass and iron workers.  No explanation why old Lamech needed two wives.  Just that he had two at the same time.

Two Hittite girls in one year.  What a way to thin the blood of the Hebrews.  That can’t be right.  But it’s in the Bible!  I do wonder why three wives, though - at forty, you have to assume he already had at least one more wife.  But they don’t tell you.  Guess it wasn’t important.

And you remember the story of Jacob and his sister-wives Rachel and Leah who he went in unto one after the other.  Leah first gives birth to Reuben.  But she doesn’t stop there, and when she gives birth to Simeon and Levi as well Rachel gets really pissed “because the Lord had opened up her sister’s womb” and not hers, and she says to Jake (Chapter 30):

Give me children or else I die.

Now this kindles Jacob’s anger against her, we are told, and he lashes out: “Is it my damn fault you can’t have kids?”  (We know it’s not his fault, because Leah is so very productive, you see.  We’re also told the Lord opened Leah’s womb, and one has to wonder what he had against Rachel that he didn’t open hers, but that’s another story.)

Behold my maid Bilhah, go in unto her…

I won’t go on.  I’m sure there’s a Bible you can find somewhere if you want to hear how it ends, this race to see who can get Jacob, with the Lord’s help, to give her the most children – using slave girls when the original equipment is faulty.  Don’t you love it how readily Jacob goes along with all this going in unto business, by the way?

The whole damn Bible is full of great shit like this.  All about begatting mostly.  And it’s not just two or three wives, either.  Check out II Chronicles 14:21 and you’ll read:

Really.   Check it out.  The Bible’s not everybody’s cup of tea, but it’s better than science fiction sometimes.

I think that’s all this Chick-Fil-A guy with the strange last name – Cathy – was after when he suggested we should support biblical marriage.  Don’t know how many wives he was suggesting, and I hope he wasn’t suggesting we name our girls Zillah and Bilhah, but it’s good the guy has a hobby of reading the bible for inspiration, I think.

I know, I know.  Gays have their tits in a knot because he went and told some Southern Baptist guy that he supports "the biblical definition of the family unit."

That’s what the gays are all upset about, right?  The fact that the Baptists have their origins in support for slavery?  I mean it can’t be because this man Cathy would seem to be in favor of shtupping his wife’s sister, can it?

I get so confused.  Maybe somebody can fill-A me in.

picture of Jacob and Rachel: