If I were a Catholic, I’d have to go to confession over this.  I suffer from a superiority complex when it comes to TV evangelists.  I know such arrogance will keep me out of heaven, but I can’t seem to stop the urge to giggle uncontrollably whenever I see one of these clowns at work.   I’m easily persuaded they’ve been put on this earth to make the rest of us look good.

Watching them prance back and forth across the stage, all puffed up and filled with the spirit, so all-fired certain they’re doing the work of the Lord.  What’s not to giggle at?

And there are so damned many of them!  For a list of American evangelists, click here.     What a wacko country we live in.  My Australian friends love to tell me, “We got the prisoners; you got the Puritans.  Lucky us!”   Sociologists have told us it’s this separation of church and state idea we came up with that is responsible for all these many religious sects.  Places with an established religion get tired of it fast.  Here, when you get tired of your church, you start a new one.  Say the name of Jesus with a quiver in your voice, whip up a tale about a struggle with alcohol and a penchant for loose women and a conversion story and you’re in business.  No taxes.  No proof of sincerity required.  Call it religion and off you go.  All the shekels you can collect are your own.

I’ve had so many favorites over the years.  Jim and Tammy Faye Bakker, for starters.  And Jimmy Swaggert.  Loved their hypocrisy.   Watching them crash and burn a la Ted Haggard was more fun than the pile-ups at the stock car races my father used to take me to as a kid.   You suspected there was decency in there somewhere and you can see why people have invented demons and other living creatures to personify temptation.   Like so many people who stumble over fame and fortune, they’re not ready for it.  Clueless about how the adulation can fool you into thinking it will go on forever.


I used to watch Oral Roberts as a kid, wondering about the science of putting your hands on your TV set and getting cured of cancer.  Jack Van Impe and the way he would dwell on the final consonant of a word and his lovely wife with the science fiction name, Rexella.  Dumb as her shoes, but earnest as a case of the shingles.

Then there are the politicos who rose to the top, starting with Billy Graham.  He was of the Amy Semple McPherson variety, not seedy, even lofty, although now that he’s gone, his son Franklin is doing his best to bring the Graham name down to the level of most of their fellow shysters.   John Hagee is actually dangerous, suckering all those evangelicals into supporting the rightwing in Israel by making them believe their money will convert the Jews, a necessary last step before the Rapture.  And shame on the Israelis who milk this source – the same way they threw their lot in with apartheid South Africa when it served their interest.  Hagee, the Lucky Pierre of evangelism – screwing people and being screwed simultaneously.

And, speaking of danger, let’s not forget James Jones, who, before he got his flock to drink the Kool-Aid in Guyana, was a TV evangelist from Detroit.

Then there’s the king of the sleazy smarmies, Jerry Falwell, and the Big Daddy TV Evangelist of them all, Master Joker Pat Robertson.  Together, they declared that 9/11 was brought on by “the pagans, and the abortionists, and the feminists, and the gays and the lesbians…the ACLU, People for the American Way…I point the finger in their face and I say “you helped this happen.”  That was Falwell.  Robertson’s response?  “I totally concur.”

If you poke around in their backgrounds, you find a large number of them come from evangelical families.  Hagee, for example, is a 5th generation pastor.  Many are Pentecostalists and have little formal education, even creating their own institutions to grant themselves degrees in theology.

And then there’s the exception to this group, Gene Scott, possibly the most inflated ego of all time.  He used to come onto his program wearing a series of hats, cowboy to turban, and shout at the top of his lungs that he wasn’t going to preach another word until his followers coughed up more money.  And he’d sit there – they’d all sit there – in silence, waiting for the phone to ring.  Scott got his degree from Stanford in the School of Education,   I get to say that Scott and I got the same education, only a few years apart.  His shtick was to fill a whiteboard with passages written in the original Hebrew, Greek and Aramaic, and impress his audience with his ostensibly erudite ways.  Look closely at what he was saying, though, and you see the linguistic bravado as pure theater.  When he died, his wife Melissa took over, using the same pseudo scholarship as a substitute for authenticity.  Look behind the meanings of the words they trot out and you see a very simple declaration of their faith.  Nothing wrong with that, except that the suggestion of scholarship was little more than smoke and mirrors.


The shysterism is harmless if it you believe it’s your God-given right to spend your money any way you choose.  It’s part of our libertarian tradition that we consider the freedom to be stupid to be the foundation of all other freedoms.  I suppose, if you want to put a positive spin on TV evangelism you might take this to heart.  You might also consider how many lessons there are to be learned from their failings.  Jim and Tammy Bakker's son, Jay, for example, hit the skids after their demise.  Now he's back with the goal of ministering to gays and lesbians.

All this is just a circuitous way of getting to the news that Harold Camping has died.  Of all the TV evangelists I ever came across, he was the most sympathetic.  I went through a wide range of emotions with this guy over the years.  The first time I saw him I howled with derision.  Such a loser!  Such a sadsack!   Then I realized he was like all the others.  He had raised millions from donors with his end of times predictions. Not such a dumb-dumb after all, I thought.

But what to make of his apparent sincerity?

And what an example of dull boring Middle American beige consciousness.  A friend of mine wrote of him, “He could be Mr. Rogers’ brother! If Heaven exists, it’s a grand reunion and a beautiful day in the neighborhood.”   His clothes were off the rack at Goodwill.  The furniture was all Toledo discount house.  And the plants were fake!  Who in the world lives with artificial plants?

I was raised in a culture that taught me never to expose myself in public unless I knew what I was doing - never say anything unless I was sure I was right.  A lot of what New Englanders of my childhood called common sense rubbed off when I came to California, where people tend to believe your right to speak is a higher priority than your responsibility to have your facts right, but it still amazed me how so many people – certainly some of them have to be sincere – can stand before millions and make declarations about their faith without the slightest humility.  Not listening for the voice of God but shouting it from the rooftops, to use an old metaphor for satellites that bring their messages to millions in 150 countries around the world.

Harold Camping’s abundant confidence lacked smugness somehow.   He knew his Bible so well he could flip to a passage in nothing flat, when a caller asked about it.  He sat with the bible on his lap.  He lived not far away from me, here in the East Bay, in Alameda.  He predicted the end of the world would be first on September 6, 1994, and when it didn't happen, he changed the date to May 21, 2011.  And when the end didn't come, he revised it to October 21, 2011. 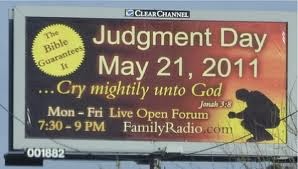 It still didn't come and he retired.  He had spent five million dollars on billboards advertising the Rapture, and began losing money when donations dropped off precipitously.  Down from $135 million in 2007 to $29.2 million in 2011.  But still he remained Mr. Unflappable.  Looks like I got it wrong, he said.   “That’s because God has his ways and they are greater than mine.”  Can’t argue with that.  There’s a great YouTube of a guy shouting at him, here.  (The quote comes at the end, at minute 2:31.)

Caller: “You always say a lot of shit.  I lost all my money because of you, you asshole!
Camping:  I’m sorry.  I didn’t hear your question. (pause)  We’ve lost the caller, and shall we take our next call?

I almost miss watching him sit in that chair of his and interpret the Bible in that room with the fake woodpaneling and artificial plants.  The dull image made you feel sorry for the old man, plodding on with his advice and his end of the world predictions.

Harold Camping lived to a ripe old age.  When Jerry Falwell died, because he had spent his life preaching the message that he would go to heaven and gay people like me wouldn’t, I announced that if somebody would bring me a contract to go to hell, I’d sign it – anything to make sure I didn’t have to spend eternity with the likes of Jerry Falwell.

Camping and Falwell shared a belief in the Rapture and in end times.  Falwell died before his charlatan ways were exposed.  He was far too political to say anything he couldn’t weasel out of later.  Camping died after being humiliated because he went out on a limb, exposed himself as a silly old man with old man limitations.  He was wrong, he said, once he had gotten over the shock of still being alive.  His defeat was, in a sense, a reminder to me of my own limitations, and for that I see him apart from all the others.  He’s gone on, now, as they say, to his reward.  Not a bad man, I think.  If there is a heaven, I hope he’s got a better seat than Falwell.

RIP, Harold.  Flipping channels has suddenly lost much of its appeal.