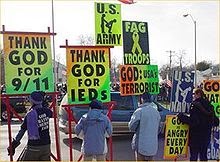 “The Lord works in mysterious ways, his wonders to perform,” runs the 19th Century hymn by William Cowper.  The phrase ran through my head this morning when I heard the news that Fred Phelps of Westboro Baptist Church is dead. 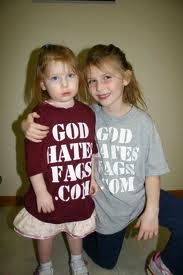 I know if you check the gay chat lines you’re bound to find thousands of people wanting to buy tickets to go to Topeka to dance on his grave.  But I find the vindictiveness unbecoming.  And, in fact, badly misplaced.  In the long run, Fred Phelps and his family church, of “GOD HATES FAGS” (invariably in caps) fame, did the LGBT world more good than harm.  Like Anita Bryant before him, the Phelpses failed to understand (or maybe they did understand – how can we be sure?) what a favor they were doing the cause of gay liberation. All those people out there on the fence claiming not to know any gay people who had no reason to get involved.  All those folks outraged at the virulence of the Westboro Baptist Church’s claims to be speaking in the voice of God.  How could they not conclude that if Phelps was after you you couldn’t be that bad?   It also helped, of course, that they also stomped on the American flag and celebrated soldiers’ deaths as well the death of gay people.

I remember hearing about them when Matthew Shepherd was murdered in Wyoming, and they picketed his funeral.  Something clicked when I went to their website – godhatesfags.com and found an image of Matthew Shepherd “burning in hell.”  He’s been burning in hell for 5639 days as of this writing, to be exact, according to the website.  How do I know?  The site is still up!  And I note, in passing, that Matthew's mother, Judy, also acknowledges how much Phelps' hatred helped to keep Matthew's memory alive.


This degree of troublemaking had to stem from a seriously disturbed mind.  Nobody could spend all their time, as Phelps evidently did, poking sticks at the whole world.  He took on the U.S. Marines, Jews (“Jews are the real Nazis”) Muslims,  and the entire Chinese nation.  After an earthquake there killed 70,000, Phelps prayed "for many more earthquakes to kill many more thousands of impudent and ungrateful Chinese."     His family even picketed the funeral of the kids killed at Sandy Hook Elementary School. 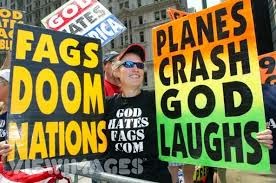 What puzzles me is not that there is a mad dog like Fred Phelps running loose – his kind are found in churches everywhere – although he obviously took it to an extreme nobody else I ever heard of could match.  What puzzles me is how so many of his family could go along.  Get law degrees and keep America’s primary hate institution going, like they did.

It used to worry me that some gay person thinking he was doing the world a favor would assassinate this kook and make him a martyr and set the gay cause back years.  Fortunately, that didn’t happen, and Phelps has found his way to his reward through natural causes.

Because he made the world see the irrationality of hatred of gays and others, I almost wish I could believe in a Maker who runs the world like the manipulator of a marionette.  That Phelps and his kin were all on strings and Big Daddy in the sky was giving his gay and lesbian children a helping hand.

I could then say a little prayer of thanks for taking his servant Fred home.  Welcome home, Fred.  Homophobia is much weaker now than when we first put you to work.  Come sit over here.  Your job is done.

I don’t know yet what work we’ll have for you to do in heaven.  I’ll check on that and get back to you within the next million millennia.

Till then, sit tight in your seat, Saint Fred.