Pink Martini and the von Trapps 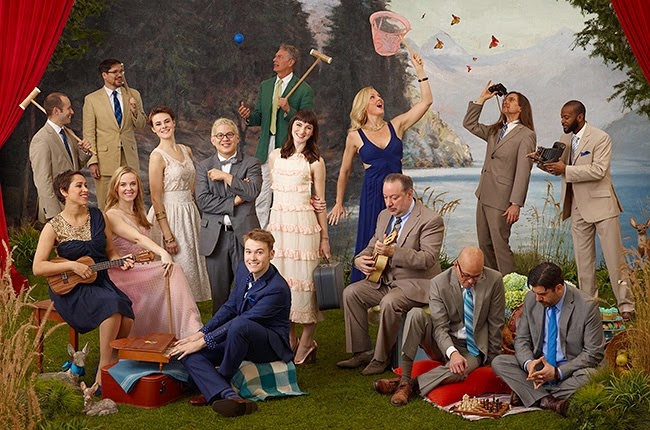 For the fourth or fifth year in a row, Taku and I went to a Pink Martini Concert at the San Francisco Symphony the other night, this year accompanied by friend Jason.

As I was leaving I remarked that I thought going in that perhaps this would be the last time for a while.  They tend to do mostly the same songs, and we have them on the stereo constantly, and it might be getting a little thin. Walking to BART from the symphony afterwards, though, I had to admit how badly I called that one.  I enjoyed it this year as much as I ever did, and learned for the nth time how much better any band can be live than on CD.  And how much better the Pink Martini are when backed up by the San Francisco Symphony.

What a treat.  From start to finish.

This year there were two unexpected and very pleasant surprises.  If you don’t know the group, it’s headed by a brilliantly talented guy named Thomas Lauderdale.  A party guy who is also an accomplished concert pianist.  And for many years the focus of the group was on the singer, China Forbes.  But China Forbes needed surgery on her vocal chords a while back and they brought in a substitute, with an equally unusual name - Storm Large. She was obviously a good fit, because she stayed and now the group officially has two female singers, as well as a male back-up who usually does a solo or two.

Taku was into their music early on.  I heard them back then as background music, but wasn’t particularly taken.  Some sort of a non-descript salsa band, I thought to myself. Only when Taku and I were visiting friend Linda in Portland just at the time Pink Martini was returning from its first national tour and giving a concert at the Zoo, did I become a convert.  I was blown away by the atmosphere.  And I’ve learned since that this group, more than any I’ve paid attention to before, needs to be experienced live.  They create a magical atmosphere.  Don’t know how that works, exactly.  Sometimes they play songs at what I think is a slow pace.  Sometimes the choice of themes is odd.  Lots of songs are in languages other than English and you don’t know what they’re saying.  And yet, in live performances, song after song, the performances are captivating.

If you don’t know them (and even if you do), have a look at this site.

Click on one or more of the songs.  To start over, click on the refresh icon to get back to the page.

Some interesting background is available in this interview with Thomas Lauderdale:

Or if you just want to listen to some of their songs, let me suggest this haunting Romanian one, which may remind you of Ravel’s Bolero, sung by Storm Large: Până când nu te iubeam.

Or one of their best known: Donde estas, Yolanda?

This year, Thomas Lauderdale spoke to the audience about how his love for The Sound of Music lead him to the discovery that four great grandchildren of Maria and Captain von Trapp have kept the family tradition going and are currently performing as a quartet.  He evidently convinced them they needed a mentor and attracted them to Portland, the place Pink Martini call home. The collaboration is very obviously paying off.  You can see that in some of the songs they have written and performed since expanding away from their Austrian folksong days.

Dream a little dream, for example.

If you prefer to hear the traditional von Trapp repertoire, here they are doing Edelweiss.

And teaching you how to make chicken schnitzel.

The music in the background, (“Blow, mother-in-law, blow!”)  sounds like it might be an old Austrian folk song, but it’s actually a song of the 30s made famous by the Comedian Harmonists, called Die Dorfmusik.   (“Village Music”).  German lyrics here, if you want them.  English lyrics apparently under copyright - can’t imagine how anyone would want to do this since it’s all about Jochen waltzing Kati around the dance floor and taking her home and then telling somebody's mother-in-law to blow her horn.  You’re not missing anything.  Hokey in the extreme.

And a little digression from the digression here:  The Comedian Harmonists, which I blogged about some time ago here – if you don’t know them – were an extraordinary talented German group that got disbanded under Hitler because some of its members were Jews.  They tried to make it again in America, but there was no appeal for German singers postwar.  The von Trapps acknowledged their debt to them during the concert.

To get back to Pink Martini, check out the background story of how the von Trapp kids and Pink Martini came together here.

What makes this group so appealing - at least to me - is the sense that they are really enjoying themselves. Click on their “Get Happy” preview link, for example.  And the way they get silly but keep up the musical standards, as in the Japanese kids song Black Cat Tango.

Another aside here:  This song was apparently originally an Italian song about a kid who gets a white cat but wishes he had a black cat instead.  See Volevo Un Gatto Nero.   It was sung by a little girl named Vincenza Pastorelli in 1969.  Vincenza didn’t make out all that well - she was arrested for prostitution in 2007.  The song had a better run, catching on internationally and especially in Japan, where cuteness has a great draw.  It was originally sung by a little six-year-old boy named Osamu Minagawa who was told he was singing about a cat named Tango.  Actually, the words to adults signify the composer’s flighty girlfriend.  It was then picked up by every stage mother in Japan and sung by maybe a million kids without an ounce of talent, making it a candidate for the song you are most likely to be forced to listen to in hell.   It is available in lots of other countries, as well - here’s an example in Hebrew, sung by Tzipi Shavet, where it is called “Let’s all go to the Jumbo."  It has been translated into several other languages, as well.  For some reason, when picked up by the Pink Martini and the four von Trapp kids, it becomes almost bearable again.  At least to my admittedly biased ears.  Sung by Timothy Hashimoto, the third vocalist.

A better place to end on might be the pure voices of the kids in Storm, written by 19-year-old August von Trapp.  (Go back to http://pinkmartini.com/video/  and click on Storm.)

Or on China Forbes’s Ich Dich Liebe, sung for some reason in a totally bizarre “foreigner-German”.  But this one is worth your time if only to watch Thomas Lauderdale at the piano keyboard.

Can’t wait till next year when we can do it again.

The photo of Pink Martini and the von Trapps is from a review in Billboard which has links to songs on the latest album.  The photo is credited to Chris Hornbecker.    I assume it's a publicity photo.  If I learn I have overstepped copyright boundaries, I will of course remove it immediately.