Come on in, your money's good 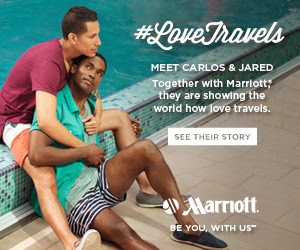 Some years ago, back in the 70s, I went to Great America in Santa Clara (California) on a weekend night when it was reserved for gay people. It was built by the Marriott family business and I remember wondering how this former president of the Mormon Church managed to justify to himself sponsoring such a thing as a gays only day when gays could come in and roam around and even hug and smooch without getting dirty looks. I decided my memory must be faulty. It must have been after Marriott sold Great America off to the city of Santa Clara who, I think, sold it to somebody else. But then I come across this picture of two handsome men with legs for days in a Marriott hotel ad urging gay folk to join Carlos and Jared, come to Marriott, slip between their sheets and swim in their pools. So yes, Marriott, turns out, is both a leader in the Mormon church and gay-friendly.

Should I be surprised to learn that Mr. M can preach homophobia from the pulpit on Sunday but assure himself a healthy cash flow the rest of the week? Or is it that Mr. M's sons who now run the company have decided with the majority of Americans it's time to shelve the scripture-based demonization of gay people? I can't be sure. It's hard to keep up with the changing scene and it's always useful to recognize how easy it is to let your assumptions run away with you.

The holdouts, of course, are still fighting marriage rights state by state even as one court after another throws out bans on same-sex marriage as unconstitutional. They don’t get thrown out, actually. The repeals get put on hold so that these folks get even more time to make the case that allowing gay men and women to tie the knot with each other signals the end of civilization. (Why, I’d like to know, are we bending over backwards to allow these folks even more time to prove the sky is falling? Why don’t we just say to them, “Look! Marriage between members of the same-sex has been going on for years now in a whole bunch of places. Go get me some evidence that civilization has screeched to a halt in Iceland. Or Argentina. Or Holland or Spain. Or Massachusetts or New York, for that matter. There is no damn argument! What do you people want?)

More than twenty federal and state courts have now ruled against the bans. That’s an unprecedented run of victories for same-sex couples. Because the decisions have gone 20-0 in favor of same-sex marriage, many are now claiming the writing is on the wall - it’s all but over. But there is still the Supremes. If the latest decision - the one by the 6th District Court in Cincinnati - keeps the ball rolling and makes it 21 to 0, the Supreme Court can sit on its hands and claim the issue is working itself out. But if the 6th Court goes the other way, and stops the run of victories by disagreeing with the vast majority of their judicial peers and declaring this is not a constitutional issue, but a decision to be made by a majority of voters, the Supreme Court will have to step in sooner to resolve the difference of opinion.

There are three judges making the decision in Cincinnati: two George W. Bush appointees and one Bill Clinton appointee. One of the Bush people is assumed to be anti-same-sex-marriage and the Clinton person is assumed to be pro-same-sex-marriage. That leaves the other Bush person a swing voter, and he was heard to ask, “I’d have thought the best way to get respect and dignity is through the democratic process.” Which is the view that this is not a constitutional issue, but one where the majority should rule. Whether he would have opposed women’s rights or civil rights for blacks back in the day, he does not sound persuaded by the argument that justice delayed is justice denied.

Fine. Let the 20 to 0 go to 20 to 1, and let the Supremes do their thing. They are highly unlikely to oppose same-sex marriages already performed. My guess is the most damage they might do is force gay men and women to continue to have to travel out of state to marry. To treat them as second-class citizens, in other words.

Think about that. Could they really do that?

The courts are not the only place, of course, where gay rights are working themselves out in America. There is also the marketplace. Which raises an interesting question. While we're celebrating the fact Marriott hotels are increasingly gay-friendly, what are we to make of the fact that they are likely to turn those gay dollars over to Republicans? Mitt Romney's first name is Willard. He's named after J. Willard Marriott, who, together with his brother Richard, gave 1.5 million dollars to Restore Our Future in the last election, Romney's SuperPAC.

If you don't want to stay at Marriott, at least you can go out and buy Coke. Five teaspoons of sugar in a can. Removes your toilet stains. You know. The vanguard of American economic imperialism. That Coke. One of the writers at The Advocate has an article today on several companies, including Coca Cola, now supporting gay rights, and asking us to remember who our friends are.

A mark, a yen, a buck or a pound. Money makes the world go around.