Banging Pots and Pans – or not 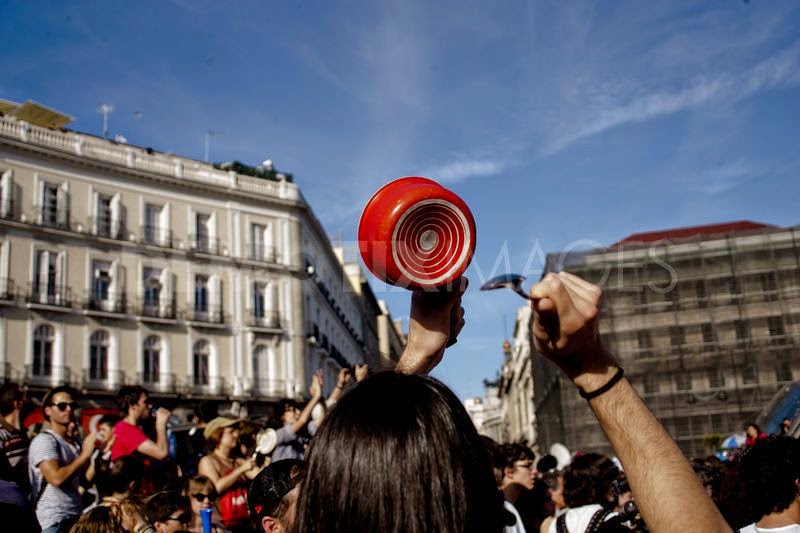 I’ve been having a conversation with myself for some time now about how discouraged I feel about what’s going on in the world.  My country has fallen to pieces and is held sway by a corrupt self-serving oligarchy.   A Pew Research Center report suggests support for same-sex marriage may be leveling off.  (But that has to be measured against another Pew Research report from last March showing support for same sex marriage among Republican young people is up now to 61%.) We’re at the point of no return on climate change and may not have the power to keep ourselves from the abyss.   Our policy of capital punishment has killed hundreds of falsely accused.   Poor black Americans are losing their voting rights after fifty years of struggle.  Americans appear to get dumber by the minute on any number of scales.  The tin hat wackos are claiming that Iraq War III is proof we’re in the apocalyptic age, and who am I to say they’re wrong?

And what are you going to do about all this, I ask myself.  One voice in my head says get out in the streets, go door to door, empty your bank account into some good cause.  Another says, it’s much bigger than you are, go tend your own garden, listen to music, and use that money for fine wine instead.  Still another says, go on as before.  You’ve found your rhythm.  Keep it up.

I want to share some of these thoughts in my head.

I came across this quotation the other day:

There is also work to be done in study. Every revolutionary movement needs people who think and study and write and analyze. A revolution is not sustainable if there are only people on the street.

Just the words people like me are looking for who bang out on keyboards our anger and resentment and outrage and dismay over the slow pace of recognition of the rights of women, of racial minorities, of immigrants fleeing poverty, and other folk at the mercy of powerful people with reasons to discriminate against them.  My focus has long been mostly on the rights of LGBT people, and their abuse, particularly by people who use religious scriptures and religious tradition to justify foot-dragging in the granting of universal human rights.

The quotation comes from Bill Lindsey’s blog.  A black theologian expressed his frustration to theologian Walter Brueggeman over the fact that racism is alive and well in America and had reared its head recently in Ferguson, Missouri. The quote is part of Brueggeman’s response.

These words speak to me because I have a little voice in my head that drives me nuts.  “You’re beating a dead horse,” it says.  The battle is already won, it says.  You’ve had your say, now move on to something else, it says.  I look at the categories I’ve created on the Hepzibah blog and see I’ve written 192 articles under the rubric of gay liberation, way more than the next category of miscellaneous commentaries.  And I have to admit that while they each deal with different particulars, there is an awful lot of repetition.  It’s clearly time to leave it to others who might have something more original to say.

Unlike many other bloggers, I make no effort to reach out to the world at large.  And that means I am largely preaching to the choir.  Some of them pass what I have to say on to others and I am always pleased to hear from strangers who agree or disagree with my conclusions.  The positive comments make me feel good, of course, and the negative ones are welcome too if they suggest a genuine interest in dialogue.  “You’re a left-wing asshole,” comments, not so much.

Bill Lindsey’s blog, Bilgrimage, is addressed to a Catholic audience.  He chronicles the slow painful progress (and sometimes the steps back, as well) in the Catholic church to bring the church closer to the message of the Gospels and away from the men in silks and satins who steeple their fingers, roll their eyes toward heaven, and assure us we do well to believe they speak for the Almighty Father in Heaven.  He too is often discouraged by fears he is beating-a-dead-horse and speaking only to the choir, but in his case, at least, it is clear he is speaking far beyond the choir, not only to Catholics, but ex-Catholics, never-been-Catholics, and any number of folk who recognize his efforts to keep the fire going under the pot.  He is a model for those who live lives of contemplation rather than street protesting, and he appears to have a very wide following.  I read him regularly because I find him, despite his support for religion, a kindred spirit.  I find his efforts enormously encouraging, even when they are not my fight.  Apathy is perhaps the bitterest form of defeat, and as with depression, I get the feeling the entire human race is served when people get up and go, even if it is only to sound off on the smallest injustice.  I have friends who wish I'd get off the gay liberation bandwagon (and I imagine Bill does as well) and on to what they consider more pressing issues.  But, as one of my heroes, Alice Walker, once said to her critics, "You tell your story and I'll tell mine."

There is so much one can do.   In my younger days, I marched in anti-Vietnam war protests in San Francisco.  Thousands of people streamed down Market Street year after year to Kezar Stadium.  It took years, but in the end those protests helped stop the war.  On another front, I spent some time in Buenos Aires and am familiar with the Mothers who marched before the presidential palace demanding an accounting of their missing children during the dictatorship abuses of the 70s.  And with other ordinary homemakers who left their kitchens to bang pots and pans in the streets.  Given our impotent Congress, I wonder constantly why we are not doing the same in the United States, banging pots and pans at the Obama Administration for failing to prosecute the Wall Street Bankers, for example.

We don’t have that fire in the belly anymore.  Not like in the 60s.  And I do feel guilty and ashamed at times that the best I can do is bang out another rant on a blog, or on an e-mail I send to a limited number of friends, or create a Facebook entry showing I support immigration reform or object to fracking or call attention to climate change and the harm being done by corporations like Monsanto.

The question is why do it?  Why keep it up?  Why not organize your neighbors into voting blocks to get better representation in Congress?  Ralph Nader is still banging on that that’s the best way to go.  I heard him speak a few weeks ago here in Berkeley.  But (beside the fact my feet hurt and I need longer and longer naps these days) I’ve lost faith in Congress and in American democracy generally.  I don’t think getting rid of Barbara Lee or Barbara Boxer will make things better, since they (who are my people in Congress) are already among the best – Barbara Lee, you may remember, was the sole voice in Congress protesting W’s invasion of Iraq.  I think the problem is much larger than a democracy now on the skids – although I am delighted many disagree with me and are still fighting to change it.  I think the answer has always been consciousness raising.

For years I taught communication skills in Japan.  A friend once quipped that if General Motors and Ford and Chrysler were going bankrupt, I should take the blame.  I was off in Japan teaching their kids to become more critical thinkers and ultimately be more persuasive debaters and negotiators.  I didn’t see it that way.  I don’t see any difference between young people, regardless of where they live.  They are the hope for change.  Get them to think, get them to read and write more effectively, and you are contributing to positive change, I always told myself.

I am now retired, and the question of how effective I was is training good communicators is moot.   Few of my students, to the best of my knowledge, have gone on to fight Monsanto, or Roman Catholic notions that women ought to be subservient to men and gay people ought to be celibate.  I don’t know, frankly, what most of them are doing.  I doubt I had much of an impact.  I don’t think that is false modesty.  I think it’s a realistic assessment

I do have one story I am proud to recall.  A Saudi student once said to me in class, “I don’t waste my time talking to people I disagree with. They have their own way of thinking and we have ours.  We should leave them alone.”  I responded, without much thought, “But what good does it do you to talk only to people who agree with you?  All that does for you is confirm what you believe.  How are you ever to hear something new, how are you going to correct your mistakes if you don’t remain open to different views?”  I ran into him twenty years later and he told me that was an important learning moment for him.  In moments when I get harshly self-critical, and beat myself up for not doing more than I do, I remember moments like that and take heart.

My point in all this is to say that I believe, if we are to be realistic about our ability to make the world a better place, we need to hope big but expect small and not be discouraged.  I think we can never know what impact we have on the world, and have to act as if we are making a difference even when everything shouts out at us that we are not.

Horrible things happen all around us all the time.  Here in my neighborhood, a young man decided this week he wanted to steal a car and attacked a 72-year old woman and slit her throat in the process.  He’s the kind of kid one wants to lock up and throw the key away.  I have to wonder if a few more voices speaking in his ear out about kindness and non-violence might have made a difference with this kid before he became the person he is today.   And I just watched a program on German television about the several hundred German kids who have gone off to join ISIS in Syria, kids looking for power and identity.  No doubt they heard thousands of good people urging them to do good things over the years, to no avail.  But maybe just one more voice, with a message spoken at just the right time when they might have taken it in, might have turned them around.

I’m urging this on faith, and faith is not my strong suit.  But I’ve seen close elections and I know that sometimes a single vote matters.  And that helps convince me that sometimes just putting out a declarative statement about how things are going wrong and how they might be put right might make a difference as well.

God bless the beaters of (apparently, but not necessarily) dead horses, I say.  And those who preach to the choir.  And those who go on and on till you want to pull their plug and make them go away.

We, most of us, don’t make waves.  We are just drops in the ocean.  We don’t run marathons.  We move by inches.  The opposite of good isn’t always evil.  Most of the time, it’s apathy.

We live in the drops and in the inches.  And that’s where we ought to try to make a difference.