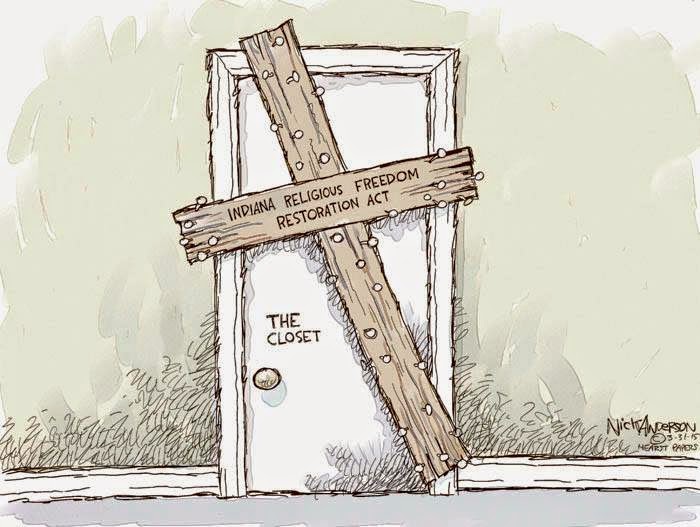 Let’s hear it for The Atlantic.  They’ve got coverage of the Indiana Religious Freedom Restoration Law from differing perspectives being debated on two successive days:  Garrett Epps argues (March 30) that the RFRA (the a in “act” is now the l in “law”) was imposed specifically to allow Christians to discriminate against gays and lesbians.  And Conor Friedersdorf insists (April 1) that all the fuss over the RFRA is misdirected and even hypocritical.  One needs to read both these articles.

First, the good news.  Both arguments are “pro-gay,” please note.  Epps lays out the details of the case and the chronology and does a real service to those trying to understand the attempt by religious conservatives to pull an end-run around America’s raised consciousness regarding gay people.  The RFRA is a pitiful example of a last ditch stand by folk seeking to maintain at least a small corner of the world where they might maintain their prejudices.

Conor Friedersdorf is not making a counter-argument.  I don’t think one can be made, actually.  Not by anyone serious.  But this young man from Orange County who favored the libertarian candidate over Barack Obama in the 2012 election, sure knows how to serve the conservative cause by going after liberals he considers too smug and huffy.  It’s not a complex formula.  First, you take potshots at politicians who ride with fingers in the wind, “evolving” in a way that will give them the most votes at any given moment.  Never mind the fact that having hypocrites and opportunists on your side doesn’t mean your cause is unjust.  Secondly, you take the low road when you can’t win an argument and argue that you shouldn’t be making the argument in the first place – that there is another, bigger, argument you should be making instead.  Friedersdorf’s main point is that the bad guys (he’s on the side of the gays, remember) are the states where gays still cannot marry.  Indiana is not one of those states.  Ergo, it’s the wrong target.

Friedersdorf misses the woods for the trees.  When you have two battles to fight it doesn’t mean the only way to go is to fight one and drop the other.  You fight them both.  Actually, the battle for marriage rights in all fifty states is on hold at the moment because the Supreme Court will take up the issue later this month, so frankly I don’t know what Friedersdorf is going on about here.  Gay rights advocates can and should now devote their energies elsewhere.  Like speaking out against efforts to expand the definition of businesses and corporations as people who have religious rights, particularly when “religion” turns out to be just another word for “discrimination.”
You don’t have to be gay to spot homophobia this blatant.  It's patently obvious the context for the law is the same-sex marriage fight.  And if you doubt that, and are tempted to believe Mike Pence is being honest when he says there is no intention to discriminate against gays, just take a look at the people standing around Pence as he signs the bill into law.  And note what same-sex marriage opponent Micah Clark, executive director of the American Family Association of Indiana, had to say on the subject: "If there is no way to protect marriage as the union of a man and a woman, then we must protect the freedom of conscience, thought and speech on marriage in Indiana."  Besides Micah Clark in the picture on the right are Curt Smith, who has equated homosexuality with bestiality.  And Eric Miller, who once spread the false notion that preachers who preached against homosexuality could be jailed.

The knife in the back gets twisted when you realize that in places like Indianapolis, which have stepped up to pass protections for gay people,  this law would require them to back down and create exceptions for religious people (any non-specified people of any religion, if you can imagine anything this wild) not to comply with these protections.

And you have to laugh so you don't cry at the ways language is manipulated these days.  We invade a country and call it “Operation Freedom.”  We have the “Patriot Act” designed to mark political opponents as traitors, laws like the “Defense of Marriage Act,” and organizations like the “National Organization for Marriage,” which are mechanisms for keeping people out of the institution of marriage.  And now the good Christians of America are being told Indiana is leading the fight to “restore religion” in their land – code for “whatever you do, don’t let gays get away with thinking they are as good as we are.”

And what the hell is this "restore religion" about in the first place?  When did we turn into a theocracy, where it's the job of state legislators to "restore religion?"   And scaring Aunt Martha into thinking she's about to be trampled by drag queens hauling poor Father John to the altar to marry them is a pretty sneaky means to an end.  It's not the state stepping on church rights here; it's the other way around.  But by the same token, if you want to hang out your shingle outside the church grounds and sell indulgences, you will have to sell them to Methodists – and not just to your own kind.

One last thing.  Sometimes when you take a stand, you end up taking it on what appear to be all the wrong grounds.  When Muslims die rioting because their Prophet had been insulted by cartoonists in Denmark or France, there is pressure to blame the cartoonists for putting a red flag in front of a bull.  Stop looking for trouble, critics say, missing the point that you don’t fight for free speech only when you’re fighting Hitler or Stalin.  You often fail to appreciate the principle clearly unless you’re fighting at the outer edges.  In the case of censorship, that means fighting for the right of disagreeable people to be disagreeable.

I would never want to have somebody bake me a wedding cake who didn’t like me or approve of my wedding.  If I had the least suspicion I was talking to a baker who might spit in my cake, I'd be out of his bake shop like the roadrunner.  You don’t fight back because you want some person to bake you a cake.  You fight back because you don’t want people who operate businesses to be able to use religion to justify lynching.  Which, if I’ve read this law correctly, it sort of suggests they should be free to do.  OK, so there are other laws to prevent lynching and I’ve just given you justification for calling gays hysterical queens.  But a law that allows anybody to use religion to escape civic responsibilities is still a rotten piece of legislation.

And now for the really good news.  Indiana and its governor are now in full damage control.  And Arkansas, which was once set to follow Indiana into the anti-gay folly, has backtracked.  Governor Asa Hutchinson has announced from Little Rock that his son has persuaded him not to sign the Arkansas version.  Something to do with difference in attitudes between the generations.

The battle isn't over.   (Is it ever?)  As the San Francisco Chronicle commented this morning (April 2nd) in its lead editorial, undoing the damage of this law will take time.  Although Hutchinson will not sign the bill into law, if I have my information correct, unless the bill is expressly vetoed it passes automatically into law.  A veto would be nice.

Still, as the Chronicle notes, "At long last, disingenuous defense against discrimination is in retreat."

photo credits: the cartoon of the cross nailed to the closet door is by Nick Anderson of the Houston Chronicle.  I got it from Anderson's Facebook page after seeing it this morning in the San Francisco Chronicle.
Source for the photo of Pence, surrounded by religious supporters at the signing of the RFRA, is here.