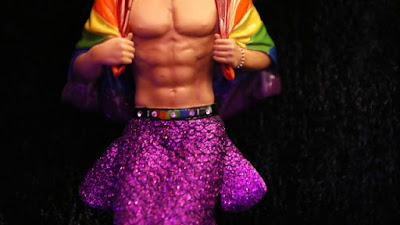 Just as the French use the word bourgeois to sneer at somebody who has all the boring characteristics of the conformist middle class, Germans have this wonderful word spießig, which means roughly the same thing.  Boring, mostly.  Unimaginative.  Conventional and dull.  The noun form, Spießigkeit, carries the range of connotations from smugness to narrowmindedness.

In today’s Süddeutsche Zeitung, Munich’s daily, there is an article titled, “Irritiert über so viel schwule Spießigkeit” – “Annoyed by so much gay Spießigkeit.”

Gays have arrived.  And with their “success” at becoming accepted the greatest fear of the avant-garde gay liberationist would seem to have come true as well.  “We” have defeated “them” by becoming them.  Infiltrated the lines.  Pre-empted the criticism of being different.

Gay locales seem to be going out of business right and left.  No longer needed, they say.  You’ve got your job now, your life partner and your civil partnership, your dog, your fancy apartment in the right neighborhood.  And access to all the good places to go in the city.  Why restrict yourself to the gay-only places?

But that’s not the whole story.  While once the issues were things like working to change the definition of manliness – real men cry, real men like beautiful things – today it seems more and more gays are being redefined as people who have always been spießig.  Always had their little private lives of domestic tranquility.  Maybe, the writer of this article suggests, what’s going on has nothing to do with the gay world at all.  Maybe it’s just Germans who are spießig.  Or is it that all Europeans are inclined toward Spießigkeit, and only the Germans worry about it?

See?  You can write an article about gays now and say absolutely nothing much of interest at all except that maybe there’s nothing much to say.

How’s that for having arrived?

Except that this is profoundly insular thinking.  Marveling over how we've "arrived" is understandable for people who have lived through some astonishing changes and whittling away of homophobia in the mainstream.  I've guilty of this triumphalism myself.

But if the "A-Gays," as the spießig gays of San Francisco and other American cities are described (this Munich phenomenon is not news here) are now actually making straight men stop and wonder if maybe they are missing out, there are still plenty of spaces where gays and lesbians live in fear and discomfort.  Just as the rising economic tide has been great for the 1% while 48 million Americans still live in poverty the rise of the A-gays and gay acceptance has not meant success for everybody. And I'm not just talking about Russia and Uganda and those unspeakable places where gays are pushed off roofs to their deaths.  I'm talking about the useless clowns running for president on the GOP ticket - homophobes to the last man plus Carly the Liar Lady.  We still have not cleared the air yet about Ted Cruz, Mike Huckabee and Bobby Jindal all appearing with an evangelist urging death to gays and lesbians.

This is a challenging task.  You don't want to be a Debbie Downer (to use an old pre-gay arrival term in a language we used to call faggotese).  You do want to celebrate the victories and both the successes and the rapidity of the changes for the better.

But let's not get all hung up on how "we're all gay now" and "oh, dear, what mountains are left to climb?"

photo: The photo above accompanied today's Süddeutsche Zeigung article in question.  Whether it was irony or cluelessness that it was chosen to comment on the gay mainstreaming point of the article, I can't say.  It's actually a Christmas tree ornament.