Blame it all on the Saudis…well sort of 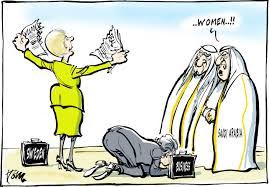 I read in the paper yesterday that women had voted in Saudi Arabia for the first time.  And been elected to some local councils.  That’s the good news.  The bad news is the they had to depend on men to drive them to the polls.

Rome wasn’t built in a day, you might say.  And actually, as I see it, the right to vote is a much greater leap forward than the right to drive. The right to drive is often defended by men as a way of "protecting" women, believe it or not.  There is no such defense possible for taping their mouths shut, politically. In any case, the practice is right up there with female genital mutilation, bride burning and forced marriage as an example of the need for women's liberation on a world wide basis.  It's hard to believe, don't you think, that even in this day and age there are women kept virtual prisoners in their own homes, subject to all manner of abuse by the men in their lives?  “Prisoners” may not be the right word.  Maybe "slave" is the word.

OK, let's look at the argument for limiting a woman’s right to drive. Imagine being stuck by the side of the road and having to change a tire while covered head to toe in a black bag, and you’ll see the point.  Or getting into a fender-bender with a bunch of thuggish teenagers. This should take you immediately to the larger issue, which is the question of equality of rights, protections and responsibilities of men and women tout court.

So now women are in government.  Bravo.  And one of the first issues the women came up with, I understand, was the need for better garbage pick-up.

My first reaction on reading that was, “They’re asking for more goats?”

Which reveals my prejudices about life in that bizarre country called Saudi Arabia where I spent a year (1977-78) working as an English teacher with the UNDP (the United Nations Development Program.)  When it was over I felt I’d escaped from a nightmare and have shown only passing interest in keeping up with developments in that neck of the woods (that's sarcasm, in case you missed it.)  I understand progress has been notable and it’s not the same place today that it was when the goats ate my fanbelt when I made the mistake of leaving the hood of my car open one day to run upstairs for some tools.  In Jeddah, in 1977, people tossed their garbage all over the place and the goats took care of it.  And flat tires were very common, given the nails and broken glass that made its way onto the roads.

It’s not a place I would go back to, much less live in again.  But there were good moments.  Some of the warmest, kindest people I’ve ever met in my life were ordinary Saudis.  It’s no secret that when life gets harsh it does many people in.  But it can also bring out the best in people and Saudi Arabia taught me that one should never sell the human race short.  People can rise to all manner of challenges.  I just want to make that point explicit, even though that should not be necessary.  On a personal level, I find Saudis no different in character from anybody else.  As individuals.

When it comes to the nation and culture of Saudi Arabia, however, I have another opinion.

On November 20, The New York Times ran an article by the Algerian writer, journalist and editor of a French daily, Kamel Daoud.  It was titled "Saudi Arabia, an ISIS That Has Made It" and it accomplished what many of us thought impossible.  It called Saudi Arabia out as the source of both funding and the ideology behind violent Islamicist terrorism.  I passed it on to friends with the comment, “Finally somebody is addressing the elephant in the room.”  Saudi Arabia, said Daoud, is essentially indistinguishable from ISIS (He prefers the word “Daesh” because it withholds recognition that ISIS is a state).  He calls ISIS “the black Daesh,” Saudi Arabia, “the white Daesh.”

The former slits throats, kills, stones, cuts off hands, destroys humanity’s common heritage and despises archaeology, women and non-Muslims. The latter is better dressed and neater but does the same things.

Emile Nakhleh, of the University of New Mexico, a member of the Council on Foreign Relations, has written about his failed attempts to get the Saudis to revise their school curriculum, the same curriculum ISIS has determined is suitable for the schools they establish in the lands they conquer.

If I had been paying better attention I would have seen that this is not the first time somebody has taken the Saudis on directly for the part they play in Middle East terrorism. A year and a half ago, Britain’s Independent ran an article saying essentially the same thing.  According to a former head of Britain’s MI6,

substantial and sustained funding from private donors in Saudi Arabia and Qatar, to which the authorities may have turned a blind eye, has played a central role in the Isis surge into Sunni areas of Iraq.

All those images of George W. Bush holding hands with the Saudi princes come to mind.  The flights to get the bin Laden family out of the country after 9/11.  Schmoozing for oil, we called it.  Business interests (read arms and plane manufacturers) are at stake.  Can’t fight big money.

You don’t have to dig too far beneath the surface, though, before you run into complexity.  The Saudi family came to power, remember, by making a pact with the Wahhabis.  The House of Saud would have Wahhab's backing in exchange for Saudi support of his radical fundamentalist Sunni understanding of Islam.  The Wahhabi (they’re generally called Salafi, the name they prefer, in Europe) are an uncompromising lot.  They accept no separation of mosque and state, no compromise with other religions, including Shia, Alawite, Sufi, or any other school of Islamic thought.  The current king of Saudi Arabia, Salman bin Abdulaziz, has declared “there is no such thing as Wah(h)abism.”  There is only Islam, and what the West likes to call Wahhabism is in fact Islam.  End of story.

Ali al-Nimr was sentenced to beheading and crucifixion for participating in a protest at age 17. Raif Badawi was to receive a thousand lashes — a punishment sure to kill — for his blog posts. A Sri Lankan maid, whose name has not been released, was sentenced, on scant evidence, to death by stoning for adultery. These are just some of the people awaiting horrific punishment in Saudi Arabia for things most of the world would not consider serious crimes, or crimes at all. It would be an outrage if their sentences were carried out.

Saudi Arabia’s justice system has gone into murderous overdrive. More than 150 people have been executed this year, the most since 1995. More than 50 people are reported to be scheduled for imminent execution on terrorist charges, though some are citizens whose only crime was protesting against the government. This wave of killing has prompted some to compare Saudi Arabia to the Islamic State: both follow Shariah law.

In discussing the refugee crisis in Europe, talk-show panelists frequently insist the problem needs to be dealt with at the source, and frequently they take on Germany’s alleged buddy-buddy relationship with Saudi Arabia as a major part of that source.  And Angela Merkel’s coalition partner and Vice-Chancellor, Sigmar Gabriel, head of the Social Democrats, recently came out as a strong proponent of this view.

But although clearly the ideology for ISIS is a Saudi product, blaming them for keeping ISIS going is not really justified.  Lots of private individuals in Saudi Arabia may well be supporting them, and the Saudis can be criticized for not cutting off those funds fast enough, but the Saudis are actually making moves to do just that.  This largely symbolic announcement yesterday that they were launching an Islamic Alliance as a Muslim response to ISIS (which, remember, kills way more Muslims than people of any other group) is a start, although they seem to have announced first and are only now gathering alliance members who might join in.  Not much.  But something.

The U.S. performed one the greatest international political blunders of all time by marching into Iraq as a means of satisfying American thirst for blood after 9/11 without regard to the warnings from all sides that it was likely to unleash chaos in the region.  The follow-up was an even more insane policy, if that’s possible, and that was to take part in Iraq's history of injustice and Shia-Sunni animosity on the Shia side, thereby throwing the ultimate victory to the Iranians, and driving the Sunni to the side of their tyrant friends in the Gulf States.  And the more radical ones into Al Qaeda and ISIS.

So now the choice in the Middle East continues to be between terrorists and tyrants.  Nice job, Bush administration.  And shame on you, Obama administration for not calling out your war-criminal Republican adversaries for what they are, making yourselves into partners in this mess.
We can go on and on about what an awful place Saudi Arabia is, how backward in terms of human rights, how rigid in terms of religious ideology.  But the larger picture, alas, is of us over here in the Western Hemisphere, looking on as the refugee crisis rips Europe apart and throwing stones at Saudi Arabia from our house made of glass.