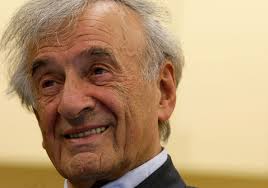 Elie Wiesel died at his home in New York yesterday.  He had survived Auschwitz and Buchenwald and spent his life making sure the memory of the Holocaust remained alive, as well as speaking out for others in places like South Africa, Nicaragua and the Sudan.  He is being remembered by people around the world in the most laudatory language imaginable.   Obama called him the “conscience of the world.”  I think with good reason.

You know it’s your conscience speaking when you get the feeling you know what’s right and you’re feeling uncomfortable at the same time.  I followed Elie Wiesel over the years.  Not all that closely, but when he spoke, I listened.  Only once, when he spoke out in favor of extending Jewish settlements in Jerusalem, did I disagree with him.  On every other occasion, I was persuaded he was on the right side of history.  He was a remarkable man.  Driven.  A dog with a bone.

It was the Bitburg controversy where his voice touched me most directly.  I had a good friend in Berlin named Achim.  He and his wife Margit had experienced the war directly.  Achim had been in the German navy and Margit survived the Russian invasion of Berlin in 1945.  When they spoke about war, I always listened.  After the war, Margit and Achim became involved in an organization that managed the graves of fallen soldiers.  Every year, a calendar would arrive in the mail and I would hang it up.  Always a bit self-consciously – as an American, I wasn't going to honor the German war dead without thinking twice.  But I came to understand – and the older I get the more I understand – how good people can get swept up in evil, and I came to see that young men who marched under the symbol of the swastika could be victims too, and came to admire the work of this organization known as the German War Graves Commission, first founded after World War I, but expanded after World War II.

Achim was a delightful friend.  I learned much from him about German politics and political activism generally.  He became Berlin’s representative for the United Nations at some point and when he died condolences came in from all directions. I admired him as a teacher and as a voice of reason. In all the years we knew each other, I remember only one big disagreement.  That was the visit of Ronald Reagan as president of the United States to the war graves at Bitburg.  Achim, along with 87% of the German people, found it appropriate that Reagan should support his friend and ally, Chancellor Helmut Kohl, and make a “visit of reconciliation” to Bitburg during his state visit to Germany in 1985.  Elie Wiesel convinced me otherwise.  It was a sad parting of the ways for Achim and me.  Fortunately not a lasting one, but it was painful at the time.

Reagan wanted to station Pershing missiles in Germany against strong German opposition.  Kohl came to his aid, and Reagan wanted to repay the favor.  Unfortunately the administrations of both national leaders failed to do their homework.  Among the dead at Bitburg were 49 members of the Waffen-SS.  And to really muddy the waters, Reagan press secretary Larry Speakes mistakenly told the press that there were Americans buried at Bitburg.  Turns out there were not.

I struggled over this strong difference between Achim's perspective and mine.  On the one hand, I was in total agreement that war victims didn’t stop being victims simply because they were German.  On the other hand, I heard Wiesel’s voice when he lectured Reagan, saying, “That place, Mr. President, is not your place.”

Wiesel, according to all reports, suffered mightily over this decision to speak out again the Bitburg visit.  He was grateful to the United States for taking him in after the war, and when Reagan called Wiesel to the White House to award him the Congressional Gold Medal of Achievement, it felt all wrong to bite the hand that was feeding him, so to speak.  But he did.  White House staff, knowing they had messed up, tried to limit Wiesel to three minutes.  But Wiesel insisted he would get his full time or he would boycott the event. In the end he got to speak his mind.  You are wrong, Mr. President.  You are wrong.

That event is chronicled by Gil Troy writing in The Daily Beast this morning.  Troy describes Elie Wiesel as a “one-man scourge of dictators and a friend to the oppressed.”

Countless thousands will remember Elie Wiesel for speaking truth to power.  Besides Reagan, he also scolded Pope Benedict for reinstating holocaust denier Bishop Richard Williamson.  Williamson’s “I believe there were no gas chambers” got him excommunicated, but Benedict brought him back without bothering to check whether his views had changed.  It was some time after being reinstated that Williamson made the "no gas chambers" remark.

I remember reading about that and feeling sick to my stomach.  Then I read that Elie Wiesel had called Benedict out on his effort to let bygones be bygones, and I felt better.  There was somebody out there watching and remembering.  As long as somebody's paying attention we would be all right.

That will be Elie Wiesel’s legacy.  I will remember him for the many hours of discussion I had, both with friends and in my head, over how to find the line between reconciliation and remembering, one of the greatest moral dilemmas one is ever faced with.

There is no greater service, I think, than to get others out of complacency and forgetting, to churn the waters now and again, to make you think.  And revisit old certainties.  And think some more.

One of my heroes has died, and I am very sad.