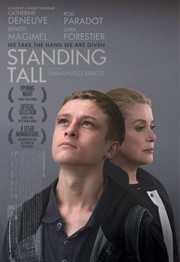 Standing Tall  (Tête en Haut) is an exceptionally good movie.  Whether you zero in on the social commentary, the story line, the drama, the insight into a world outside the daily routine, there’s much to bounce off of.  In my view, it is worth watching if only to see Catherine Deneuve still elegant, still going strong at 73.  She plays a judge in juvenile court who refuses to give up on what most of the world would see as a throw-away kid.  Or at least a “lock up and throw away the key” kid.  Also worth watching the film for are two more actors – newcomer Rod Paradot, who plays Malony Ferrandot, the kid in question, (from 7 to 17) who has virtually no impluse control and precious little empathy.  And seasoned actor Benoît Magimel, who plays Yann, the social worker assigned to Malony’s case.

Another reason to take in the film is to see how a juvenile system can work if the right people are running it.  And to watch the way in the French legal system a judge interrogates and engages instead of just sitting back and watching two opponents slug it out, trusting truth will out in combat.  These heroes of the French welfare system suffer from some of the same problems we have.  How hard it is, specifically, to get the world to give kids born into dysfunctional families a second chance when they have missed a chance at education to spend their entire youth fighting their own dysfunctional families and can’t be trusted not to slug you at the slightest pretext.

Filmmaker Emmanuelle Bercot chose to focus on a success story.  She might have selected a kid who falls through the cracks and simply banged the drum of social criticism.  Instead, she gives us a look into a rickety social welfare system held together by heroic adults committed to the notion that one does not, in fact, throw any child away.  And weaves the kind of story you don't realize you're being drawn into until it's done.

In the wrong hands, this narrative could easily have gone off the tracks and become maudlin or preachy or overdone.  It is arguably overlong, if you aren’t used to European cinema, where one likes to linger on faces and long shots of people walking from here to there.  But if you allow yourself to sit back and let the story build, by the end you’ll be standing and cheering for the whole human race.

A marvelous antidote to the temptation to think that with modern-day Europe and the U.S. circling the wagons to keep “us” in and “them” out, we ought to grab our dogs and head for the mountaintop and hope the madness passes.  At least that’s my take on things.  I trust you’ll find your own reason to fall in love with Catherine Deneuve for the tenth time and celebrate the arrival of newcomer Rod Paradot.

Who has to be the cutest teenager in a tuxedo you’ve ever seen.  Watch him stumble all over himself searching for words to thank his supporters when he gets the 41st César Award (the French Oscars) earlier this year, 2016, for most promising male actor.