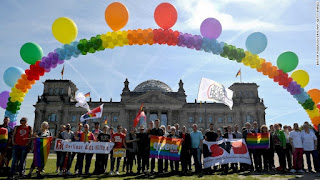 Ehe für alle!
Marriage for all!
Es ist vollbracht.  Biblical German for “it has come to pass…” or “it is accomplished.”
One needs lofty language for a day like this.
I’d like to say I don’t know why I’m so emotional about this, but that would be a lie. I’ve written many times now about my "history of things that never happened,“ and how I once was on the verge of emigrating to Germany when I got out of the army, got waylaid by Japan, and lived life on a different path. To this day, I feel an affinity for Germany, follow its public issues, and take a special interest in the rights of LGBT people in Germany.
I owe this to a German grandmother – won’t stop to tell the story here; I’ve repeated it many times elsewhere – who instilled in me a German sense of identity to the horror of to the Anglo-Saxons in the paternal side of my family. I’ve since put that "might have been" history out of mind for the most part. It only comes out on days like this, when Germany does something spectacularly well.
To the point. Same-sex marriage is now legal in

Argentina, Belgium, Brazil, Canada, Colombia, Denmark, Finland, France, Iceland, Ireland, Luxembourg, Mexico, the Netherlands, New Zealand, Norway, Portugal, South Africa, Spain, Sweden, the United Kingdom, the United States,  Uruguay…
and now in Germany, as well.
The Bundestag voted marriage rights for same-sex couples into law Friday morning by a vote of 393 to 226. A strong majority, in other words, with only four abstentions and seven no-shows.
Emotions were strong. Erika Steinbach completed her final day in the Bundestag after 27 years, by telling the assembly that God meant marriage to be between men and women only. Volker Beck also completed his final day in the Bundestag after fighting ferociously for gay rights his entire political life. He is recognized as the “father of same-sex partnerships” and continued undaunted, even after losing his life-partner to cancer in 2009.  When interviewed on the victory just after the vote, he couldn’t hold the tears back.
It is lost on nobody that this debate went on for some thirty sessions over the years. Unlike in many countries, where marriage rights were granted by courts or legislatures against slim majorities in the population, in Germany some 82% of the population has expressed support for same-sex couples. The positive side of this, of course, is that unlike in France and Mexico and elsewhere where there were large protests after same-sex marriage was legalized, this is not likely to happen in Germany, where the population has had more than enough time to get used to the idea.
It is not by accident that the chief opposition comes from the party in power, the party of Angela Merkel, and that party is derived from the church, and many in the party speak openly and regularly of their church affiliation and of the party’s values as “Christian values.” That includes Angela Merkel herself, the daughter of a Lutheran pastor. If there are any remaining doubts that organized religion is the last bastion of resistance to LGBT rights, those doubts can be put to rest here. 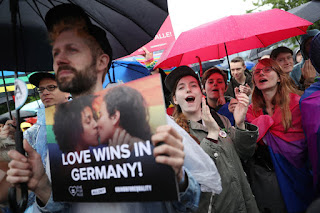 Merkel watchers gave, I think, too much credit to the chancellor for her part in this historic turn of events. I, too, wondered for a time whether she was voting her conscience or using the issue to her political advantage. In the end, we will never know – and, of course, it doesn’t really matter. Merkel went against the tide in her party, the CDU/CSU (Christian Democrats or, in Bavaria, the Christian Socialists are referred to together as the “Union”) by allowing in a million refugees. "On Christian grounds," she said, calling them out on their so-called Christian values. This seriously destabilized large segments of the society and turned many away from the CDU/CSU, and for a time it looked as if the Socialists had a real chance to unseat her in the upcoming elections. Only her incredible staying power has kept her afloat.

Now, once again, she surprised a lot of folk by stating that she had had dinner with the lesbian foster parents of eight children and become convinced there was no legitimate reason to see them as inadequate when it comes to raising children. So her opposition to gay adoption fell away – and that was the last remaining serious reason for withholding same-sex marriage from gay people.
So much for Chancellor Mutti (mommy), the warm-hearted Christian lady at the head of government. Angela pulled off a coup by releasing her party members from an obligation to vote in solidarity. They could vote their conscience, she told them. 225 Unionists voted no, 75 voted yes, in favor of same-sex marriage. Since the final vote was 393 yesses to 226 nos, it would not have made a difference, in the end. The vote would have carried anyway. But this way Merkel got to have her cake and eat it too. She personally votes no, thus tightening up her conservative credentials within the party, but allows the vote to go on, thus taking the wind out of the sails of her socialist opponents, and keeping the upper hand in the upcoming elections. Shrewd lady.
I watched the entire debate twice. It is available on YouTube here. Hope they can come up with English subtitles. Watching the Bundestag at work is a treat in itself. To folks used to the bloviating in the U.S. House and Senate, the members of the German Parliament look like they're running a town hall meeting. Watching it debate this issue is a treat with double chocolate icing. Aside from one moment of uninhibited hostility, most progressives spoke glowingly about how this decision should be self-evident, since Germany today was granting rights to a minority all the while taking absolutely nothing away from the majority. The folks on the right, speaking in opposition, could only make the usual claim that they were not homophobic (after all, they had granted partnership rights) and that everybody should respect each other regardless of where they stood on the issue. The one holdout to this view was Johannes Kahrs, a gay member of the socialist party. This issue should have been decided years ago, he said to Merkel, who was sitting within spitting distance, just behind him. “Thank you, Mrs. Merkel,” he said, “FOR NOTHING!”

After all is said and done, what matters is that another barrier to LGBT rights around the world has fallen, this time in the most populous country in Europe.