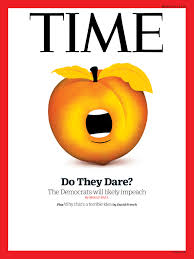 Interesting word, this word impeach.  Despite the fact that Stephen Colbert has been riding the impeachment process for all it’s worth for a couple months now with his series of skits on “Don and the Giant Impeach,” in which a large bouncing peach gets squashed, I assume that most people realize the connection between impeachment and peachy-keen is purely coincidental.  It is the word of the hour, and I must admit, I find both the fruit and the goings-on in the House delicious. I’ve been waiting, like most people I know, for that sucker to get taken down, and this is a dream come true. I know, I know, it’s but the beginning and the Senate is about to show its true colors as a cowardly bunch in thrall to the lowlife-in-chief. They’re pretty certain to let him off the hook, and demonstrate that the once proud party of Abraham Lincoln has now become the party of the cravenly rich, unabashedly tapping into native xenophobia to keep its paymasters in charge of things.

I know that Nancy Pelosi, bless her heart and her political savvy, wants us to think big and consider the impeachment of a president a black mark on our longterm democracy project. But I can’t help myself. I feel like singing and dancing to see this bozo have to carry the title, “Third Impeached President of the United States.”

Since my voice now cracks when I sing God Bless America, and my joints now limit my dancing to a couple kicks in the air and no more, I have to make do by playing with the concept and the sociolinguistic scope of the word impeach itself.

What interests me, linguistically, is the fact that the concept itself seems to be pretty much located in the world of Anglo-American democracies. You can tell that by the way impeach is a loanword in so many languages.

Antonyms include the word confirm.

There is a slight difference in British and American usage. In British English it is usually used to mean to charge someone with treason or another crime against the state, and in the U.S., it is used more generally to mean to charge the holder of a public office with misconduct, (i.e., not necessarily treason.)

The word traces its origin back to the Latin word for foot: pes/pedis, specifically to the metaphor of catching someone by the foot, impedicare. Like many Latinate words, it comes to us via the French evolution of the word: empêcher,  a term which went down another path to our word impede, as well.

It remains an Anglo-centric concept around the world, and if you type “Trump has been impeached” into Google Translate, at least 16 languages pop up using the English term, as opposed to a native term. I suspect I'd find even more if I had access to languages whose scripts I am unable to decipher.

When Brazil’s President Delma Rousseff was impeached, they used the English word, not the Portuguese term, in the slogan Impeachment Já (Impeachment Now).  Mongolian, Tajik, and all the Scandinavian languages have borrowed the word directly as have Dutch and Frisian, even though they might have used native equivalents for “indict” or “accuse” which they no doubt have in their vocabularies.  Which is what the French, ever en garde about ceding ground to the English language wherever they can, have done.  This is not a criticism - there is absolutely no reason why, if there’s a native equivalent, that it shouldn’t be used. I’m in sympathy with folk who resent the power the Anglo-American Empires have held over their realms, including their languages, and I find it noteworthy that they have not gone the way of the 16+ languages which have pressed the English language term into domestic service.

Some languages have created a native form in which the English peeks through: There’s Azerbaijani, for example: impichated. Filipio translates it: Si Trump ay na-impeach! Luxembourgish: Den Trump ass impeachéiert ginn!  Maltese: Trump kien impeached! Thai: ทรัมป์ถูก impeached! And my favorite in this special list has to be Uzbek: Trump impichated! Well, OK, second favorite. My favorite favorite has to be Yiddish: טראַמפּ איז ימפּיטשט! which turns out to be, if you can read the Hebrew letters: “Trump iz impitsht!”

So listen up, masters of dirty politics Lindsey Graham and Mitch McConnell, you who have declared that you will not keep your oath to follow the Constitution and carry out a fair trial following the impeachment process in the House of Representatives, as required by law. The eyes of the world are on you. You may win the battle, but you are not going to win the war.

One can only hope.

I watched the impeachment hearings all the way through. Was impressed as hell by some of the speeches - Steny Hoyer's, for example. And sobered by the willingness of the Republicans to follow the leader in their party-line argument that Trump may not be a nice guy, but he's not deserving of impeachment. I don't have a high opinion of politicians, so it doesn't surprise me that they are willing to do anything for power. That's the real goal of most of them, to exercise power in the favor of certain interests, and Democrats do this as readily as Republicans do, of course. But this struck me as a particularly craven display of partisanship. To admit that Trump is a nasty piece of work, somebody known to be “cruel, mean-spirited, and spiteful” and at the same time declare that since he has made us all rich, we should get behind him, no matter what.

Not America's finest moment, this, when half the governing body tells us money is the justification for excusing all of Trumps misdeeds. Never mind that what they're saying has no connection with reality. We're continuing to generate wealth for the country, but it's going into the hands of a limited bunch and all attempts to get to a more equitable distribution of that wealth are held up by this gang of thugs. No, never mind that. Just listen to the chutzpah of claiming that Trump's pressure on a foreign leader to scatter dirt on his chief democratic opponent in 2020 isn't impeachment-worthy.

You want to talk impeachment-worthy?  How about the time Trump stood in front of an audience, in front of television cameras, and flailed about, mimicking a handicapped reporter. Catholics for Trump tried to defend him by insisting this wasn't a case of him poking fun at handicapped people, that he does this for all sorts of people. Hilarious! And it tells you all you need to know, I think, about Catholics for Trump.

To the claim that the Republicans are making,“You're only using this excuse to impeach the man because you've always hated him,” the response should be, “We can quibble over whether hate, loathe or despise is the best word choice. It remains irrelevant. Did it never occur to you that I might have the goods on this petty fellow and loathe him, as well? One of those things does not cancel out the other. The guy got caught with his pants down, was tried in the House of Representatives and found guilty on two counts of impeachment. Doesn't matter what we think of his character; the man did the things he was found guilty of. And for that I think we should be glad. There's a joke going around on Facebook which runs, “Is it Happy Impeachment or Merry Impeachment - I don't want to offend anyone.” If you ask me, I'd suggest we use Joyous.


And I appreciate it, Nancy, that you have to keep your caucus in line and not let them forget impeachment is a solemn occasion, and not one for rejoicing. But that's a code of behavior appropriate to your world.

In my world, I'm for popping a few champagne corks.

And for my nerdy friends who like to play with language, here's the complete list of translations Big Brother Google is willing to provide. Since I don't have the capacity to assess the accuracy of all 100+ translations, I leave it to you to put right whatever errors you may find. We can start, for example, with this super-curiosity of using a translation from Livy, Book 2, to answer the question for Latin, which I know can't be right.