It's not exactly a six-degrees-of-separation story, maybe, but I think it's what you might call "close enough for government work."  I've just discovered I have a connection with Frankenstein's monster. 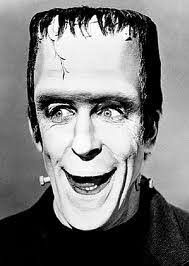 If you know me, you know I have a favorite cousin. Her name is Betty. She's my father's cousin, actually, my first cousin once removed, but why fuss? She has a special place in my history because she's the one who taught me to milk a cow, back sometime in the late 1940s.

Cousin Betty was born into the Johnston family, the Nova Scotia family of my father's mother. Because people had so many kids in those days, I have a ton of great aunts and uncles and it didn't take long before I was able, partially with the aid of ancestry.com, but even more with the aid of Cousin Betty and my own childhood recollection of personal connections with all the Johnstons, to create a family tree with leaves and branches looking like a wonderful old Great Oak.

Betty lost her mother quite young and that led to her being taken in by an aunt and uncle. Lots of kids in those days were raised by aunts and uncles, but that meant hers was the life of a farm hand, not that different from that of an indentured servant.  At some point she saw a chance to escape and took it. Climbed out the window and left the drudgery behind.

Betty found her true love and married into the Imlay family.  Now, all these years later, she has a prominent place on the family tree with grandchildren and great grandchildren galore, all going back nine generations to the first Johnston who was shipwrecked on Cape Breton, Nova Scotia, on his way from Scotland to Ontario to be with his brother. He never made it, and I can almost guarantee that if you go back several generations in Nova Scotia, you're probably a second, third or fourth cousin, twice or three or four times removed.

But let me get back to Frankenstein. I had never heard the name Imlay before. A Gaelic name, a variant of Imlach, found in the records of Aberdeen, Scotland, in 1402.  After watching a movie about Mary Shelley, the wife of the poet Percy Bysshe Shelley, to whom she lost her virginity in a cemetery, I looked her up and learned that she was the daughter of the early advocate of women's rights, Mary Wollstonecroft, who was involved for a time with an early American scoundrel named Gilbert Imlay, no doubt some fourth or fifth cousin.  Mary Shelley is the author of the early Gothic novel Frankenstein; or The Modern Prometheus, which she published in 1818.

So Betty is connected to Frankenstein, if only by marriage.

That, I propose, has to put me within six degrees, and I did it all without the aid of the Mormon family archives, so there.