Fundamentalism as the Source of Homophobia 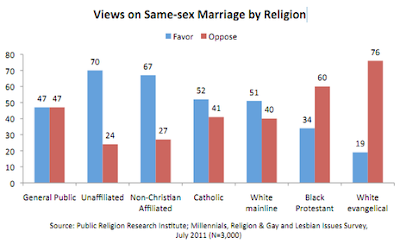 This graph is from the Atlantic Wire. We've been aware of this information for some time now - that disparagement and demonization of gay people comes overwhelmingly from religious sources. But now we have more precise figures. And we need to make some important distinctions. It's not "religion" that makes one homophobic. It's fundamentalism.

The majority of Catholics and the majority of "mainline Protestant" church people have no problem with gay marriage - by more than a ten percent margin. (And I believe a greater percentage yet of Jews have no problem with gays, although those figures are not shown here, and the divide is between the Jewish equivalent of “mainline” – Reform and Reconstructionist Jews on the one end, and fundamentalist, literalist Orthodox on the other.) Also missing from this chart is the fact that Roman Catholicism is divided into two camps, the traditionalist, authoritarian hierarchy-focused (Vatican I) Catholics who are the most homophobic, and those seeking to restore charity, not power, as the central focus (Vatican II). But even when the two are averaged, as they are here, it is clear which camp is in the majority.

Among Protestants, the real resistance to seeing gay people as normal, healthy people stems largely from a literalist, cherry-picked reading of scripture that ignores divorce, and says nothing about spousal abuse or adultery when discussing "traditional marriage," but zeros in exclusively on gay people.

How screwed up is that?

I need to point out that the tables deal only with same-sex marriage, and not attitudes toward gays in general. But gay marriage has always been the final step in gay acceptance. When you ask people about gay rights, most people now agree there should be no discrimination in the work place - that's one end of the spectrum, and gay marriage is the other. It's not precise, but it's fair to say if people believe gay people have the right to marry, they believe in all the "preceding" rights, as well. As the figures show, people unaffiliated with religion approve of those rights almost three to one.

One source, Wikipedia, gives these figures for 2001, a full decade ago:

• 76% of the general public think that there should be laws to protect gay and lesbian people from job discrimination,
• 74% from housing discrimination,
• 73% for inheritance rights,
• 73% favor sexual orientation being included in the hate crimes statues
• 70% support health and other employee benefits for domestic partners,
• 68% support social security benefits, and
• 56% support GL people openly serving in the military.
• 47% support civil unions,
• 46% support adoption rights.
• 39% support same-sex marriage.

The bottom line, that the percentage of "OK by me" voices in favor of the right of gays to marry has jumped from 39% to a neck-in-neck tie in ten years, well, I'd call that progress.

Just one thing, though.

I'm with those who argue a citizen's rights ought not to be up for grabs, so we should not get too hung up on social attitudes, as much as we want to celebrate movement in this direction. Ultimately, it's for the Supreme Court to determine whether there is a constitutional reason for limiting marriage to non-gays. This is not a debate over whether to build a new sewer system. And remember, in 1958, when Gallup first started polling attitudes toward interracial marriage, 94% of Americans were opposed. It took the courts to turn the tide, and when they did, people followed.

But I'll say it again. It's nice to know that slowly but surely attitudes are changing dramatically.