Future Shock and Some Free Associations

Ever get that feeling that the Buddhists are onto something and that we're all part of one great big single universe? The feeling that everything is somehow associated with everything else? That underlying every little thing is a single foundation and that sooner or later this six degrees of separation thing will kick in and we'll find the connection? I had that feeling for a while this morning as I was poring over the news and reading things at random. Things that were not supposed to be related somehow seemed connected.

Reminded me of what I had read the other day about how we were so wrong about the Neanderthals. We used to think they were a separate life form from human beings, but now we know we're carrying their DNA. All these years I thought Neanderthals died out before humans came on the scene, except in Oklahoma and parts of Texas, but now I learn that between 50,000 and 80,000 years ago grandpa Neanderthal was making whoopie with grandma Homo Sapiens, and between 1 and 4% of our genome came from grandpa. That may explain why in this country we have both people like Martin Luther King, who dreamt of a world where children are judged by the content of their character and not the color of their skin and people who want the government to keep their hands off their Medicare.

A lot of these curious associations I'm talking about are associated with some form of future shock experience. For example, this morning I found myself fascinated by a remarkably clear photo of Mars. Now how did they manage that, I wondered. Obviously, they’re getting good at this.

Then my eye goes to the credits. It’s a "Xinhua/Reuters Photo."

When did that happen?

And then I remembered when I was glued to the news about the earthquake and tsunami in Japan, my adopted country, and couldn’t get satisfaction from the American news agencies, I turned to Al Jazeera. They were doing a bang-up job. NHK, the BBC of Japan was too, but that’s to be expected. 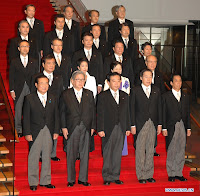 Turning to news sources in the Arab world and China is now part of today’s reality. And it can cause major future shock to somebody of my generation. And it comes not only from noticing how inadequate western sources of news can be at times, and how good the Arabs and Chinese have gotten lately, but at the kind of things they are covering. Here's another Xinhua photo, this time of the new Japanese prime minister and his cabinet, looking straight out of the late 19th century. Modern China covering Modern Japan. Future shock.

Japan never ceased to blow my mind for its interesting juxtapositions. The high tech and the primitive, for example. In 1970 when I first went to Japan I didn't have a flush toilet. But I had a fancy fan to ventilate the place out built into the plumbing. And even a mere five years ago I heated my house in the winter with kerosene space heaters you could program to turn on in the morning and off at night. With childproof buttons. And an automatic turn-off mechanism for when there were earthquakes. And a battery operated starter.

You had sensors for your train passes so sensitive you didn't have to take them out of your wallet, but could just walk by the wicket and they would open the barrier for you. All this stuff to give the foreign traveler mega future shock, and then they dress up in coat and tails, like the guys who surrendered to MacArthur with their top hats and all which they picked up from England when Victoria still believed there was no reason to make laws against lesbianism because women wouldn't do that sort of thing. Still standard today for special occasions like being introduced to the Emperor, or whatever they were up to the other day. photo.

Notice, though, that they don't smile when they have their picture taken. It would make them look like they weren't serious.

Photo by Xinhua, by the way.

Then I happened upon the news that Sweden is worrying about an invasion from Denmark of tanuki(狸). 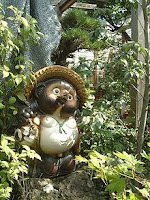 I always thought tanuki existed only in Japan. (You didn’t see the association, did you?) Turns out they are all over North America. It was Hermann Göring who released four of these animals, not native to Europe, back in the 30s. They now number in the millions.

I also always thought that tanuki was translated “badger” but I’ve just learned it is actually a “raccoon dog.” Learn something every day.

They have managed to keep them from coming over from Finland, but they might conceiveably walk across the bridge from Denmark. Or swim. They’re really good swimmers. They’ve got cojones.

That’s the Spanish word for testicles. The non-technical one. Bollocks, the English say. Balls, say the Americans. And it’s “Golden balls (kintama)” in Japanese.

In Japan there’s a kid’s playground rhyme that runs

The rac- rac- raccoon’s balls,
even though the wind has stopped
they still dangle dangle.

It’s sung to the tune of the Baptist hymn, “Shall we gather at the river?”

If you commit the words to memory, you can go to this YouTube video
and sing along.

Meanwhile, back at Xinhua, there's this article about a quarter of a million people in the streets in Tel Aviv and another 40,000 in Jerusalem marching to protest the gap between the rich and the poor in this land of kibbutzim and socialism and sharing.

Imagine that. China, land of first creeping now galloping capitalism and wealth on the coast and poverty inland has a world-class news agency now telling their people about people in other countries marching against wealth inequities.

Israel (I know you didn’t see this association) and I share a birthday. Israel, which has what's got to be the world's most beautiful national anthem, which sounds like Smetana’s Moldau in a minor key (associations), was born on my eighth birthday, a day I will always remember, because I associate it with the fact that we had just gotten a TV set. We were the first in our neighborhood and I knew in an instant I was going to become an addict.

Today I’m trying to keep abreast of what’s happening in Israel because I still remember so well the excitement I felt soon after coming to San Francisco and watching the Six-Day-War on television and listening to Abba Eban and feeling such pride in that little country I shared a birthday with. And an association with television.

Today a lot of that enthusiasm is diminished, and I associate the disillusion with the same disillusion I feel for my own country. Both countries I associate with dreams and the failure to reach those dreams at the moment.

Another thing Israel shares with the United States, besides the fact that its rich are getting richer and its poor are getting poorer is that both countries are undergoing enormous changes in attitudes toward gay rights. They’re way ahead of us in some ways. They have had rights for gays in their military for some time, for example, and gay pride marches in Tel Aviv and all that. But they also have religious wackos telling us gay people make God unhappy and ought to die, or just go away, or something. At least only a few extremists still call for stoning.

Mostly, they are accommodating, even if they don’t like it. For example, in Israel there's at least one rabbi taking an "if you can't beat'em, join'em" attitude and marrying gays to lesbians, telling them to be fruitful and multiply through artificial insemination, and have sex outside of marriage, it's OK, but only if you're really really gay." But if you’re straight, sex outside of marriage is not OK.

You gotta love the accommodation.

Gay stuff continues to provide future shock everywhere you look. In Britain, (and with a nod to Japan’s Liberal Democrats, by the way – associations, you see) a former police chief named Brian Paddick, who married a Norwegian man not long ago and is not happy that his marriage was downgraded to a civil thingie when he returned to London, just won the British Liberal Democratic Party’s nomination for mayor in London. If he wins, London will join Berlin and Paris as European capital cities with gay mayors.

And how’s this for future shock: Fox News has posted an op-ed piece advocating same-sex marriage.

Just like the news that, after upsetting the Anglican Church by appointing Gene Robinson, an openly gay man, bishop of New Hampshire, the Piscalopians have done it again and nominated a married lesbian to be bishop of New York.

Of course where there’s sublime, you know the ridiculous can’t be far behind. The harshness of Soviet ruthlessness continues on, for example, more than two decades after the fall of the wall, as a one-armed man is fined the equivalent of two months of his pension for applauding at a street demonstration in Minsk, and that reminds the locals of the time the deaf/mute was arrested for shouting anti-government slogans not long ago.

And the marines in Afghanistan are being told not to fart.

Things change. Some things, like the gap between the rich and the poor, get worse. Other things, like the progress of gays and lesbians toward dignity and freedom from religious bigotry, get better.

And when the world lets you down, there are compensations. Like having a former student become a friend, move to San Francisco, and convince me, using his chihuahua Iggy as an illustration, that I ought to reconsider my reservations about little dogs, thereby opening me up to the richness of life with Miki and Bubu. 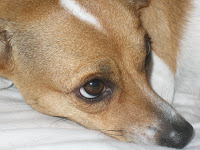 That's Miki, there on the left. 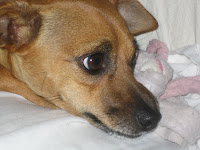 And Bubu (Christian name, Bounce) on the right. 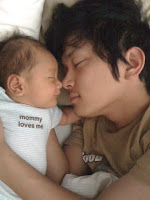 And there is my friend Takashi with the latest member of his growing family.

Not so bad, sometimes, living here in the future.