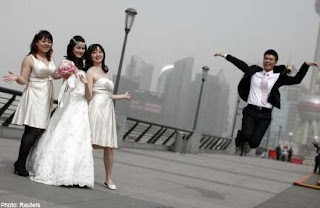 I’ve got a trivia question for you.  Of the 242 countries listed on Wikipedia’s “List of countries by population”  how many of them have fewer people than the number of Chinese women married to gay men?

I won’t ask you to wait for the answer.  The answer appears to be most of them.  178 of those 242 countries have a population of fewer than 16 million, the number of Chinese women that an  AsiaOne article  (from which the accompanying Reuters photo is taken) tells us are married to gay men.

Now we all know that gay men, many of them, manage to have sex and produce children with female partners, particularly when they are young and live up to macho male expectations that one can copulate with anything that moves, if one puts one’s mind to it, and a number of immobile objects as well, seen in the right light, with the right music, and the need to pop or go crazy.

Some of these men love the women they live with.  There’s ample evidence many of them make good husbands and fathers.

The trouble is, among these 16 million there are a great many who don’t.  Men who would have a much better chance of forming healthy loving relationships if they were free to form them with other men.  Men who might even make better loving fathers, for that matter.

All because we have constructed a world of one-size fits all, speaking in penile terms.


But it’s not.  With a population of over a billion people, if the sixteen million women married to bent men had stuck to the five hundred million minus sixteen million who are not bent, give or take a dozen million here or there, the potential for more satisfying sighs in the land of dragons, brocades and won ton soup would increase enormously, it seems to me.


How much better for the mental health of all concerned if China could go the way of Argentina, Belgium, Canada, Iceland, Netherlands, Norway, Portugal, South Africa, Spain and Sweden and six U.S. states and counting in allowing men to marry other men and women to marry other women.  And give them a place at the table by supporting and encouraging their partnership, as Hillary Clinton encouraged the world to do recently in an address to U.N. in Geneva.


Heterosexual women of China, cast off your chains.  Gays are a very small minority of the world’s population.  Encourage your gay friends to come out and tell you who they are.  Encourage them to marry each other and not make promises to you they can’t keep.


Tell the Catholic Church and all the other lousy organizations around the planet preaching that one-size-fits-all message to go take a hike.


Have your gay men friends over to do your hair, cook your meals, write your legal contracts, teach your children, decorate your apartment, give you a heart transplant, fly your planes or run your country.  But don’t ask them to share your bed and go boom boom in the night when it’s not what they want to be doing.


Rise and walk, Chinese ladies.  You got your men to stop binding your feet.  You can make them free you to take this next step, as well.