Our Kids and God’s Anointed 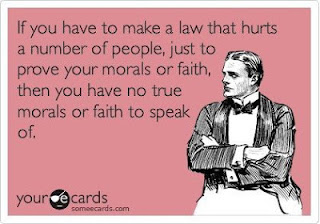 What an awful thing that so many people still look with rose-colored glasses upon the Roman Catholic Church hierarchy.  They should be seen for what they are, a pernicious gang of smug old men on a power trip, jumping in at every turn to control through fear and to manipulate human weakness.   The men and women Vatican II defined fifty years ago as “the people of God” deserve a whole lot better.  This actual Catholic church is made up of a complex collection of folk who adhere to the organization for a broad range of reasons – because they were born into it, because mama would cry if they left it, because it is an island in a sea of uncertainty, because it inspires them to be all that they can be, because it channels their spiritual longing better than any other human organization does.  But the authoritarian power structure of this very sick institution is something else again.  My heart goes out to these good catholics.  How they must squirm each time one of the self-appointed and increasingly authoritarian leaders claims to speak in their name.

Many who are not Catholic come to know Catholics through their work in schools and hospitals.  If our contact with catholicism were with the likes of Sister Helen Prejean, whose life story was portrayed by Susan Sarandon in the 1995 film Dead Man Walking, we’d all be Catholics.  Sister Prejean took up the task of becoming the religious counselor to a brutal murderer on death row when no one else would and fought with all her might to save one man’s soul.  Whether you buy into her faith or not, her selflessness was inspired, and one might actually think a church that could do this for a human soul might be the place to be, if such inspiration as hers were not so overshadowed and mocked by what the institution has come to be known for in recent years.

Consider how the official hierarchy looks at liberation theology, for example.  Liberation theology grew out of an environment where the church hierarchy routinely sides with dictators and the wealthy at the expense of ordinary people.   The movement, rooted in Latin American poverty, has been fought tooth and nail by the pope and the hierarchy because caring for the poor gets in the way of a hard-nosed focus on doctrine.  You can be excommunicated for trying to get the church too close to Jesus.

Another example, and the reason the word “pernicious” comes so quickly to mind, is the current battle over the definition of family.  For many years, Catholic Charities in Boston was a leading force for good, especially in helping to place kids in need of adoption.  Over the seventeen years they were involved, going way back before Massachusetts recognized same-sex marriage, they placed thirteen kids with gay and lesbian families.   In doing their job they followed the guidelines of the State of Massachusetts that there should be no discrimination on the basis of sexuality or any other human category that did not threaten the well-being of children.  In fact, the policy was quite explicit.  Top priority would always be the interest of the children.  Church and state together recognized that there were children with special problems not getting adopted, found there were gay people were willing to take them in, and they followed their hearts – and their minds – to a superb solution.  Winners all around.  Not a loser in sight.

Until the Vatican caught wind of what they were doing in Boston.   Suddenly, in 2005, according to the chairman of the board of Catholic Charities, “the Vatican ordered our diocese to cease using the single criteria of 'best interest of the children.'"  They had a larger goal – to keep up the demonization of gays and lesbians – even if it involved throwing the kids to the wolves.  All 42 directors of Catholic Charities wanted to continue helping as many kids find families as possible.   But they were no match for the pope’s man, Cardinal Sean O’Malley.  Shut down this operation, said the Cardinal.  And shut it down they did.  Vow of obedience, you see.

You will recognize the mentality.  It was the same one at work with the child abuse cases.  We’ve got more important things to do than worry about a few kids.  If the priest abuses a kid, we can shut the kid up and move the priest to another parish where we can keep an eye on him (or not).  Just don’t allow a scandal to get in the way of the flow of donations in the collection plate.  With adoptions, if a few troubled kids have to stay in an orphanage until they are eighteen, it’s a price we can afford to pay rather than to look like we’re not serious about our condemnation of homosexuality.  Besides, although they might find a home to call their own, these kids will end up doubting the need to condemn any and all forms of non-reproductive sex.  Can’t have that.

This all happened seven years ago.  I might be tempted to say it’s water under the bridge.  We’ve moved on.  Gays are adopting kids right and left these days.  There’s no need to wake that sleeping dog.  But perniciousness is once again rising like scum to the top of the hierarchy’s meddling in civic affairs.

When the church bowed out in Boston and elsewhere, others stepped up and the adoptions continued.  In the end, no kids were hurt, although I can’t be sure there weren’t delays.  By the pope’s action, the church merely disqualified itself as an agent of compassion.  The rest of the world worked around them, keeping their eye on the kids.  So far, 65,000 kids have been adopted by gay and lesbian parents, four percent of all adopted kids in the United States.

But that’s not how the church is telling the story these days.  Ask the hierarchy and you’ll find a gnashing of teeth and a rending of garments over how religion was given short shrift, how the state made demands on religion they had no right to make.  Never mind the 42 presumably Catholic folks on the Catholic Charities board who were happy to go along with the state’s insistence  that citing gay parents’ sexuality as a reason for disqualifying them as parents was illegal.  The religious beliefs of the “actual church – the people of God,”  the same folk as the 90% who practice birth control, had to give way, and the views of the hierarchy held sway.

You can see the “church as victim” playing out these days in Washington State.  On the ballot in the upcoming election on November 6 is Referendum 74, which would extend to lgbt people the right to marry.  The majority of American Catholics are in favor of this extension of human rights.  Not so Yakima’s Bishop Joseph Tyson.  In a letter to his flock he states:

I understand, Bishop, you don’t want gays to marry.  It’s tied in with not wanting women to practice birth control.  With teaching boys not to “touch themselves down there.”

But “a loss of civil rights”?  Now that is some sweet double-talk.

Loss of equality for the most vulnerable among us?  The children?

Joseph.  Joseph!   Do you hear what you’re saying?