No to Dark Ages Morality 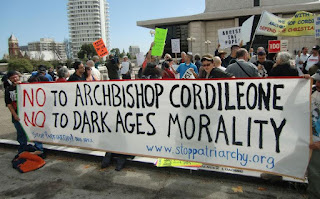 As is often the case, there's more meat in the discussion that follows than in the article itself.   I find it naive that some are claiming there is separation of church and state in this country, and therefore the Board of Supervisors should have nothing to say about the installation of a radical hardliner as Archbishop of San Francisco.

Separation of church and state is an ideal state, not a present-day reality.  Like democracy, it exists only in the daily reminders of how far we are from that ideal and how hard we have to work to reach it.

The Vatican has made a decision to teach lgbt people a lesson by putting a man like Cordileone in charge of Bay Area Catholics.

Fortunately, the majority of Bay Area Catholics know when to tell the good Archbishop when to take a hike.  Most times of the day on most days.

It gets tiresome to keep beating this dead horse, and I don't want to repeat what I said a couple days ago.

But if you're following the story about this new attempt on the part of the Chief Shepherd in the Vatican and his dogs to get his flock back in line, protests like the one outside of St. Mary's Cathedral in San Francisco are noteworthy.

Sometimes you've got to feel sorry for His Holiness.  Beating away at the outer reaches out here in San Francisco, while his own butler is being abused (I don't want to say tortured.  It's not torture to keep a man in a cell with the lights on day and night, is it?) for stealing his private papers.  Not to hurt this man he loves and works for, he says, but to expose corruption.   Watching the pope try to fix San Francisco is like watching a man trying to hang onto his dignity with his pants down around his ankles.

In any case, here's the latest about the outspoken catholic members of the San Francisco Board of Supervisors giving the archbishop something less than a 21-gun salute of welcome.

11:57 AM on October 5, 2012
If we had real separation of church and state in this country, those urging the BOS to keep silent about this man's appointment would have a case to make. But he represents the institution chiefly responsible for taking away the right of lgbt people to marry, non-catholics as well as catholic gay people. He speaks for "freedom of religion" but ignores the fact that most catholics don't agree with him. Freedom of religion ought not to be restricted to the Roman Catholic hierarchy. He works to impose limitations on women (again, non-catholics as well as catholics) that range from uncharitable to inhuman. Protesters outside of St. Mary's are doing a real service to the community by revealing who this man really is and what he represents. Thank you, catholic (and non-catholic) members of the Board of Supervisors, for speaking out as well.