Taku and I had a lovely pizza dinner at friend Jason's last night (salmon pizza, another with Italian sausage, a third with "white" vegetables - all in loving memory of Jason's partner, Anthony, whose pizza-making talents were legendary.

Taku is heading for Japan shortly for a memorial service for his grandmother and has been out buying a black suit and black tie so as not to stand out as an ugly American with a Hawaiian shirt for the occasion.  And the talk, over pizza, turned to death and dying and other things funereal.

"What are those slats you find at Japanese graves?" Jason asked.

"I don't know," Taku answered.  "Something written in Sanskrit."

The first thing I discovered, as I went digging this morning, was that those flat-faced wooden slats you find next to Japanese graves are called sotōba.   In Chinese characters, that’s: 卒塔婆.  And that strikes me as terribly curious, since sotōba  (actually the second o is a long o, so it’s pronounced so-toe-oh-ba, ((but say it real fast so nobody thinks you’re stressing the oh)) ) is actually the Japanese way of saying “stupa.”  And stupas, as you know, are those round things that look like an inverted tea cups.  So how did tea cups turn into flat sticks, Roseanne Rosannadanna wants to know…


All-knowing Wikipedia has this to say about stupas: 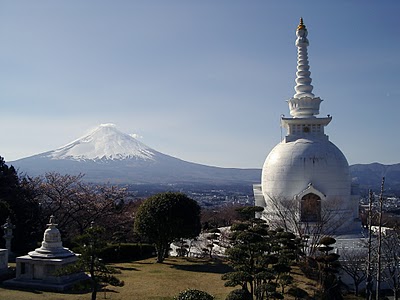 Type 卒塔婆 into your Japanese-English Google translator and you’ll see it translates it as “stupa.”  Wikipedia makes mistakes, but Google is never wrong.

Here (above) is a picture taken by a blogger of a stupa in Gotemba, near Mt. Fuji:

And here are a couple of images of the sticks we're talking about, also known as stupa/sotōba. 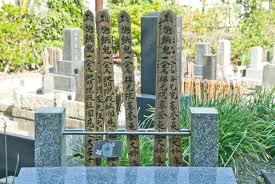 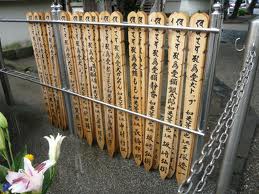 You’ll see the sotōba are written in Chinese characters in the top picture, not Sanskrit, although Taku insists he remembers them being in Sanskrit, like the ones in the bottom picture, and people complaining after paying the Buddhist temples all that money to get a dead ancestor a name, it’s a shame they can’t read what it says.  In Chinese characters, they could sound it out, at least.

And that brings us to the content written on these sticks/stupas/sotobas.  What’s written on those sticks/planks/pieces of wood (no offense intended) is the “kaimyou” 戒名.  The “kai” means “instructions, or “warnings”, the “myo” means “name.”  So the “name you use when you are on guard” is the posthumous Buddhist name you are given after you die.  For which you drop a little cash into the collection box.

According to one source, those crafty Buddhist caretakers have been gouging the bereaved of late:

Bereaved families throughout Japan have been shocked by the amounts of money charged by priests and temples. Bills totaling several million yen are not uncommon and have left many people feeling like victims of price-gouging.

… “Kaimyo is not a commodity to be traded for money,” says the Japan Buddhist Federation, comprised of 60 established Buddhist sects.  “Any money or gift you give to your priest or temple is strictly a donation you offer voluntarily.”

The same article says a kaimyou name is made up of only two characters, but you can beef it up by adding more characters to give the deceased a higher rank.  And why would you have poor gramps live his eternity as a corporal when you can make him at least a colonel?  Originally everybody got a kaimyou when they embraced the Buddhist faith.  Apparently now you only get one when you pop off, evidently because – in Japan, at least – that’s the first time you get really serious about your religion.

Kaimyou is also translated “precept name” – precepts as in rules for living: no harming living beings, stealing, sexual misconduct, lying and intoxication, although why you should slap the rules for living on somebody just as he passes off his mortal coil remains a mystery to me – as was the reason a stick is called a stupa, which sent me off on this quest for answers. 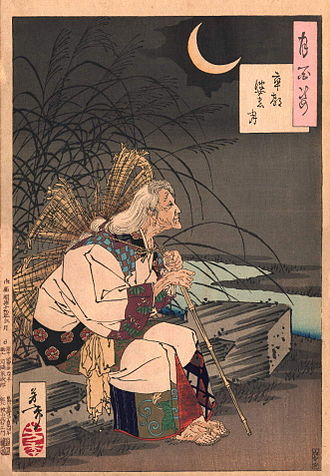 In digging around, I kept coming back to the story of the “Sotoba Komachi,” which in Arthur Whaley’s account of the story, is about an old woman named Komachi who sits and rests on a “stupa” (Sotoba no Komachi = “Komachi of the stupa”), which is described now not as a teacup but as a “log carved into five parts, representing the ‘five elements’.  Komachi is apparently well-known to those up on Noh drama.  Ono no Komachi was a 9th century erotic poet known for her beauty.  She is courted by Fukakusa no Shosho.  She tells him if he will visit her continuously for one hundred nights, she will become his lover.  He almost makes it, but misses one night and she has to turn him down.  Whereupon he dies of a broken heart.  And then his death sends her into such grief that she dies.  Things were tough in the 9th Century.

Her story lives on in Noh Drama and in poetry.  Here she is, in her old age, sitting on a stupa (a highly irreverant act, we have to note).  Which leads to another question.  If she dies of grief, what the hell is she doing sitting on the stupa in her old age?  Answer one question and another just pops up.  Apparently she lived to a ripe old age and had plenty of time to "meditate on the arrogance and heartlessness she displayed to her suitors as a young beauty" (so this happened more than once?) before dying of a broken heart.

What ties this all together, actually, is this thing called the gorintō, which means “five-ringed tower,”  also called a “gorinsotōba,” (五輪卒塔婆).  There you can see the link between the sotōba and the wooden log, which the stick has come to represent.  I won't go into it - you can read the explanation for yourself.  For more details on the gorintou than most people could possibly want, check here and here.


So much Google can teach you when you let your fingers do the walking.  This search took a while, but I got there.  The real fun part, though, were all the distractions along the way.

The high prices of funeral plots, costing on average 2 million yen, have led to a new service of Grave Apartments (お墓のマンション ohaka no manshon?), where a locker-sized grave can be purchased for about 400,000 yen. Some of these may even include a touch screen showing a picture of the deceased, messages, a family tree, and other information. Due to the cost of land, a graveyard in Tokyo has recently been opened by a temple in floors 3 to 8 of a nine story building, where the lower floors are for funeral ceremonies.[citation

It would appear that, in Japan, at least, you can die and immediately “move upstairs.”

And, alas, Japan is not the crime-free paradise it once was.  Apparently you can get your ashes stolen for ransom.

Next time you're in Kyoto, you might want to visit the five-part stupa at Mimizuka.  Mimizuka, incidentally, means “Ear mound,” which is a take-off on the Hanazuka (“Nose-mound”) which is a monument to the noses of Korean soldiers removed from the corpses by Japanese soldiers when Toyotomi Hideyoshi invaded Korea between 1592 and 1598.  Originally they were supposed to bring the heads home, but no doubt somebody discovered along the way that less is more.

Anyway, you can see (left) how the stupa is now getting vertical. 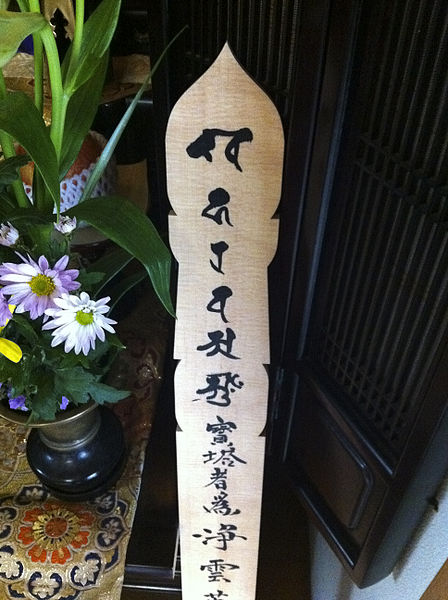 And here you see (on the right) a close-up of a wooden stick divided into the five parts.

The search for the what these sticks were on all these Japanese graves, which led to the discovery that they were the same thing as stupas, is now solved.  Check out here, for example, where you read, just to sum up:

The stupa was originally a structure or other sacred building containing a relic of Buddha or of a saint,[5] then it was gradually stylized in various ways and its shape can change quite a bit according to the era and to the country where it is found.[3] Often offertory strips of wood with five subdivisions and covered with elaborate inscriptions also called sotoba can be found at tombs in Japanese cemeteries (see photo below).[2] The inscriptions contain sūtra and the posthumous name of the dead person. These can be considered stupa variants.

And there you have it.

See where conversations over pizza can lead you.

The sotoba in a quiet graveyard in Kyoto emitted the gentlest 'click click' in a soft breeze. The spirits of the departed seemed to be whispering, and those few words were carried upwards into the heavens.