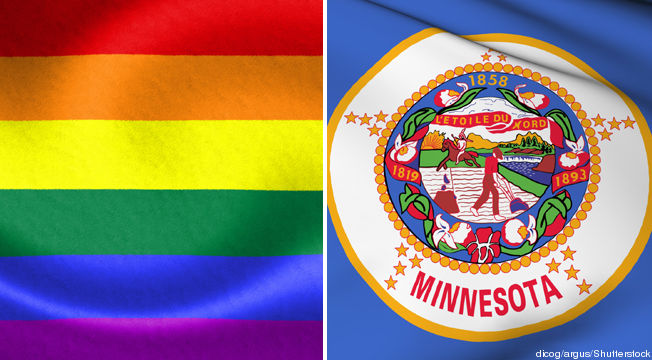 Some people have used “Right Coast” and “Left Coast” to refer to the cultures of the United States.  It’s a forced label, a way of slamming the folks on the West Coast for being lefties.  I say forced, because what’s the reason for calling the folks on the East Coast, splendid as they can be, “right?”

It’s one of those labels that masks as much as it reveals.  But I bring it up because I just heard that Minnesota has passed a same-sex marriage bill.  By a healthy margin (75 to 59) in the House and a pretty satisfying one in the Senate (37 to 30) as well.  I have this boxing image of knocking the opposition, left, right, and now center.  I know that does a serious disservice to Iowa, who got there first.  But people kept calling Iowa a fluke.  Now, with Minnesota also allowing gays and lesbians to marry, Iowa has shown it was more a trend-setter than a fluke.

So close on the heels of the state senate vote in Rhode Island in April, extending the rights to all six New England states, and Delaware a month earlier, Minnesota seems like a much bigger deal, not just because of the fact it extends gay rights north from Iowa farther into the heartland of America but because Minnesota was one of those states where it clearly looked for a while like it was going to go to a constitutional ban.  It’s a really dramatic turn-around.   Minnesota, remember, is where that catshit crazy lady, Michele Bachmann, comes from, the wacko arguing now that 9/11 and the Boston Massacre are the punishment of an angry God on a sinful nation.  Following her logic, they need to dig up Tamerlan Tsunaev's grave in Virginia and put his remains wherever we put those folks who died serving the Lord's purpose.  Ms. B. also makes the argument  that what has just happened "denies religious liberty to people who believe in traditional marriage," a deliciously original way of using the English language, since no liberty has been taken away except the alleged liberty to take away other people's liberty, which liberty no one in this country has in the first place.  "How dare you take away "my right" to dictate what rights you should have?" she is saying – "You have no right to remove my right to stand on your toes."

What a relief Minnesotans with a brain must be feeling to see some evidence she doesn't speak for the whole state - even if they don't agree with the outcome.

Also significant is the speed of change.  It all started in Massachusetts in 2004, but it was four more years before California and Connecticut would follow suit in 2008.  Now we have three states approving it in very rapid succession and bringing the total to twelve.  (I should note that the "approval" dates vary depending on whether you count the days, like this one, when the second house of the legislature approves it, the date when the governor signs it, or the date it goes into effect.  Minnesota's law will go into effect on August 1, if the governor signs it - and he has promised he will.)

Twice in my life I have gotten involved in gay politics at a time when we faced a formidable opposition to gay rights.  The first was the Briggs Initiative, when Anita Bryant was on the verge of convincing Californians that if we allowed gay men to teach in the public schools they would abuse their children.  The second was when the Catholics and the Mormons teamed up to buy enough airtime to persuade the next generation of gullible Californians of something similar – gays are not people to be allowed near your children.  Because of those scare messages, the majority voted to take away the right of gays and lesbians to marry in a state referendum, the infamous Prop. 8, the constitutionality of which is now being debated in the Supreme Court.

We know exactly where that anti-gay message originates.  Ratzinger, who became Benedict XVI of the Roman Catholic Church, has referred to gay people as “intrinsically disordered.”   He had earlier referred to homosexuality as an “intrinsic moral evil.”   That message was passed on to American Catholics by their bishops in the fall of 2006, when Bishop Arthur Serratelli of Paterson, N.J., head of the committee on doctrine, declared: "Homosexual acts are never morally acceptable. Such acts never lead to happiness," he said, because they are "intrinsically disordered."

Interestingly, American Catholics knew when to let things go in one ear and out the other.  Polls show Catholics are ahead of the average American voter in approving the rights of gays and lesbians to marry.   You’ve got to wonder about the intelligence of the likes of Serratelli, a grown man who claims millions of people cannot be happy because they do not share catholic hang-ups.

The other source of funds buying misinformation has been the Mormon Church.  There too, there has been an interesting development.  Thanks to the dogged efforts of Fred Karger, among others, the once hidden fact that the church had had 77 people working on the California debate over Prop. 8 in their headquarters in Salt Lake, has been exposed, and there has been a huge backlash.  So much so that the church is now apparently backing down.  It was effectively a no-show in the Rhode Island debate, for example.

Possibly the most dramatic revelation, though, of how homophobes work may be in the latest tax return of the so-called “National Organization for Marriage.”   It turns out this group, which claims to be the voice of conservative America, is actually 90.5% funded by ten individuals.  70% funded by two individuals.   What once looked like it might be a serious grass roots effort turns out to be just another example of Americans trying to buy votes.   Not so much a story about homophobia as a story about how money talks in America.

It’s like watching sand castles being washed away by the tide.

There’s still tons of work to do.  Best guess on the Supreme Court decision seems to be they are going to throw it back at the states to decide.  If that happens, we will have to go state by state through these expensive debates and discussions and votes to rescind the constitutional amendments prohibiting same-sex marriage.  That will take time.

I just watched the cray-cray lady (Mrs. B.) holding forth in a video several years ago about how, if Minnesotans don't resist, activist judges will impose the Massachusetts model on--gasp!--the heartland state of Minnesota. This was when only Massachusetts had walked down the path of equality.

Just as you say, Alan, it means much that this is happening in the very center now!