Don’t be surprised if they get violent

"But the proper reaction to crimes committed against homosexual persons should not be to claim that the homosexual condition is not disordered. When such a claim is made and when homosexual activity is consequently condoned, or when civil legislation is introduced to protect behavior to which no one has any conceivable right, neither the Church nor society at large should be surprised when other distorted notions and practices gain ground, and irrational and violent reactions increase."  source 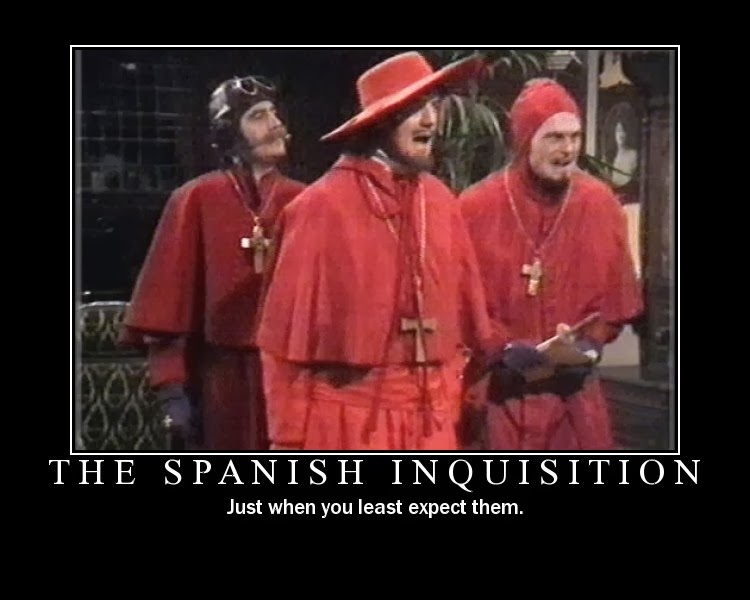 These two sentences should be read aloud, repeatedly, at frequent intervals, in private and in public, until those trying to make the case that the Roman Catholic Church is a force for good in the world see the absurdity of their claim.

The source of this license to hunt is Vatican City, the so-called Congregation for the Doctrine of the Faith, the organization known in earlier times as The Holy Inquisition. Effectively, it is the voice of the pope, the “magisterium,” the “official teaching” the Roman Catholic Church puts up there as authority on a par with Biblical scriptures.

The church is behind such notions as the “white man’s burden” no longer.  Racism is out.  Sexism is still there, but at least they’re embarrassed by it and are making a feeble attempt to make us believe there is nothing sexist about claiming that only men – and not women – are authorized by God to turn bread and wine into the actual body and blood of Christ.   But they’re still not making the slightest effort to hide the church as a major source of homophobia.

Your church may love you, they tell you, but only if you admit that you are “disordered” by nature.  Christ may have loved you unconditionally, but we have made some adjustments.  Our love for you is conditional upon your agreement to live without a helpmate in life, without expression of physical affection, and with the recognition that if some thug hits you over the head in a dark alley, you yourself are responsible.  Not just for being in the dark alley, but for being who you are.

“We made a mistake,” this document tells us.  We put out the word in 1975 that a distinction is to be made between being and doing.  It was OK to be gay.  You just can’t act on it.  We were wrong.  We should not have given you license to think that being gay was OK.   Should not have suggested that landlords should rent to you, or that you should be allowed to teach children.  The inclination to be gay or lesbian should be seen as a “tendency…towards an intrinsic moral evil…an objective disorder.”

And there it is, in paragraph #7, the warning that neither the Church nor society should be surprised when “violent reactions increase.”  No word about the wrong being done by people with violent reactions.  Merely a warning that they are part of the natural order of things.

Paragraph 11 uses the word “discrimination.”  At least the holy fathers of the Congregation for the Doctrine of the Faith call a spade a spade.  But note the two words immediately preceding – “not unjust.”  We can discriminate, yes.  And it is just to do so.

Paragraph 12 makes a comparison with those who are contagious or mentally ill.  The government has a right to restrict their behavior.  In like manner, they have the right to limit how you come and go, Mr. or Ms. Disordered Person.

Paragraph 16, the final paragraph, sums it up.  “(I)t is inappropriate for Church authorities to endorse or remain neutral toward adverse (i.e., pro-gay) legislation even if it grants exceptions to Church organizations and institutions (italics mine).”

This wretchedness was written by Ratzinger in 1986.   Lots of things have changed in the past twenty-seven years, but to my knowledge, this “teaching” is still in effect.  [For an extensive background treatment of the issue, see here.]

Have no doubt about it.  The official Roman Catholic Church is Homophobia Central.

The question is not whether to fight homophobia – fighting homophobia is a cause millions of us, gay and straight, will engage in as long as we live and breathe.  The question is how.   If left to my own devices I’d go on calling for a Samson to bring the entire church structure down on their wretched heads.

But I recognize there is another way.  There is a critical mass of Catholics working within the church who believe the church can be brought closer to the image of the Christ who preached the Sermon on the Mount.  That is, after all, just about the only place in the Bible, supposedly, where you find the actual words of Christ.  We can at least cheer these Catholics of good will on in their efforts to “get their church back.”

I have no idea what the odds are.  Many are finding encouragement in the direction the new pope seems to want to move in.  I’m not so sure he can make it happen – or even that he wants to.  But the Ratzinger voice behind this updated (in 1992) promulgation has been toned down a bit by the new pontiff.   Let's hope he can remind his flock there’s no Beatitude which goes, “Blessed are the violent, for they shall surprise no one when they beat up on gays.”

Note: I wrote this in response to a blog posting by one of those Catholics working from inside – although he has to pedal pretty fast to stay there, I understand.  It’s definitely worth a look.