The Bishop of Bling 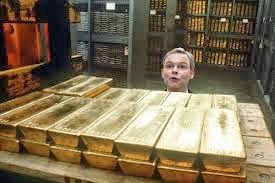 I’ve been following with great interest the latest church scandal in Germany.  This one involves the revelation that a prince of the church decided he wanted to actually live more like a prince.  As can often happen with news events, this is turning out to be a veritable Rashomon of a story, with so many ways of telling it and a list of implications as long as your arm.

I’m talking about the Roman Catholic Bishop of Limburg, Bishop Franz-Peter Tebartz-van Elst.  You can tell from the Dutch-looking name that his roots are in the low German lands.  Also Dutch-sounding is the name of his birthplace, Twisteden – low German for Twin Cities.   The “Elst” in his name is the Dutch city of Elst, a town just the other side of the Dutch university town of Nijmegen, about 35 miles to the Northwest.

All of these facts are totally irrelevant to the scandal.  It’s just that when you’re digging around for background information on somebody these days, you come up with all sorts of curious trivia.  My North German mother came from Plattdeutsch speaking people who counted to ten – een, two, tri, vier, fif, sex, seven, acht, negen, tin and asked the time with “Vo feel klock hev vi” (How much clock have we?) instead of standard German, “Wieviel Uhr ist es?”  I have always felt some kind of connection with lowlanders, whether German, Dutch or Flemish folk.

Franz-Peter is interesting to me much more, however, because, like his fellow German Catholic Joseph Aloisius Ratzinger, he began his life as a liberal cleric and had a crisis of faith at some point which turned him into a conservative.  Ratzinger was turned off by watching the students of the sixties run wild.  I don’t know what turned Franz-Peter.  That’s another trivia tangent to chase down some day if I ever run out of things to do.

In any case, Franz-Peter bought the line of the traditionalists that authority in the church needed to be restored and respected, that his word as a bishop required unquestioned obedience, and, it would seem, that he could enhance that authority by living like a prince.  What got him into trouble was his decision to spend over forty-two million dollars on a residence in a town with only about 33,000 inhabitants.  (There are several Limburgs – one in Holland, one in Belgium.  This Limburg is usually distinguished by the river it’s on, and the town is commonly called Limburg-an-der-Lahn.)   Moreover, I’d have to dig some more to find the latest census for Limburg, but the 2011 figures for the state of Hesse, where Limburg is located, shows it has fewer than a quarter of the population listed as active Roman Catholics.  These are rough hasty calculations, but doesn’t that suggest an outlay of $42 million for about 8200 local citizens?  Even if you consider the importance of the cathedral (it appeared on the back of a 1000 Mark bill at one time), that’s a lot of bucks for not a lot of people.  Particularly when you consider these 8200 people, most of them, would never actually get to take a bath in the 15,000 euro bathtub. or sit at the 25,000 euro conference table.  Or, for that matter, even worship in the 2.9 million euro chapel.

Headlines in this morning’s papers reveal that the pope has relieved him of his duties.  Church officials appear to be greatly relieved, thinking this decision by the Poverty Pope will quiet things down.  Maybe the story will go away.

The cat’s out of the bag.  Not only are people like me entertaining themselves with all sorts of trivial information – the number of towns called Limburg, for example – but some people are asking far more piercing questions.  Like where the hell did all this money come from in the first place.  And what on earth gave this bozo the idea that he could spend it on his own digs?

Why, many are asking, did Franz-Peter break down the projects into small pieces, each costing less than five million.  It couldn’t be that if a project costs more than five million you have to get Vatican approval, could it?

Why did Franz-Peter take a first-class plane trip to India to have his picture taken caring for the poor?  His own excuse, that he needed to arrive well rested, because it wouldn’t do the kids any good to have him arrive with bags under his eyes, might be excused as an exaggeration, but not a lie.  But then why did he insist he went Business Class when he actually went First?  And why, for heaven’s sake – is the guy stupid? – did he submit two false affidavits to this effect to the Regional Court of Hamburg, thus make himself guilty of perjury?

Like many drunk with the power of their office, Tebartz-van Elst seems to be clueless about how many of his flock have his number.  He has issued statements which suggest he was guilty of little more than a peccadillo here and there.   And the arrogance knocks your socks off.  “Even a bishop,” he notes in a letter to his flock about the scandal, “is not immune to doubts and must be able to bear criticism,” as if it were about his doubts and not about deception and stunning malfeasance. 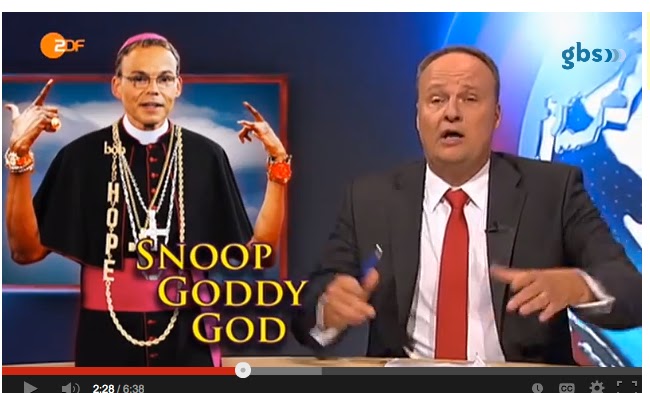 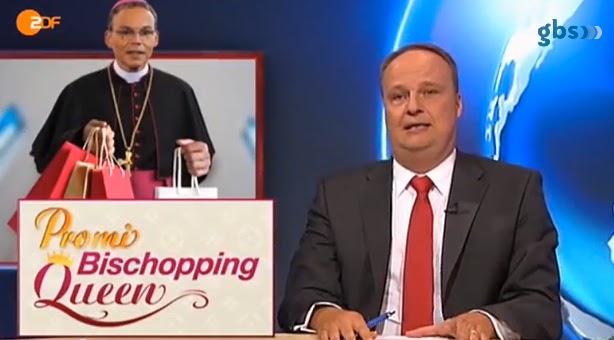 It’s all over when a bishop becomes a laughing stock.  Light artist Oliver Bienkowski  yesterday projected a caricature of the bishop onto the facade of the cathedral with "Thou shalt not steal" underneath.   One German TV comedian on the Heute-show (The Today Show), evidently realized the best way to satirize the bishop was to let him hang himself with his own words.  At minute 3:57 it shows him explaining why he needed to sleep in a first class bed on the plane.   Speaking of the folks he went to visit in India, he says, “You have to see it through their eyes.  I kept these people waiting for four years. Imagine if I arrived overtired.  That would be no fun for them.”


At least one conservative Catholic blogger has come to his defense.  According to Mark de Vries of In Caelo et in Terra, Archbishop Jean-Claude Périsset, the former Apostolic Nuncio to Germany, was not only aware of the construction plans but also agreed to the splitting of the plan into ten smaller pieces.  De Vries cites the German press agency KNA as the source of this information.  Curiously, Archbishop Périsset retired eight months early.  Could be another coincidence.

And, by the way, you’ve got to love the comment to this article, “Let’s pray for the Bishop.”

To get back to the questions people are asking, on the Anna Will talk show the other day where a panel of guests discussed the “Bishop of Bling” and all the goings-on, somebody implied that this was money paid for by Catholics through their church taxes.  But that misconception quickly got clarified.  Only part of the church’s expenses (and this goes for the Protestant Church in Germany, as well) is paid by church taxes assessed on its members.  There is also this thing known as the Dotatio.

For history buffs, this is where the plot thickens.  Apparently when Napoleon took the lands from the church west of the Rhine he agreed to compensate the churches east of the Rhine.   Details make your eyes spin in their sockets, but somehow the state inherited that obligation which obtains to this day.  Church taxes, which amounted to €4.3 billion ($6 billion, U.S.) in 2011, go only so far.  A great deal of money for clerics’ salaries and church property upkeep comes from that Dotatio, which came to €480 million ($661 million, U.S.).  That means that every German taxpayer, Jew, Muslim, Protestant, non-believer as well as church members, is paying for that 15,000 euro bathtub.   And to put numbers to that group, some 30.8 million Germans are not members of a church.  That’s a lot of people to piss off, if they ever get wind of what’s going on here.

Two facts behind these figures twist the knife in the back of those the church has no use for.  One is the church tends to get credit for all the Catholic schools and hospitals, even though in many cases 100% of the costs are picked up by state.  They do not come from church funds.  Second, despite using general taxpayer funds, the Church can still keep gay people from working at those institutions or fire gay employees on the spot if they reveal they are gay.  It can also fire at will a man or woman who divorces.  Keep birth control information under wraps.  The argument runs that this is a church-run institution and it therefore has the right to dictate how it is run.  Many people have made it their life’s work to correct this form of taxation without representation.  One such person is Ingrid Matthäus-Meier, for example - who points out (the lecture is in German) that although many people think there are two official state churches in Germany, one Catholic and one Protestant, in fact neither of these, according to the constitution, is official.  Germany has official separation of church and state.   Now that Tebartz-van Elst has brought Ms. Matthäus-Meier's cause into sharp relief, who knows what will come of this story in the days to come.

There’s a new pope and he’s embarrassing everybody by focusing on things like Matthew 19:21 where it says, (using the Douay-Rheims version approved by the Catholic Church): “Jesus saith to him: If thou wilt be perfect, go sell what thou hast, and give to the poor, and thou shalt have treasure in heaven: and come follow me.” 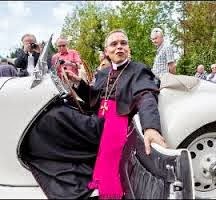 Bishops in silks and satins have been around as long as anybody can remember.  Bishops with jewel-encrusted fingers are old news.  Much as people would like to take them away from them, too many people still labor under the conviction that clerics deserve veneration, despite a few bad apples “on the periphery.”

Even with the child-abuse albatross around their necks, the Roman Catholic clericalists (those who argue clerics are a cut above normal people and have earned special benefits) still miss the point it isn’t the bad apple priests with stunted sexualities at the heart of the story but the clericalist idea of a solution: to hide the problem under the rug, pay victims to keep silent and shuffle the victimizers around where they can continue to commit sexual abuse.

Sex and deception scandals have done great harm to the institutionalized church.  But in the long run, it might just turn out that widespread anger and resentment over church finances will be even harder for the church to deal with.   The church rode out corruption in the Vatican Bank and suggestions of Mafia involvement.  But that was some time ago, before the current disillusionment with the state of the hierarchy set in.  People today have a shorter fuse.

“A mark, a yen, a buck or a pound – money makes the world go ‘round” sang the Berlin host in Cabaret.

It could also be the thing that stops the church from going around and brings the princes of the church to their knees.

And I’m not talking in a Hail Mary kind of way.

the bishop and the fancy car;
two shots from the Heute-show from German television