I’ve been following the distressing news in the German press today that the German-Egyptian journalist and writer, Hamed Abdel-Samad, has evidently been kidnapped in Egypt.  His brother called the German Embassy when he realized he had gone missing yesterday without a trace, and there is good reason to suspect he has been kidnapped by Islamicists.

Abdel-Samad is best known for his appeal to the Muslim world to modernize.  He has achieved wide recognition in Germany and in Egypt with the publication of his books on Islam and the Muslim world, especially his autobiography, Mein Abschied vom Himmel (My Farewell from Heaven), and a book entitled Der Untergang der Islamischen Welt (The Fall of the World of Islam) for which he has received threats on his life.   Another book on Islamic fascism is due out anytime.

Aside from his criticism of Islam, he has been considered at risk for his public statements supporting the removal of Egyptian President Mohamed Morsi from office last July.  It is Abdel-Samad's view that, while the coup was “technically illegal,” it was also legitimate, because no sooner had Morsi taken office than he set about abusing his powers.  It remains to be seen which of Abdel-Samad's critics took these latest steps to silence him.

The German Foreign Ministry is getting involved.  They say they have a crisis team working on the case.  There is a petition on Facebook you can sign if you want to put more pressure on the Ministry.  I’m never sure how much those pressure points help, but it feels better than sitting back and doing nothing.

Most people in the U.S. have never heard of him, I imagine.  To get a glimpse of who he is, click here. 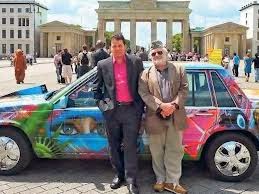 I’m a fan and I’ve read most of his work.  I began to follow him after watching the videos he put out with Henryk M. Broder about their trip together around Germany in search of understanding of German attitudes toward minorities and their integration into German society.  Broder, a non-religious Jew, and Abdel-Samad, a non-religious son of an Imam, referred to their trip as their Germany-Safari.   Their travels were filmed and the series was well received on Germany’s Channel One.   It is available in its entirety on YouTube.   In German, and with no English subtitles, unfortunately.

Abdel-Samad has his critics.  Some complain he lacks academic qualifications and is too much of a self-promoting popularizer.  I find those ad hominem attacks unworthy and believe his contributions to the discourse on cultures in contact in Germany have been quite useful and informative.   He has been a major source of information in Germany about the Muslim world.  In any case, whatever you may think of his views on things, the horror of seeing him kidnapped should make anybody interested in a free press and a free exchange of information stand up and take notice.  Stand up and holler, actually.

Please pass the word, if you are able.

I would hope if Abdel-Samad doesn’t show up soon, people in the U.S. and everywhere else will join the efforts to find out what has happened to him and insist he be let free.

photo credits:  Hamed Abdel-Samad in TAZ.
Abdel-Samad and Broder in front of the Brandenburg Gate from the Tagesspiegel, Nov. 11, 2010, reproduced in tomorrow's edition