Scotland voted on Tuesday night to extend marriage rights to gays and lesbians by a better than five-to-one margin, 105 in favor to 18 against, with no abstentions.   It was a tremendous victory for the world's seventeenth nation to do so.

I’m not ready to paint my face blue and race across the heath shouting “Alba gu bràth!” exactly, but I’m feeling very proud of my Scottish roots indeed these days and wondering why the whole world isn’t eating haggis, pulling their kilts out of mothballs and playing “Somewhere over the rainbow” on the bagpipes.

I’m a child of immigrants.  My father was born to a Scottish-born father and an English/Irish/Scottish Canadian mother.  My mother was born in Germany.  I leaned a little closer to the German side, but spent the summers in Nova Scotia growing up where I acquired a powerful sense of Scottish identity.  At sixteen I ended up in the hospital in Antigonish for a month and since I had no family with me – they all had to go back to the States – I was sort of
taken in by Gaelic-speaking priests from the local Catholic university.  There was one radio station I could listen to.  It had bagpipe music every afternoon.

Because I was fascinated with foreign languages as a kid, being among Gaelic speakers naturally led me to an interest in the language (my grandfather was a lowlander and like most Scots didn’t speak Gaelic) and I actually went to Scotland at one point looking (naively) to study it.  In the 1960s, though, the people I asked about possibilities all suggested I’d be better off in Ireland, and that was the end of that.

But I’m getting distracted.  I just wanted to explain why I have more than a passing interest in this marvelous evolution of Scottish consciousness. 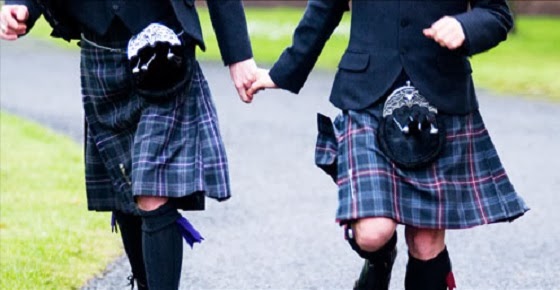 The Pàrlamaid na h-Alba, as the Scottish Parliament is known in Gaelic, or the Scots Pairlament, if you want to say it in the Scottish version of modern English, or “Holyrood” as it’s known to locals, after the neighborhood in Edinburgh where it is located, made their debates available on line for a time.  And because they did, I was glued to my computer screen for most of Tuesday and much of Wednesday watching Motion #8915, the “Marriage and Civil Partnerships Scotland” Bill, go through its final stages.  Most of the debates, including a very informative one on proposed amendments, have since been taken down, but as of this writing you can watch the final debate on a BBC site.  I don’t know how long they will keep it up, but for now it’s available here.

It was my first contact with the Scottish Parliament and I have no idea how typical the mood and the manners of that unicameral body were that I watched in this debate, but I am left with a powerful impression of a well-oiled machine and some amazingly capable and articulate people running a country.  The civility of it all impressed me no end.

To be fair, this debate may not be typical of what normally goes on there.  It was the final step of what was by now a foregone conclusion.  They knew the bill was going to pass overwhelmingly.  Pretty much all they were doing at this last stage was debating a last-ditch attempt on the part of conservatives, almost all making religious references, to impose amendments that would weaken the bill and cast the whole attempt to extend marriage eligibility to same-sex couples in a very dark light indeed.  Holdouts attempted to argue, without convincing anybody on the other side, evidently, that the bill would discriminate against those who don't agree with the changes.  Proposed amendments included one which would have required a review of the law in five year’s time, “in the event of unintended circumstances.”  Proponents recognized this as a stealth amendment, which would have suggested the law was feebly conceived and up against some serious opposition, and it would have put same-sex marriages in limbo.  In fact, the opposition, by now, was utterly minimal.  The final vote vindicates their refusal to add that or any other hat-in-hand amendments, and the victory was sweet indeed.

I have been following the progress of same-sex rights all my life and what strikes me most about this event is how utterly ho-hum gay liberation has become.  Applause for a day, maybe, but if you look to Scotland for the news these days, it’s yesterday’s news.  You're more likely to come up with things like

England have named an unchanged starting XV and bench for Saturday's Six Nations meeting with Scotland at Murrayfield.

And, of course, the ongoing talk about the fact that the Scottish National Party now has a majority in Parliament and could for the first time seriously entertain the idea of secession from the U.K.  I’m not unaware that sports outweighs most things and that the possibility of secession is an issue which affects far more people far more seriously than gay rights, but I’m also amused – and not displeased – that gay rights advances no longer make the splash they once did and can be moved to the back burner in less than twenty-four hours.

Same sex marriage in Scotland was an idea whose time had come.  First off, Scotland began the debate even before England and Wales, which legalized same-sex marriage last year.  It has had a very good hearing.   Moreover, as Jackie Baillie, Labour representative for Dumbarton, pointed out  (at minute 12:10), popular support for marriage rose an “astonishing 20%” in the space of eight short years between 2002 and 2010, from 41% to 61%, and there is no reason to think this trend has not continued.   Even among those in “opposition groups,” Scottish Presbyterians are 50% in favor and only 25% against, and Scots Catholics are 55% in favor and only 21% against, making the point that when church hierarchs claim to be speaking for the church they are not speaking the truth.  Furthermore, support crosses economic classes, as well: 67% of those living in poorer areas support it; 63% of those in more affluent areas do as well.

A telling indicator of the progress of gay rights in Scotland was/is the presence in the Scottish chamber of gay members of the Scottish Parliament (MSPs).   Jim Eadie, Scottish National Party member (Edinburgh Southern) fantasized aloud in a speech to his colleagues.  The time will come, he said, tongue fully planted in cheek, when he could imagine…

…Perhaps a personal ad in The Scotsman, ‘Slim, athletic professional 45-year-old male seeks husband to share his life and passions.  Must like a good debate but not take themselves too seriously.  All applications will be carefully considered.

A later speaker turned to him and said, with obvious affection, “I’ll be at your wedding, and so will most of those present here.”  Another gay member, Patrick Harvie, representing the Green Party from Glasgow, pointed out that most weddings in Scotland are now secular, and to the argument that there might be negative consequences to gay marriage, Marco Biagi, a third gay MSP announced, “the only consequence of this law will be that gays and lesbians will now be able to marry and hopefully live happily ever after.”    He made additional comments about an aunt being able to buy a new hat, but unfortunately, that site has since been taken down and I can’t quote him exactly.  I believe there is a fourth out gay member currently in Joe FitzPatrick, if I am not mistaken.

You can read a blow-by-blow of the debate here.

I’m still trying to get all these changes to settle in that framework I have in my head on what is Scotland.  Homophobia was the order of the day among the Scots in my family as a child, and I
was squeezed so tightly into my closet that I was well into my 20s before coming out.   My direct contact with Scotland didn’t give me much hope of finding open-minded folk, initally.  On my first trip to Scotland, I went to stay with the family of a friend in Perth.  She had failed to warn me her mother and father were local members of the Moral Rearmament movement.  There was a German au pair girl staying with them and she was desperately homesick and delighted to discover I spoke German.   We were washing the dishes after a meal one night and the mother came in and asked us to stop laughing.  It was suggesting to the boys, she said, that we were up to no good.  After dinner at one point we put on a record of My Fair Lady, which was just out, and got scolded again for laughing at that song sung by Eliza Doolittle’s father, “With a little bit of luck”.  One shouldn’t laugh at such an immoral view of life, they told us.   By the time I reached Glasgow and its black sooted brick buildings, I had formed a view of Scotland as dour indeed.

On another trip to Scotland, many years later, I attended a wedding in a small town – Aberfoyle, possibly, but my memory fails me  – where the minister quoted from Ephesians:

That was only about fifteen years ago.

I’ve been to the Edinburgh Fringe Festival, but that didn’t persuade me Scotland is no longer the backwater I once pegged it as, unfortunately.  I simply shifted misconceptions around and made fringe the exception to a very staid norm.

But watching these men and women in Holyrood do their thing the last couple of days, I realized that my view of Scotland is in desperate need of updating.

What a wonderful thing is progress.

Key measures in the Scottish government's bill include: