To interpret or to ignore 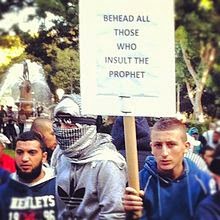 For a number of reasons, a group of radical Sunni Muslims currently headed by Abu Bakr al-Baghdadi have joined the civil war already going on in Syria.  They have intensified the struggle Al Qaeda was already engaged in to expel foreigners from the region, and taken the focus off of American and other Western enemies.  They are now concentrating on restoring the Caliphate and expanding it, initially through Syria and Iraq.  This changes the "enemy" primarily from military imperialists to all they consider non-believers, with a particular animosity directed against Shiite Muslims.  The result is there are two civil wars going on simultaneously.  One is about unseating Bashar al-Assad's government in Syria, and the other is to bring back the glory that was Islam and usher in Armageddon along the way .  These are primarily intra-Muslim struggles, and of interest to Europeans and Americans mostly because some 20,000 people from around the world have left to fight for ISIS, including 3400 Westerners at last count, and one worries about whether they will take the battle back home with them if and when they come home.  Beyond that, we are burned out after Iraq and Afghanistan and most people in the West don’t want to fight any more over what is essentially Muslim territory.  If, outside of the neocons, they ever did.  I know that’s anything but the whole story, but I think that is more or less where we are at the moment.

Potential trouble from war returnees is not the only spillover concern.  The violence of ISIS has non-Muslims, ex-Muslims, and I imagine a whole lot of doubting Muslims as well, wondering if there is something inherent in Islam that leads to this fascination with violence and martyrdom.  It’s the martyrdom part, the fascination with death and with having a cause worth fighting to the death over, that is attracting people far and wide, just as fascism’s force was irresistible to many in the last century.  This question gets picked up in Europe, where a sufficient quantity of “undigestibles” – Muslim immigrants with widely divergent values from mainstream humanistic values held by most Europeans these days – are scapegoated.  In some cases the danger that accompanies the fear of these alien folk is real – consider the 550 Germans who have left to fight with ISIS, for example.  More often the racist fears lying just under the surface are not justified.  I’m talking about fears such as that evidenced by the fact Thilo Sarrazin’s book Deutschland schafft sich ab (Germany is doing away with itself) has become a best seller.  The book worries about Muslim immigrants pulling the IQ level down much in the same way Herrnstein and The Bell Curve worried that blacks were doing the same in the U.S.  And by the Pegida phenomenon, groups marching in German cities under the banner of “Patriotic Europeans against the Islamicization of the West” – where “islamicization” upon close inspection often turns out to be not much more than giving Muslims dispensations in school from eating non-halal meat.

Political leaders and others, including no small number of intelligent progressive folk, have rallied around the notion put forward by some scholars that one should draw a sharp distinction between Islam and Islamism, that one should respect the former as one respects all religions, and fight against the latter as an abuse of that religion, as one fights against abuse of all religions.  A typical voice in the German-speaking world espousing this view is the Viennese Muslim political scientist Farid Hafez, who insists the Islamism practiced by ISIS isn’t religion at all, but a political movement.

Others point out – and to me they are far more convincing – that it takes religion to draw the kind of fierce loyalty al-Baghdadi’s movement is generating from around the world, that one does not go off to fight in other people’s political struggles, but they do if it’s for religion.  And what are we to make of the fact that the very heart of the ISIS struggle is the imposition of the shariah as the law of the land and the restoration of the Caliphate?  A Southern Baptist and a Mormon and a Roman Catholic may each preach from their pulpits that the other two are not real Christians, but all three join forces to demand the "religious" (sic) right to withhold rights from gay people.  These differences of opinion shift according to the goals at hand.  But it's not either/or.  There is no doubt we're talking about religion as well as practical politics.

CAIR, the Council on American Islamic Relations, under its leader Nihal Awad, announced last September that 126 Muslim scholars had sent off a letter to al-Baghdadi,  with some very powerful arguments on how he was badly misinterpreting the Qur’an, complete with chapter and verse.  Al-Baghdadi, as far as I know, never responded and I’m pretty sure he has his reasons for not taking those arguments seriously – Islam is at war, for example, so most of the constraints Awad and the other scholars are urging presumably don’t apply.

I’m pretty sure that while Farid Hafez’s signature is not among the 126 Muslim signatories to the letter (more have been added since), he would acknowledge these men as religious leaders.  But note that the tone of the letter is “one Muslim to another” urging al-Baghdadi to reconsider the Qur’an’s dictates from a broader perspective and pointing out allegedly overlooked passages.  So much for the contention that the ISIS movement is only politics, and not religion.

This takes us to the next question, whether one can fight one group of people who quote from the Qur’an with another group who also quote from the Qur’an.  The only thing this accomplishes is to make an even stronger endorsement of the Qur’an as the arbiter of all things that matter – not constitutions, not individual consciences.  Both share common ground, the view that submission is the only method for arriving at the truth.  We are back at the arguments made by those who see Islam as fascist – fascist being defined in particular here as making claims to exclusive and infallible authority.

I have danced around the question of whether stressing the point that there is something foul in the state of Islam is maybe a terribly unwise approach to fixing things.  It looks like friendly fire,  like a divide-and-conquer-your-own-guys strategy.  Since the ultimate goal should be to do two things simultaneously – look out for the rights of Muslim people, protect them against ISIS and against racists and xenophobes in countries to which they have emigrated – and get at the motivations of ISIS fighters and root them out, why are we stopping along the way to say nasty things about Islam?  Why are we fighting on two fronts here?  Why not just say, as Obama and the political leaders of Europe, are all saying, “Islam is a fine thing.  It’s the misuse of Islam that is the problem." And we know who uses it correctly and who doesn’t.  The people who ignore the violent passages and stress peace are using it correctly, and those who cite the violent passages are abusing it. That’s not factually correct, but it’s a pragmatic approach, because when you say that you do not have to face the ire of countless numbers of Muslims who, when it comes to their faith, take a "don't give me no bad news" approach.

You know what this reminds me of?  Back in the day when it was perfectly acceptable to say out loud anywhere that gays and lesbians were defective people, LGBT people had to set realistic goals and beg for tolerance.  Later, when some gay people wanted to marry, many gay activists, including Barney Frank, the leading political figure fighting for gay rights, urged us to move slowly and not ask for too much at once.  Ask for domestic partnerships.  Later, he/they said, we will ask for equal rights.

I think that’s what’s going on here.  It’s simply too much to ask to get people to take a close look at organized religion and see it naked, with all its warts.  Better to put lipstick on the pig, enter her in the beauty contest, and concentrate on providing excellent wine and cheese (or hot dogs and beer, depending on who you're partying with) for people to remember the day by.  Patience.  You’ve got to have patience.

Maybe so.  I’m not going to fight to the death for the idea that we expose Islam as a fascist ideology – and demand that we stop pretending that we’re all simply interpreting the Scriptures differently and admit that what we’re after is to get people to ignore the Scriptures.  That’s what I would really like to see happen, but I admit that probably in this case the politicians and other pragmatic people have a point.

Better to dissemble.  Wait.  Hold your tongue.  It will serve you better in the long run.

Labels: Islam in Germany and Austria