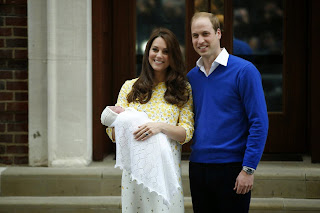 “What’s in a name,” the question goes.  That question Juliet asks when she ponders the consequences of the feud between the Capulets and the Montagues.  All the fuss over the name of the new princess, fourth in line to the British throne.  Sneer, sneer.  Gets my republican shackles up.  Who gives a damn, says I.

And then I read this little girl is going to be called Charlotte, and I am charmed.  Turn into a sentimental old man and say to myself, “What a lovely name.  Oh, I’m so glad.”

Where the hell did that come from?  What is it about some of us who get caught up in the British Royal Family.  Us colonials, no less.  Why should we care?

But it’s a little girl.  A baby.  What’s not to love about a baby?  Why shouldn’t you care about a new-born baby?

Next thing I know, I’m staring at the pictures of Charlotte’s mum.  Kate.  Beautiful woman.  And she is looking terribly happy.  And the lunk standing next to her too.  Prince William, who just a few short years ago was the bachelor to die for.  Super handsome.  Today he’s losing his hair, is beginning to show some royal jowls, not at all the movie star type.  Beginning to look real ordinary.  And then I think, well isn’t that special.  I’m looking at the heir to the throne and feeling good that he is looking ordinary.  And happy.  And I’m feeling happy for them.  Good on’em.  So if they drain the British treasury to look regal.  Doesn’t mean I can’t be charmed by baby Charlotte.  (Of course, I don’t pay British taxes.)

Charlotte is common in France and in English-speaking countries, but I think of it as a German name.  It was Sophia Charlotte of Hannover, Frederick the Great’s grams that Charlottenburg was named after, my favorite area in Berlin, the area where my friends live and I got to know up close and personal when I house-sat for six weeks a couple years ago.  My Aunt Frieda had a companion she called “Lottchen” which is short for Charlotte.  I’m guessing the name stuck in Prussian heritage places like Brandenburg and Berlin.  I seem to remember meeting lots of Charlottes.  “Charly” for short.  Or Lottie or Lotte, as in Lotte Lenya.

I’m rambling on about the name, looking for a reason to justify the pleasure I felt when reading of the new smile-maker of the kingdom who will carry that name.  Charlotte Elizabeth Diana. Covers all the bases.  Both paternal grandparents, Charles and Diana, and her great-grandmother Elizabeth (note the proper order, if you please.) That’s Elizabeth Regina, ruling monarch, of course.  And, speaking of connections, Regina is one of the names of the little girl born yesterday to one of my chosen family nephews – Hailey Regina. The Regina comes from her mother's sister, not the Queen of England. She’s not in line for any throne that I know of.  But thinking of her makes me smile, too.

Ah, the power of new-born babies.  Welcome to the world, little girls born in May.  May you both live long and prosper.

Smiles are the best medicine. Visit my site for more information and have a good day. Cheers.

I really love your blog there's a lot to share. Keep it up.Visit my site too.

After I initially commented I clicked the -Notify me when new comments are added- checkbox and now each time a remark is added I get four emails with the identical comment. Is there any manner you may take away me from that service? Thanks! casino blackjack