On falling down and getting up

A friend just sent me a link to the news in this morning’s paper that Kevin Wallin has been sentenced to five years and five months in jail for being a meth dealer.

Meth dealers go to jail all the time, so this would hardly be news but for the fact that this 63-year old man from Bridgeport, Connecticut was a priest.  The papers are referring to him as “Monsignor Meth.”  He was also an addict, himself.  And a cross-dressing party-loving man known for his love of Broadway musicals.  And apparently a capable secretary to two bishops, and described by his own colleagues as a "gifted, compassionate and accomplished priest."

I know only what I read in the papers, of course, and am not in a position to judge the man, even if I wanted to – I don’t.  But this man appears to have two characteristics which, in the long run, were bound to cause his downfall.  He was able to live a double life like some character out of Breaking Bad.  And he lacked the strength of character to ride out some serious financial challenges.  The Catholic Church is up against a loss of membership, for reasons that remain speculative.  But it is also suffering from the collapse of the financial markets in 2008.  Wallin was a fundraiser and this hit him hard.  So he turned to drugs.

My first response to the news story of his sentencing was Schadenfreude.  Every example of hypocrisy in the Catholic Church brings out the “sock it to’em” impulse that lurks in some corner of my mind.  Try as I may to separate the good that is in the church from the bad, there is a part of me which is still a church basher, so intense is the loathing I have built up over the years over the church’s efforts to keep women dependent on men and to guilt gays and lesbians into a life of sexual denial and indignity.  And, more recently, its willingness to throw its weight behind Republican causes, closing its eyes to how often it represents the interests of the moneyed classes at the expense of the rest of us.

Stories like this one keep popping up.  Inevitably, I am reminded of the claims of people like David Berger, that up to half of the priesthood is made up of homosexually inclined men, most of whom live lives of denial, and many of whom channel their resentment into sexual aggression and project their self-loathing into ardent support for its anti-gay policies.  Nothing is more characteristic of the Roman Catholic Church (and they are not alone in this among Christian groups, obviously) than repressed sexuality.  The consequences of that mindset have been deadly.  Over and over, again and again, opportunities for healthy growth are denied as the alleged virtues of sexual denial and suppression are touted as the will of God.

This story captured my attention this morning because I had been discussing the ramifications of the Pew Research Group report the past couple of days  on how many people are falling away from organized religion in America.  I celebrate this fact, but at the same time I realize this spells heartbreak for religious friends and members of my family.

It’s an old old story, and things are not likely to change, no matter how many more cases like this one will come to our attention.  People with messed up sexualities find their way into the church, hide behind the rule of celibacy without recognizing the long-term cost of denial.  The moral code some Christians claim is the strongest selling-point for being Christian in the first place - (“Without the church, what would keep us all from killing each other!?”) – has been twisted.  Instead of focusing on the virtues of compassion and generosity and love and forgiveness, the church has made morality all about sex.  About not touching yourself down there.  About not having sex unless you are generating future souls.  About constructing a society that argues it is protecting women when it is more interested in controlling them and keeping them dependent on men. 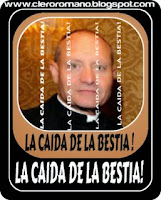 Kevin Wallin is easy to ridicule.  A priest wearing a dress and high heels.  Singing and dancing to Broadway show tunes.  What a clown.  What a joke.  What an obscenity.  Let’s laugh and make fun of this hypocrite.  This weakling.  One Spanish-language blog even describes his fall as "La caída de la bestia" - the fall of the beast.

In the long run, you will take sides on the basis of your own personal and political philosophy.  Do you tend to form your own sense of morality by moving from the individual to the collective?  Or the other way around?  Are you a law and order type who believes the individual must, in most cases, surrender to the good of the collective?  Or are you a staunch individualist who believes one of the great aspects of the American political system is having a Supreme Court that judges cases on the basis of the rights of the individual, and overturns the will of the majority on occasion, when they judge the individual to have been wronged?  I’m oversimplifying greatly, obviously, to make a point.

But I’ve reached my own penchant for stressing individual rights over collective ones because I’ve been on the business end of abusive laws and customs of a tyrannical, unjust, and ungenerous majority.

This is a philosophical issue.  Do you blame Kevin?  Stress his personal weakness?  Focus on the harm he has caused himself and other victims of drug addiction?  Kevin Wallin is easy to demonize.
It's easy to frame this story as being about a man who has sinned and who has to pick himself up, make restitution, get right with the Lord again.


Or do you focus on the misguided institution to which he has devoted his life?  Apparently he is seeking forgiveness and seeking to reenter the church as a member in good standing.  If he is reinstated – and I think he will be – his contrition appears to be genuine – it will be because he acknowledges his wrongdoing and throws himself on the mercy of the institution.  He may then go back to denying his sexual nature and live a life of celibacy.

If he pays that price, the church will have won out.  And the harm that generated the worldview that brought him down will continue.

And that will be a great pity.