God is not an American

It's painful to have to watch how the right manipulates the religiously fearful.  A dear member of my family who identifies as a born-again Christian likes to post messages on her Face Book page which support her religious views.  The fact that I do not share her beliefs is neither here nor there.  I'm with Thomas Jefferson and the argument he made in his book, Notes on the State of Virginia, that

it does me no injury for my neighbor to say there are twenty gods, or no god. It neither picks my pocket nor breaks my leg.

But I am bothered by the kind of misinformation the religious right flings around with great abandon, and I decided I had to respond to this young lady a couple generations removed from me when she urged me to listen to and pass on a song by the Christian country music group Diamond Rio called In God We Still Trust.  Nice music, if you like rock country and messages where religion and jingoism get smooshed together.    She spoke of it as “the song most radio stations are banning in the USA.”  She didn't indicate, however, how she learned that the song is actually being “banned,” so I decided to check it out.  Sure enough, snopes.com has the scoop here.  It was never banned; it simply never made the cut.

The remainder of this post is a selection of my response to her:

...There’s a world of difference between choosing not to play a song and banning it.

... But there’s another issue at stake here, which has to do with this wonderful thing we have in America called the freedom of religion.

at some of the lines of the song in question:


It’s quite evident this song was written by somebody who buys into the ideology that this is a Christian nation founded by Christian people for Christian people – and by “Christian” they mean their own brand of fundamentalism of the American variety – not the Greek or Serbian or Armenian or Coptic or Russian or Roman Catholic churches.  Not the Mormons.  Not the Unitarians, who deny the Trinity.  Not the many Christian denominations that deny the divinity of Jesus.  Not even mainstream Episcopalians, Lutherans, Quakers, or other denominations.

There is a terrible irony in that misunderstanding.  The religious freedom clause of the Constitution was put there by people who knew how divisive religion could be.  They were intimately familiar with the centuries of religious wars in Europe and wanted to cut the potential for a continuance of such conflict from the start in America.  The only way to do that, they understood, was to give no religion precedence over others and no state support to any religion, including religion proper.  Only by this hands off policy, they understood, could we hope to have free and uninhibited practice of religion for all time in America.  There will never be a law telling you you cannot pray – to any god, or any understanding of a God.  You will always be free to worship and share your beliefs with others.

The price of that freedom is that others must have the same freedom.  They must be free from pressure or intimidation by you to believe as you do instead of following the directives of their own hearts and conscience, misguided though you think they might be.

The reason we do not allow prayer in schools is that kids who choose not to pray will be set apart, made to be seen as a minority of “outsiders.”  This should not happen to any American child.  A Jewish child learns from his religious tradition that the Christians are mistaken in thinking that Jesus is the Messiah.  According to the Jews, the Messiah has not yet appeared.  When you pray, you customarily end your prayers “in Jesus’ name.”  That puts your religion up against a Jew’s religion. And this applies as well to Muslims, Hindus, Buddhists, and members of all the other non-Christian religious groups to which Americans are free to belong.  It makes an “in” religion and gives it precedence, and leaves non-Christians at the back of the bus, outsiders, “non-standard” Americans.  The Supreme Court has found such action to be unconstitutional, and even without the dictates of the Constitution, non-Christians deserve our respect and consideration as fellow-Americans, don't you think?

Right-wing Christian groups have made an issue of this.  As the song says, “there are those among us who want to push him out.”  Think about that.  It’s not true.  Nobody is pushing God out of the classroom.  Nobody is prohibiting prayer in the classroom.  As some wise person once pointed out every time there is a test there is a whole lot of prayer going on in America’s classrooms.  What isn't happening is the prioritizing of one group’s religious practices over another’s.

“From the schoolhouse to the courthouse they’re silencing his word,” the song goes.  Well, no.  They are not silencing his word.  Bibles are being published by the millions.  Gideon keeps putting them in hotel rooms, every library and bookstore in America has the bible available, both the Mormons and Bibles for America.org will send you a free bible in the mail.  Nobody is “silencing” his word.  They are making a place in the public arena – public schools are public places, remember – where people who associate the Bible with mischief or foolishness, or who simply find it irrelevant to their lives, do not have to be expected to treat it as a holy book.  One person's "freedom to" is another person's "freedom from."

When I went to work for the United Nations in Saudi Arabia back in the 1970s, I was visited by a member of the U.S. Embassy who invited me to come over on Sundays for one of two “meetings.”  There was Meeting C and Meeting P.  In Saudi Arabia, it was against the law to have religious services that were not Muslim, so there are no churches in Saudi Arabia, and the American Embassy, in deference to Saudi sensibilities, doesn’t use the word “church services” or “mass” to refer to what goes on in “Meeting C” and “Meeting P.”

Compare that with what you see in any city or town in America – row after row of churches, often side-by-side with mosques and synagogues and Buddhist and Hindu temples.  We have freedom of religion.  It is total, and absolute.  But so is the right of all Americans not to be pressured by another person’s religion.  That’s what is meant when we have “moments of silence” instead of public prayers in schools.  We have moments for the free exercise of religion.

When Diamond Rio sings “there’s no separation – we’re one nation under him” they are showing their ignorance of history.  There most assuredly is separation of church and state in America, despite the efforts of some groups to impose their religious view on everybody.

Look it up.  You will find all sorts of comments by the founding fathers that show they had no intention of making this a country run by the churches.  You put your hand on the Bible (or not, if you prefer not to) and swear to uphold the Constitution.  Nobody swears by the Constitution to support the Bible.  Those who in colonial days did believe in an invisible extraterrestrial Creator were likely to be Deists, people who believed God set the world in motion and it was now up to us.  They saw nothing to be gained by prayer, since God worked through the laws of nature and it was a waste of time to ask him to put those laws aside.

Without going into a whole history lesson on the founders of the American democratic experiment, just look at this page I also found on Face Book this morning: 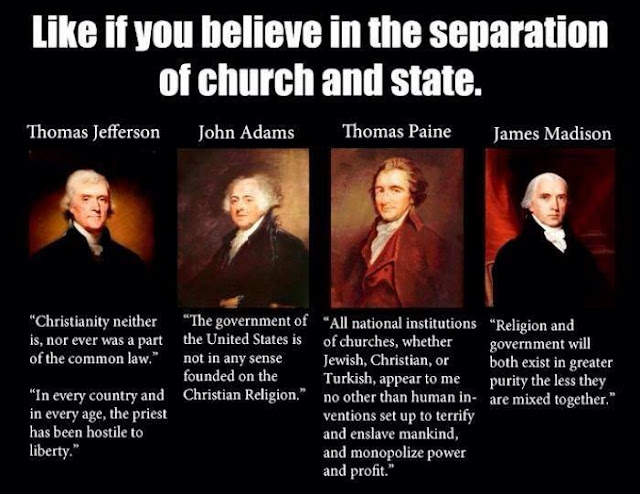 If you want to check out the sources of these quotations, they are easily found.  Just type in the words in Google and they will lead you to the sources.  The second panel, featuring John Adams, our second president, is particularly apt.  It is from the Treaty of Tripoli.  You might also enjoy the larger context on religious freedom in which the Madison quote is to be found here.

My point in saying all this is that I hope you will not fall prey to those who are fanning the flames of resentment and paranoia by trying to generate a fear that Christians are under attack in this country.  Nothing could be further from the truth.

The people this song is demonizing are not your enemies.  They are good Americans trying their best to assure that all Americans are free from religious persecution and intimidation.  Don’t be misled when the fans of Diamond Rio rise up to cheer when they sing their song.  People have always been misled by those who play on their fears.  Use your critical faculties.  Ask yourself why these videos (and so many megachurches, for that matter) appeal to your patriotism and your inclination to feel grateful to soldiers who die in America's wars.  Why they almost inevitably mix together the Statue of Liberty, the American Eagle and the Cross - the protestant one, please note, not the crucifix.  Get informed.  Stay informed.  God is not an American.  And you are not a lemming.