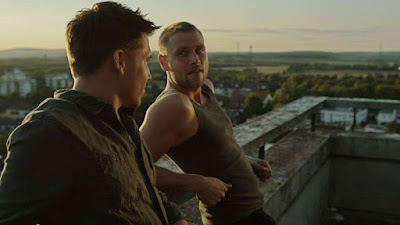 Free Fall (Freier Fall) is a German film about two policemen whose sexual attraction for each other leads to their ruin.   Marc (Hanno Koffler) and his girlfriend are about to have a baby.  He is given the responsibility to look after Kay (Max Riemelt), the new guy on the team.  They become jogging buddies, and one thing leads to another.  Kay lives a bit on the edge, is into drugs and parties.  Marc has apparently never been aware of any same-sex feelings before, but can’t resist Kay’s charms.

What follows is predictable.  Bettina, Marc’s girlfriend, realizes something is going on and takes off with their newborn when she finds out.  When the policemen discover not one but two gay men in their presence, their homophobia leads to physical violence.  The image is of small town bigotry and retrograde values.  Berlin, Munich, Hamburg or Cologne this is not.  (Actually, it’s Ludwigsberg, just north of Stuttgart, if the license plates are any indication.)

The facts of the story might have taken it in any number of directions.  If homosexuality were not portrayed as a demonic force in the eyes of Marc’s family and colleagues, it might have been about his immaturity, his failure to follow through what appears to have been a commitment to becoming a father.  He betrays his lover, Bettina, at the worst possible time, but the fact that his wandering eyes fall on a man and not another woman, in a more highly sexually liberated social setting, could have been made incidental, instead of the focus of his dilemma.  Instead, Kay becomes an evil force to be driven out of town, and what might well be a love story becomes a surrender to lust that has to be put behind them.

That’s not how a gay audience is going to view this film, of course.  For most gay people this is a gay love story plain and simple.  Trite as hell – gay people against a homophobic world – but worth watching because the two lead characters are so easy on the eyes.  Read the reviews and one after another you see references to the film as the German Brokeback Mountain.   A fan club has grown up on Face Book (in English here and in French here) urging a sequel in which the two men get back together.  A fiction club is at work writing just that story.   This story can’t end like this.  It has to have a happy ending, according to a great many American viewers.  Those damned Europeans and their unhappy or ambiguous endings!

The ending the movie actually carries is in fact not that bad, at least if you view Marc as the central character.  Kay leaves town, but Marc is older and wiser.  In the end you see him pulling himself together, internalizing Kay’s advice to “breathe regularly” when he jogs, and soaring out ahead of his teammates.  A new man.  We’ve seen him as a loving father to his new child, and imagine this will continue, and he will get back on good terms with Bettina, whom he is also obviously fond of.  But his bisexuality – or newfound homosexuality – will not be put back in the box.  It’s a story of a man living and learning.

How strongly you relate to this open-ended ending will probably determine how you rate the film.  It is overly long, which means it takes on the feel of a soap opera, at times.  Which is unfortunate, since the acting is powerful and convincing.  You find yourself rooting for the two men.  You definitely want them to find their way to each other.  Brokeback Mountain it is not.  That was tragedy; this is just a bump in the road.  And it’s fixable, remember.  Stay tuned.  You may want to log in to Kickstarter at some point and help the sequel along.  The point of all this, of course, is that when a filmmaker has his audience (including reviewers) arguing over how a film's characters should have behaved, it's clear they have crossed the line and forgotten they are watching fiction. Could a writer or a filmmaker ask for more?