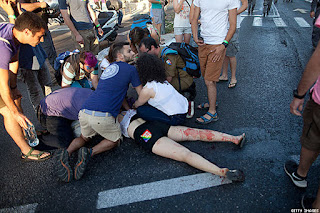 What a world we live in, I keep saying to myself.  I’m getting old and every day brings a new experience that makes me marvel at how the world is not the world I grew up in.  Not better, not worse.  Just different.

I found myself staring just now at the photos from Jerusalem  of the people involved in the stabbing by the fanatic fundamentalist who believed he was doing a good thing by sticking a knife into the bodies of gay people as they marched down the streets of his Holy City.  Maybe as a defense mechanism, so I wouldn’t cry, or so I wouldn’t throw things, I found myself marveling at the high quality of the photos.  Getty Images, it says in the bottom right corner.  Wow, I said.  Somebody took some really good pictures. 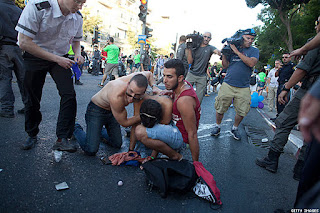 OK, so there is resistance.  Of course there is resistance.  The Abrahamic religions have it in their scriptures that there is something wrong with homosexuality and those who take those scriptures literally have to have this reaction, that in order to remain loyal to their faith they have to disparage gays and lesbians.  “It is written!”  We try to let religion off the hook, but there it is.  “It is written.”  This poor old man with the long scrawny beard, dressed in black from head to toe, this Yishai Shlissel will be dismissed by his own kind for going too far.  Killing is wrong, say the Haredi, Israel’s radical right religious folk.  You don’t kill people.

But Shlissel read the scriptures.  He knows “It is written!”  Seen from afar, this is just another example of social change, progressives looking to extend the rights of folk, conservatives cautioning against rapid change.  It just gets a little rough around the edges, that’s all. 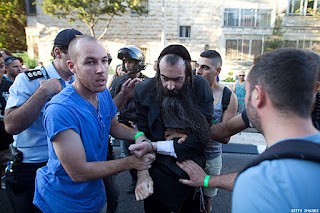 Israel is a place of such ironies, to me.  I have never been there.  Not sure I want to go anymore.  Wouldn’t go for religious reasons, and certainly not for political ones.  But it figures large in the lives of my Jewish friends and I’ve always had an interest.  It was born on my birthday, in 1948.  When Israel celebrates its birthday, I celebrate mine.  Silly little detail, but life is made up of such silly little details. 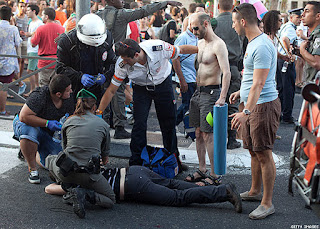 80% of Israelis are secular, as are most Jews around the world, I’m told.  It was son of Jewish immigrants Nobel Prize winner Steven Weinberg who uttered that quotable saying, “With or without religion, you would have good people doing good things and evil people doing evil things. But for good people to do evil things, that takes religion.”

Israel illustrated the aptness of that quotation today, just as it did when the ultra-orthodox killer of Yitzak Rabin shot Israel’s hope for the future down and set the possibility of negotiations back who knows how long, possibly decades.  Apparently the country will remain in the grip of religious fanatics for the foreseeable future.  They have control over the right to marry.  They keep this insane occupation of the West Bank and Gaza going.  They are a dangerous force. 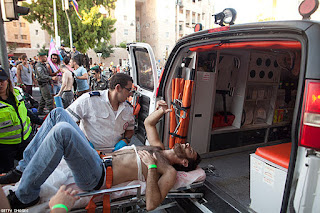 I blogged yesterday about the mistake I think we make when we confuse religion with its adherents.  A similar error of cognition is made when we confuse Israel with Jews.  I would hope that gay people, particularly at this time, recognize what an exception Yishai Shlissel is, both to Judaism and to Israel.  Reform Jews in America were one of the first religious organizations to embrace gay people and take them in without condemnation.  Not just tolerate them, but celebrate them.  It would be a tragedy to mistake the actions of a fanatic for the whole – even of the Haredi – although they are a very closed-minded bunch when it comes to gay liberation.  Women’s liberation.  Any compromise toward peace in the Middle East, for that matter.  I think it’s important, when events like this attack yesterday in Jerusalem take place, to remind ourselves that the whole consists of very diverse parts, and that generalizations are particularly self-defeating at this point. 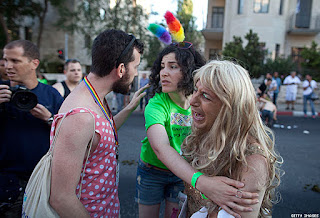 But there they are, those photos, chronicling yet another future shock event, the long hard struggle for gay liberation in far off places that turn out to be not so far off at all.   This is one of those times when we come to understand that “they” are “us.”   Good for you, Getty Images.  Good for you internet, that brings us an up-close look at the world beyond our doors.

I wish you a speedy recovery, you guys who got the worst of it.

Get better, and march again next year.   There’s still more work to do. 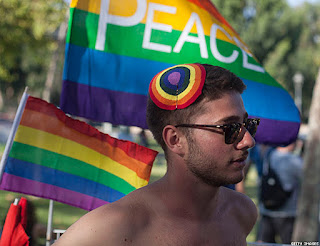 A note on the photos:  I have copied and pasted the photos into this blog entry without permission. They all come from a single article in today's Advocate magazine, whose authors I assume had permission to publish them from Getty Images.  If I have overstepped the bounds, I will immediately take them down and urge viewers to go to the original sources instead.  I hope that making it clear that I have no financial gain from passing them on here and that I credit the original sources is sufficient.

Alan, this is such a wonderful blog. Although I promised myself not to send out emails while in Berkeley I am sending your blog out.