I’ve finally finished going through several boxes of old photos, some of which I’ve schlepped around with me for fifty years.  Don’t know how I managed to hang onto them, since I went through several periods when I thought the best thing I could do was to simplify my life and shed all unnecessary accoutrements.  Like old memories.

It took me four days.  Three of those we had no dining table to eat on, because the photos were spread into fifty categories.  The drive across the country with “the good little boy” and “the bad little boy,” two students of mine whom I allowed to talk me into taking them with me.  Big mistake.  Pictures of students in Japan from the 1970s whose names I couldn’t recall on a bet but whose faces still bring a smile to my lips. And loads of family photos.  Loads of “before” (when our hearts were young and gay) and “after” (when our hearts were still gay, but what happened to the hair and is my belly really that big?).

My mother died young.  She had a heart attack at 60, in 1975, and died three days later because we were people who didn’t go to the doctor.  Take an aspirin.  You’ll be fine in the morning.  My father lived on until 2001, and I remember writing at the time he died that I was not going to mourn just yet, that there would be time, once his passing had sunk in.

Being able to see the course of one’s life laid out in photographs across the dining table gives you a sense not only of time but of connectedness.  I never mourned that much, but I did develop over time a much stronger awareness of what a good man my father was and how glad I am that we are connected.  I come from a particular place.  I have an inherited set of identities.  I can now go back in time and see how those identities were formed, point by point, or I can stand back and wonder at the trajectory, and the realization that those of us in these photos saw none of it coming and that it’s hard not to see life as one long drawn-out curious accident.  Not train wreck accident, although there were some difficult moments, but accidental chain of events in that they all now seem so terribly arbitrary.

I wonder if people living in the digital age, people who don’t take photos and stuff them in cardboard boxes, aren't missing out on something. Will you pull out a digital photo a half century from now and take note of the little things?  I mentioned earlier that I was fascinated by the fact that in a photo from the first of many many summers we spent with my father's Aunt Carrie and Uncle Charlie (pictured) in Nova Scotia, my father had his arm around me.  I lived with the notion that my father was not one for affection.  But there it is.  His hand on my arm.


Then there is the announcement in the Torrington Register in October of 1938 about a young lady named Clara Louise Gundelach, who was employed “at the Standard Plant,” i.e., that she was a factory worker.  She was marrying a young man named John Stanley McCornick, who was employed as a clerk at Mubarek’s Grocery Store.  They were 23 and 22 years old, respectively.  Working class kids.  And yet, there’s my mother in a white satin gown complete with veil and long train, carrying a bouquet of white snapdragons.  The wedding was obviously a big deal, and the newspaper printed the names of all the guests who motored down from Massachusetts and up from Hartford.  Hartford is 28 miles away.  Belmont and Malden and Stoneham and North Quincy, Mass, are all of two hours’ drive.

And Walter O. Stoeckert played the organ.  Even the organist is mentioned, complete with middle initial.  The bridesmaid will also carry snapdragons, but she will be wearing ruby red satin and a silver turban on her head.  She would later marry the best man, my father’s older brother and I would come to know them as Uncle Tom and Aunt Elizabeth.  All these people are long gone, of course.  But I can see them in the church on that splendid red carpet.  And at the reception afterwards at the Germania Singing Society Hall, which the bride’s father (Vati) managed and where I used to have to sit in a chair and be quiet as the bride’s mother (Mutti) mopped the floors.  To this day, I can feel the rage filling my face and my lungs at having to sit and be quiet when I wanted to run free.  None of this is in the announcement, of course, because it would all come four or five years later, long after my mother and father left for their wedding trip through New England, she in a “fall outfit of brown with rust accessories.”

I was born two years later, and we still called St. Paul’s Lutheran Church the “German” church, so maybe I shouldn’t be surprised the wedding announcement identifies it as “St. Paul’s German Lutheran Church.”  After all, the town of some 25,000 souls had a Finnish and a Swedish Lutheran church as well.  And an Italian Catholic and an Irish Catholic and I don't know where the Poles and the French Canadians went.  Oh, and a Lebanese Maronite Catholic church, still running strong today.  The Lutherans combined and lost their old world identity over the years.  The Catholic churches, I think, still hold onto theirs.

Grossmutter, my mother’s birth mother, is not mentioned in the announcement.  I can only wonder what she was experiencing. And where she sat. She had given my mother up because, as a single mother in the middle of a war in 1915, she decided her sister and brother-in-law, people everybody called “Mutti” and “Vati” could do a better job of it.  Grossmutter went and got a job as a stewardess on the Hamburg-Amerika Line and only saw my mother again twelve years later when she jumped ship in New York and came to Connecticut and reclaimed her.  But I see from this wedding announcement that my mother still had the Gundelach name (Vati’s name) when she married and it was apparently Vati who gave her away.  Who else?  He was, in fact, her adoptive father.

What they all made of this emotionally was never passed on to me.  I saw only harmony all around.  They were all remarkably close, and perhaps they did manage to put aside the pangs of regret and the misgivings that must have plagued them.  Or am I just projecting from a point in the future when we no longer feel constrained to sit on our feelings?

I tracked down the ship that brought the Gundelachs, Mutti, Vati and their son Paul, to America in 1928.  I never would have found them because in the Mormon records in Salt Lake City somebody had copied their name off the ship's manifest wrong.  They hit the "s" key next to the "a" key and typed in "Gundelsch."   It was by pure chance I was able to find them.  “What if my mother was still traveling under her birth name?” I asked, after exhausting all other possibilities.  And she was.  There is was, big and bold, Clara Schultheis, travelling with Paul and Johanne Gundelach.  She was not officially their daughter, in other words, but their niece.  The adoption must have taken place in America.  But when?  Without my grandmother’s permission?  I thought I had answered all these questions, but just looking at this wedding announcement, I realize there are many more.

Like why, for example, did my grandmother have photographs of my Uncle Willi and my Uncle Kurt, whom my mother never knew, two sons my mother’s birth father had from a second wife.  Did they stay in contact?  They must have.  My grandmother insisted I meet Willi when I was a student in Munich, in 1960.

Here’s Kurt and Willi, in their German uniforms in World War II.  I kept this photo hidden when I applied for the Army Security Agency two years later.  Even then it was touch and go, since any German connection at all was still suspicious.  One look at those uniforms, and I would never have made it to Berlin to spy on the Russians - and later the East Germans. 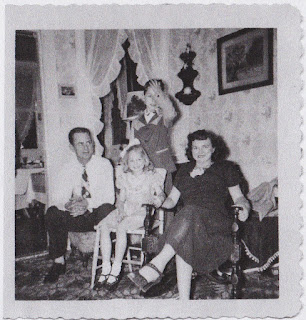 Here’s another photo of my mother and father and my sister Karen, who came five years after me, and me, taken at Mutti’s house, where I failed to pat my hair down in time for the photo.  I love the fact that nobody thought to throw this photo away.  In it went, with all the others, chronicling the march of time.  And here's one of me with Karen and her husband Joe, and my father, in the last year of his life, no longer looking all that chipper.  We don’t always march with time.  Sometimes we have to roll through it in a chair. 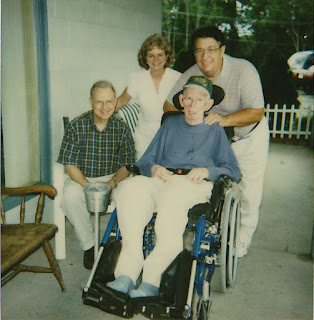 I found the photo I was looking for – of an old friend from college days I managed to locate on Face Book after fifty-four years.  And the rest of my photos got organized in the process.  Four days out of my life.

But four of the best days I’ve spent in ages.