Love me, love my dog

I was giving our girls their usual evening constitutional last night when my heart lept into my mouth.  A black cocker spaniel raced right by us and into the street, straight into the path of an oncoming car.  Fortunately, the driver had his wits about him and slammed on the brakes.

Just then a couple very good souls, a woman and her daughter who live around the corner from us, shouted out, “Is that your dog?”  “No,” I said, and we stopped to piece together what had just happened.  A homeless man had asked the woman to take care of this dog which had attached himself to him.  “I don’t have a home,” he said, “and I can’t take care for him.”

A beautiful little thing, with black curly hair.  Clearly shaken by his near-miss and with all the strangers suddenly focused on him.  Jennifer, the woman’s name was, took the dog home for the night.  My girls' other daddy and I brought over some dog food and sympathy.

This morning Jennifer had the dog checked out.  No identifying microchip, no collar, and the dog had not been neutered.  Surprising, since the dog looked well cared for.

Although they are cat people, they took the dog in and calmed him down.  And later this morning they took him to the shelter, where for some reason he perked up.  “That guy’s young, and he’s gorgeous,” said the intake person.  “We’ll have no trouble getting him adopted.” 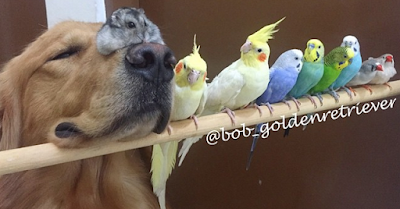 So, so far, at least, the story has taken a nice turn, and I get to feel extra good about my neighborhood - a place where you find kindly people, including a careful driver who then suggested the dog might like his candy bar.  Funny how people’s first thought with animals is to feed them.  We suggested perhaps there might be nuts or chocolate or something not good for the dog in there – and that’s why I made a point of bringing round some dog food.  But the naivete of it all warmed my heart.  Three strangers – I’m counting mother and daughter as a unit – suddenly brought together by fate and an opportunity to embrace a lost soul in need of some warmth and protection.

So often you get to see hostility out there outside your front door.  This was a sign that things sometimes go right.

If you’re from around here and know somebody who might make a home for the little guy, contact the Berkeley Animal Shelter and tell them you’re in the market for a cocker spaniel – Jennifer thinks there may be some dachshund in him, as well.

In need of some regular lovin’.

And if you are thinking how curious it is that strangers will come together to take care of a dog while a homeless man is left to shuffle off on his own, I'll tell you I think your point is well taken. Forgive me, though, if the answer is that the dog seemed more vulnerable.  And OK, a whole lot cuter.  And because I can't save everybody doesn't mean I can't try to help living creatures ranked on the basis of how much I would enjoy sleeping with them.

The first photo is of the little black cocker spaniel in question, taken from a neighborhood chat site. Jennifer is trying all she can to find the owner.  The second photo comes from: http://petfilm.biz/?p=25715 - and has nothing to do with this story. It's just that I figure if you've read your way this far through this blog posting you're probably the kind of person who needs no explanation for why I would post it.

A big yeah for the people of your neighborhood! And please post more photos of those cuties, related or otherwise.

Update, Saturday afternoon, July 11th. Jennifer reports she spoke with the shelter staff this morning was told this little guy had been given the name "Derby," after the street where we found him. They assured her Derby was in "no danger of euthanasia." He now has an ID #: A036484. They want to give him a few days to socialize and calm down a bit, and play with the other dogs at the shelter. Derby will then be available for adoption next Friday, July 17. Anyone interested in adopting him should be there as close as possible to opening at 10 a.m., with proof that they have their own home or are allowed to have a dog if they rent. Adoption fee is $125. Please call (510) 981-6600 for more information.

No owner was found, but he has been adopted by a conscientious couple (according to the shelter) who took several days to prep their home before bringing him home. I understand one of them has a workplace that welcomes dogs, so he will not have to be alone during the days. Happy ending. :-)