Not all doors open on the left

An autoclave, I understand, is a pressure chamber for sterilizing things.  Like surgical equipment.  You use steam, and once you’ve sterilized dental equipment, say, you can seal the instruments in air-tight packaging and they will remain sterile for about a year.  Great invention.  Another thing you can do with an autoclave – don’t ask me how – is aerate concrete, making it porous and lightweight and easier to manage than normal concrete.  You can make building blocks with it, for example, which can easily be cut up into the shapes you need.  Imagine.  A cinder block you can cut with a saw.

Once you’ve manufactured some “autoclaved aerated concrete” (AAC), the uses are unlimited.  You can wall off a room, for example, or use it for construction in high-rises, where its light weight is a distinct advantage.  Its high porosity makes it useful as a fire retardant.  It also gives it a high thermal efficiency, making it a good insulator.  You can also wall up a subway door with AAC, if you choose. 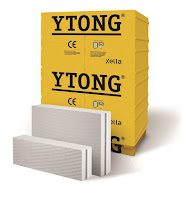 Just as many people use the brand name “Kleenex” as a generic name for paper tissues, AAC is often called Y-tong.  Y-tong is the world’s largest manufacturer of AAC.   Here’s an ad in Greek, for example.  And if you’d like to see how you build a wall with Y-tong, here’s a link.  Scroll down to the how-to video. The instructions are in Dutch, but the visuals are good, so don't let that phase you.

Did you know that the smartest people in Germany live in Hamburg?  That’s not quite right.  What I mean is somebody decided to test the IQ levels of people in 22 cities in Germany and the Hamburgers came out on top.   They apparently have an IQ of 124 on average, way ahead, say, of Frankfurt (113) or Munich (112), leaving Wiesbaden and Wuppertal (104) in the dust.  Men are smarter than women, also, according to this report.  They come in at 107 compared to women at 105.  Unspoken, of course, is the fact that 100 is supposed to be the average IQ.  I guess Germans are just a little smarter than the rest of the world.  On average.

Now you may be wondering how I’m going to put these two facts together, the fact that there is this marvelous invention called AAC, aka Y-tong, and the fact that people in Hamburg are particularly smart.

I won’t keep you in suspense.

The pictures above show a subway train on the S-11 line in Hamburg where some enterprising young folk have sealed up a door with these cinder blocks.

OK, so this isn’t cool.  It will cost the city tens of thousands of euros to take down the wall and repair the damage, according to one news item.  But that can't be.  Really?  Ten of thousands?  If that's true, somebody in city government is getting a little off the top, I should imagine.

The best part of the story is that the construction job was done with great German precision.  The blocks were pre-measured and fit perfectly into the space.  The signals that tell you when the door is open were shut down so it took the driver of the train an hour and a half to even discover there was a problem.  All done in the dark of night last Tuesday before the trains were started up to make their daily rounds.

See what happens when you give people too much intelligence?  Eat your heart out, you Wiesbadener and Wuppertaler.