My mother was born in Celle, not far from Hannover, in Lower Saxony, in Northern Germany.  I was there only once, to visit a great aunt and uncle over Christmas, in 1960.  It was awkward.  I took right away to my great aunt Marie, my grandmother’s younger sister.  Onkel Fritz, her husband, was hard for this twenty-year-old from America.  It was only fifteen years after war’s end, and they still lived by the habits they had acquired in the dark days.  We were not allowed to turn on any lights until it got real dark.  Onkel Fritz would sit by the window with his newspaper, lifting it closer and closer to the glass as the sun went down, to get the very last of the natural light before we were able to turn on a single lamp.  I wouldn’t be surprised if the bulb were no more than fifteen watts.

There were several strained moments.  “You Americans write “I” with a capital letter.  We Germans write “you” with a capital letter and "I" with a small letter.  That says a lot about our putting others first and your need to feed your ego.”  Not the exact words, but close enough.  I wanted to bop him one, but I was only twenty and on my best behavior.   Wish I could say I also finessed the goose fat soup challenge, but there I failed miserably.  When Tante Marie set a bowl of goose fat soup in front of me, I took one sip and thought I was going to retch.  I put my spoon down and apologized.  “I’m sorry.  I can’t eat this.”  “If you had gone through the war, and known hardship, you’d be glad to have a little fat to eat.  There were times when we thought we were going to have to eat grass.”

They were decent people and the family connection was enough to make me overlook the culture gap.  I don’t remember how long I stayed.  Two or three nights, anyway.  I was in Celle long enough to get the lay of the land and to meet cousin Annemarie, who was married to a borderguard on the Dutch border and to walk the streets I assumed my mother knew as a child, before I realized she was actually raised in Braunschweig, because my grandmother had given her to her other sister, Johanne, to raise, because Johanne and her husband, whom I grew up with and called Mutti and Vati, lived on a farm and they at least had enough to eat before hightailing it for the Promised Land called Connecticut.  Cousin Annemarie gave me a book about Celle published in 1940 and written in Fraktur, the old Gothic script that goes back to the 15th century and in use until the end of the war.  More reminders of wartime.  I just missed Hitler by fifteen years, I thought to myself.  Thank God my mother and her mother both left (separately) in the 20s, or this is where I might be today.

Unlike many, including my mother,  who was only eight when she left the old country, and unlike her sister Johanne, my Grandmother kept close ties and went back to Germany six times over the years, always by long sea voyages.  When I was leaving for New York in the late summer of 1960 to catch the boat to Germany for the first time, I came upon my grandmother crying.  I had only seen her cry once before.  That first time I asked her what the matter was and she said, “I miss my mother.”  Her mother had died fifty years earlier and this made no sense to a teenager, so I just thought at the time she was weird.  This time I assumed it was because I was leaving for a year.  “Don’t cry,” I said to her.  “I’ll be back in no time.  A year will go by fast.”

“I don’t mean an accident.  I trust God will take care of you.  I’m just thinking that I left my home in Germany when I was only sixteen years old and came to America alone and made a home here.  But I was always homesick for Germany.  So I often went back.  And the whole time I was in Germany I was homesick for my loved ones in America.  I see that in your future.  Living on one continent and homesick for the other.  It’s a hell of a way to go through life.”

She didn’t say “hell of a way.”  She didn’t talk like that.  But that was her meaning.  And I’ve thought my whole life long how right she was, whether I was living in Berlin, or Tokyo, or the West Coast of the U.S.  I expanded the two-continent dilemma to three, and there was always a sense no matter where I was that I had left a part of me behind.  This has been mitigated in recent years, now that we can hop a plane anytime and fly ten or fifteen hours and turn around and fly back again a short time later.  All the years I lived in Japan I came home three times a year.  But in my grandmother's day, when one traveled by boat and it cost an arm and a leg, things were different.  My mother never saw Germany again, and for most of my American family of German origin, Germany might as well be Mars.  It is a faraway place, and plays no role in their lives.  Today, the idea of a both/and national identity is once again common, but the waves of immigrants who came in the early part of the 20th century from Europe pretty much cut their ties.  It was un-American not to.

My grandmother was an exception to that pattern and her fierce loyalty, not so much to the country, but to the culture, she passed on to me, and I am eternally grateful for the gift.

In sorting through old photos the past few days I’ve come across a number of treasures, which have let loose a flood of nostalgia, and no shortage of surprises.  One picture really blew me away.  It’s a picture of me standing next to my father.  He’s 31 years old and I’m 7.  And he’s got his hand on my arm.  That can’t be, I thought.  My father believed it was unmanly to show affection.  I forgot – or simply never focused on it – that this was not the case when I was small.

The Celle family, too, caught me by surprise.  I came across a postcard to my grandmother in  Connecticut, mailed from a small town called Dieckhorst, just east of Celle, near where my grandmother was born and grew up. It’s one of those wish-you-were-here kind of postcards whose sole purpose is what linguists call phatic communication.  Messages which are totally devoid of real information but are sent to remind one, “we’re here, we’re still your friend/family, and we still think of you from time to time.”

I stared at the card.  It was written in pencil and it was pretty faded.  Reading the Sutterlin script (the handwritten version of Fraktur) was hard.  “I’m here in Dieckhorst,” it says.  Letter to follow.  Love from Onkel Fritz.”  While I was working on who this uncle might be – it can’t be Marie’s husband Fritz.  I've got more than one Onkel Fritz - there is no shortage of Fritzes in Germany, obviously, but how am I to figure out which one this is - suddenly the stamp caught my eye.

Hindenburg!?  I'd know him anywhere.   I suddenly realized the card was written in 1946, but it’s got Hindenburg on the stamps!  Now how did that happen?  And there are the words, big and bold, “Deutsches Reich.”  I thought the “Deutsche Reich” became the Grossdeutsche Reich when Hindenburg turned the country over to Hitler.   Did it go back to "Deutsches Reich" in 1945?  I thought it went to "Occupied Germany" and then to the Bundesrepublik.  Shows you what I know. But what’s he doing on the stamp in 1946?

Obviously I am in need of a history lesson.  Sure enough, the “reich” continued on, even after the establishment of the Bundesrepublik and the two terms were used concurrently for a while.  How come I never knew that?

You can learn a lot rummaging around in boxes of old photos. 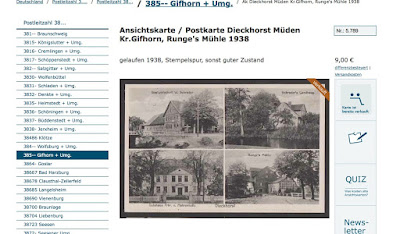 After a little shuffling around on the internet, I came up with this very same postcard, now for sale on the internet.  For 9 euros.  No way I'm going to give up my copy, obviously.  Not till I figure out which of my many Uncle Fritzes we're talking about here.

Dear Alan,
I had not realized, until reading this blog post, that you have Germanic roots! Furthermore, I am sensing, when reading between the lines, that you feel yourself to be a Citizen of the World in a similar same sense that I consider myself a Citizen of Europe! Had I but known when we met, two months ago, we would have had much more to talk about!
Yours sincerely
Emil