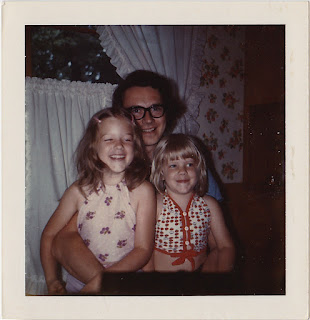 Just wrote a letter to one of my extended chosen family nieces.

She's the older sister in the photo.

Doesn't look like that anymore, now that she is potentially grandmother material.

She lives in the Bible Belt, bless her heart and soul, yet votes Democratic and has written a book on why she left the church.  Lots of strength of character here.

I’ve been following Face Book lately, and I noted your frustration when dealing with somebody down on Hillary Clinton.  You are a loyal and engaged Democrat and I share your sense of concern that the country could be thrown back again into the clutches of the Republicans.  An unmitigated disaster, in my view, given that Ruth Bader Ginsberg is likely to retire during the next administration and appointing yet another of the ilk of Scalia, Roberts, Alito or Thomas to the Supreme Court would mess us up even worse than we are now, with Citizens United and all power going to those who support the wealthy ruling class and corporate America over the rest of us.  I think you are right to worry Hillary might not get elected, assuming she is the only real person who might make it to the White House on the Democratic ticket.

I’m watching Bernie Sanders with fascination.  I can’t believe he’s doing so well.  What’s going on, and I think this is obvious, is that the left has been left out for so long that they can’t help but get a little optimism back, now with his candidacy, that the country might actually be able to correct its course.  And he speaks to the left in a way Hillary can’t.  She clearly represents the established middle.  (And from where I sit the “middle” is center-right, compared to the rest of the world’s democracies.)  She represents the wealthy.  Those who bailed out the too-big-to-fail banks and put a band-aid on rapacious corporate America, instead of fixing things.  We have not had anybody around who could actually fix things.  Ralph Nader was never somebody who could appeal to large numbers of people.  Bernie Sanders is much better, because he walks and talks like a politician and makes people think he might know how to work the system, if elected, unlike Nader.

I listened to an interesting interview with Cornel West recently in which he expressed the worry that in the end Bernie Sanders might throw his weight behind Hillary, instead of holding out to the bitter end for the interests of marginalized Americans.  That’s kind of where I am.  I’m not sure Bernie Sanders is a wunderkind or a savior.  I’m too convinced the system cannot be adequately dealt with by any single individual, that the only way America can right itself is for people to recognize how really bad off we are, how much we have surrendered to the imperialists among us, to the liars, the propaganda machines, those who defend torture and the hypocrites who run the show, both Democrats and Republicans.  Without a revolution in thinking, a revolt of people fed up who don’t want to take the lies anymore, I doubt any individual in the White House could make a difference.

People say those of us on the left are making a mistake running “against” Republicans, instead of “for” a clearly articulated program of progressive goals.  I agree that this isn’t the best way to go, but it’s the cards we have to play with at the moment.  Any democrat is likely to be better than any republican.  That’s overstated, but essentially how I feel.

If I were king of the world, I would get more people to listen to Noam Chomsky.  I know he drones on endlessly and refuses to engage in debate and discussion, preferring to see himself as the only one around who really understands things.  But he’s so good at pointing out the history that gets hidden, the facts that we should have on hand for making decisions.  I think if we listened more to people like Chomsky and Cornel West we’d begin to see Bernie Sanders for what he is, a reasonable man, and not a crackpot socialist.  We don’t get enough perspective.  We get people in the media who point our heads toward the centrists posing as progressives, those who make the fallacious argument that the truth always lies in the middle, rather than pointing out that when you are arguing with somebody who makes up his own facts, you’re arguing with a liar and the debate is rigged.  If we had a more knowledgeable citizenry, we would know more about what Chomsky and West are all about – never mind how much we may find their takes unbalanced at times.  We'd see the line between Bernie Sanders as a fair-minded man and Hillary Clinton as a tool of Wall Street.

I repeat, I will vote for the tool of Wall Street, because I still believe not to vote is a sign of incoherent thinking, of throwing the baby to the wolves instead of making them tear it out of your hands.

I wish you success.  And you know I’ve always thought you must be some kind of hero for enduring life in the Bible Belt, in any case, so please know that my admiration continues.

Of course. It's public information. Will you let me know where you put it? And who you are?