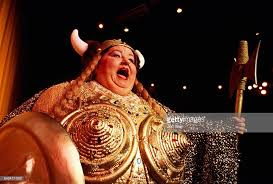 I'm meditating on the fact that at some point in history, a parent, or the parents, of a girl child decided to give her a name I assumed must mean something like "hero of the fountain" (Brunnen-held), or Brunnhilde, if you're one of those who follow Wagner's operas. Or Brynhildr, if your native tongue is Old Norse. Brynhildur in modern-day Icelandic, Brynhild in modern day Swedish, Norwegian, Danish, Finnish and Faroese. And while we're at it: Brunilde in Italian, Brunilda in Spanish, Portuguese and Catalan. Never mind that "hero of the fountain" makes absolutely no sense. Most things make no sense.

Turns out my assumption was way off. Her name has nothing to do with either fountains or heroes. It comes from Proto-Germanic (i.e., the theoretical ancestor of the Germanic languages), brunjǭ, meaning "breastplate" (from Old Irish bruinne (“breast, bosom, chest”), from Proto-Celtic *brusnyos, which is declined as follows:

and is found in Old Church Slavonic as брънѩ (brŭnję) and in modern-day Russian and Bulgarian as броня́ (bronya).

Hild has nothing to do with Held (hero), as I said.

The same "hild" that is found in many other girls' names.

Why all these girls are named for the human inclination to be aggressive and cause widespread death and destruction remains a mystery for another day.

I'm simply seeking something to distract myself from the endlessly depressing fact that Americans are unwilling to admit that when a woman testifies under oath that she was once locked in a room with a man who covered her mouth with his hand while he tried to sexually molest her and the man she accuses of doing this swears under oath that he didn't do it, that there is no way, short of a very lengthy unpleasant investigation, of finding out who is lying and who is telling the truth. And even then, the investigation may prove fruitless. And that while this “circus,” as it has been called by people on both sides, is going on, there are other considerations for whether this man should be chosen for the highest court in the land – his temperament, for one, and an honest evaluation of his entire record as a judge.

Since according to the latest Gallup poll, fewer than one in five Americans approve of the way Congress is doing its job, they are probably not in the best position to act as judges in this case.

If Kavanaugh is appointed to the Supreme Court with this degree of disapproval and doubt, faith in the integrity of the Court will be in the toilet.

But I have other fish to fry.

Does the name Siegfried come from Sieg (victory) and Frieden (peace)?  Or am I making another false assumption?


Sometimes I get it right.

P.S. Taku and I named our daughters Miki and Bounce.