You can't have your cake 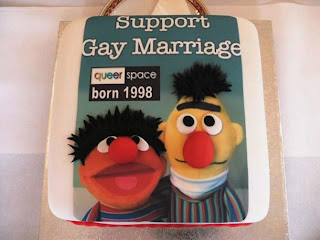 LONDON -- Britain's Supreme Court says a bakery owned by a Christian family didn't discriminate against a gay customer when it refused to make a cake supporting same-sex marriage. Ashers Baking Co. in Northern Ireland refused in 2014 to make a cake iced with the Sesame Street characters Bert and Ernie bearing the slogan "Support Gay Marriage." The owners argued they couldn't put messages on their products at odds with their Christian beliefs.

Judge Brenda Hale said Wednesday that their objection was to the message on the cake, not to the personal characteristics of the customer. She said in her ruling in what has been dubbed the "gay cake" case that while it is "deeply humiliating, and an affront to human dignity" to deny service because of sexual orientation, "that is not what happened in this case."

There have been protests staged by both sides. Earlier this year, more than 2,000 people gathered in Belfast, Northern Ireland, to support Ashers Bakery Co. In January, over 1,000 people protested the introduction of a "conscience clause" into Northern Irish equality law, aimed at creating legal exemption for strongly held religious beliefs.


Organized religion wins another one in this long protracted battle lesbians and gay men have been engaged in for civil rights and dignity. Britain’s Supreme Court just decided that if a Christian didn’t want to make a cake with the political message “Support Gay Rights” on it, he didn’t have to.  No surprise. We’ve been here before.

Not long after the National Socialists were voted into office in 1933, the official Lutheran Church, reflecting the views of the government, and clearly those of many of its members as well, willingly adopted the so-called “Aryan clause,” whereby Jews who had converted to Christianity would henceforth be denied access to communion, effectively excommunicated them. And 70% of the Christian church members were in favor of Hitler’s hand-picked stooge, Ludwig Müller, to head the church [Marsh, Charles, Strange Glory: A Life of Dietrich Bonhoeffer, p. 163]. The exclusion of Jews was both legal and an expression of the “conscience of the body of believers” of the time. Hitler’s morality was on full display in Mein Kampf, which was not only widely distributed but widely read. But the average German was willing to forgive a multitude of sins, given the clear evidence that he had brought Germany back on its feet economically. So much for law and conscience.

Because so many Americans are “believers,” it’s hard for non-believers to be taken seriously most of the time. When they point out that religious organizations often show considerable malice toward people outside the fold, eyes roll and you hear the voice of Reagan saying, “There you go again!”  But non-believers should be listened to at times like this. It is not a fact that Christians must be homophobic to be Christian, for example.  That is a “belief” that is held by a subset of the global Christian community, and by no means all. These days, not even the majority anymore. It’s not a question of what “the Bible says;” it’s a question of the conclusion any given Christian person comes to when he or she reads the Bible or listens to the advice of their religious authority. And the citizens of a society which is committed to keeping church and state separate have a right to expect the laws of the land to be interpreted in such a way as to keep the bigoted conclusions of that subset of believers from being translated into law.

In time, the larger world came to see the conclusions of German Lutherans in 1933 to be unfair to the Jews. And in the light of history we now have to acknowledge that those who went along with the Aryan Clause were little more than enablers of the Holocaust that was to come.  It seems to me we might give more careful thought to just exactly what we are doing when we allow those who insist God wants them to consider gay people sinners to call the shots. Sinner how? According to your belief? What if my belief is that your belief sucks? Wouldn’t we all be better off if we left belief out of it, and stuck to concrete behavior?

Between you and me, I have a bone to pick with the gay people who give their business to bigots. I for one wouldn’t dream of allowing somebody who thought of me as a lesser human being to bake me a cake, much less pay for it.  Too much opportunity to spit in the mixing bowl. Really, guys, can’t you find somebody who actually deserves your business?

Déjà vu all over again. I don’t know if you remember the  American “gay cake” case from four months ago.  Charlie Craig and David Mullins went into the Masterpiece Cakeshop in Lakewood, Colorado, just outside Denver and ordered a cake for their upcoming wedding. Jack Phillips, the owner of the bakery, said celebrating a same-sex union was in conflict with his religious beliefs, and he didn’t want to bake such a cake.  The Supremes decided in Phillips’ favor and against the gay couple.

So it goes, I remember thinking. Nobody promised you a rose garden. (My mother had clichés for all occasions. I use them in loving memory.) It’s what happened next that caught my attention. People read the headlines but failed to dig a bit deeper for the implications.  Anti-gay Christians celebrated what they saw as a clear win for Jesus. And pro-gay folk consoled themselves by declaring it only a “limited success” in that the majority opinion, written by Kennedy, explained that this decision was meant to apply narrowly. It specifically left open the possibility that gays might win future cases of discrimination, if they could demonstrate that they were being “treated as social outcasts or as inferior in dignity and worth.” What bothered Kennedy in this instance was his impression that the Colorado Civil Rights organization "showed hostility to religion" and that one of its members had compared Phillips’ serious religious beliefs with a defense of slavery and the Holocaust. As you might want to say I did just now.

That’s the thing that jumped off the page at me. You really think Phillips deserved to win because a civil rights organization showed hostility to religion?

Conservatives, like Kennedy, accept that religious beliefs are in and of themselves worthy of respect, because religion is at the core of our moral system. Progressives are more likely to want to explore any belief statements to see if they cause harm. Your belief in the tooth fairy is a perfectly innocent belief, especially if you are under five years old. But your belief that people of color all smell bad is not innocent. It deserves wholesale condemnation – as a belief. Your belief that the person who drew the Danish cartoon image of Mohammed deserves to die because he insulted your beliefs also deserves a legal and a moral thumbs down. There is nothing sacred about “belief.” The first black pilots from Tuskegee, Alabama in World War II proved to be heroes, even though their supporters had to move heaven and earth to get past the beliefs of most white people of the day that black people didn’t have what it takes to fly planes. I could go on giving examples of verkakte beliefs till the cows come home (thanks again, mama.)

Supreme Court justices are given the job of making the final call when the law gets fuzzy. In a perfect world, legislators would write laws that were iron-clad, and not subject to interpretation. But even if that were possible – and I doubt it is - given the highly flawed nature of our legislative bodies, we’re always going to need folks to interpret the laws they come up with. And that means we’re always going to have political battles over how our judges are selected and evaluated over time. This spectacle over the Kavanaugh nomination deserves to go down in history as American democracy at its low point. The good guys (my people) insisted that Christine Blasey Ford should be believed and that we should act on that belief and hold up Kavanaugh’s nomination. The Republicans in power insisted that Kavanaugh should be believed and even tried to fast-track the voting process. I know there were voices out there demanding we stop the circus and recognize we were faced with two conflicting sets of beliefs and needed time for an exhaustive investigation, but they were very few and very far between. What we got instead was the rawest, ugliest imposition of power I’ve seen in my entire lifetime. We win, said the Republicans. And the world knows it’s not because they were right. That wasn’t what was at issue. The stock market is up. Who cares if the Leader is a pussy-grabber?

When looked at through the lens of the gay liberation movement, Kennedy the sometimes conservative has been replaced by Kavanaugh (the always conservative?) That’s belief only, of course. The proof is in the pudding. (And I'll stop with 3.)

As for the British cake-case (Northern Ireland, actually, the only part of Britain where same-sex couples are not treated as equals), unlike what happened with the Colorado cake-case, where it was clear it was the couple’s relationship the cakemaker was negatively reacting to, Lady Hale, president of the British Supremes, made a special point of distinguishing between the gay couple – who, she said, were not discriminated against – and the “Support Gay Marriage” message on the cake, which she clearly saw as political, something one might disagree with without being considered bigoted.

I think Jews should be allowed to join country clubs. That’s political. You have a right to disagree without being considered bigoted.

Did I get that right, Lady Hale?

Can I simply say what a aid to seek out someone who truly knows what theyre speaking about on the internet. You undoubtedly know how to bring a difficulty to mild and make it important. More people need to read this and understand this side of the story. I cant believe youre not more in style because you definitely have the gift. online casino

Youre so cool! I dont suppose Ive read anything like this before. So good to find anyone with some original thoughts on this subject. realy thank you for beginning this up. this website is one thing that is wanted on the web, somebody with a little bit originality. useful job for bringing something new to the internet! online casino gambling