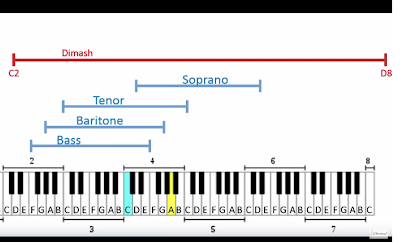 Dimash Kudaibergen has a voice range that goes two full notes below the normal bass range and over two  octaves above the normal female soprano range. I know of no other human being with the ability to hit notes that high and that low both.  Dimash not only pulls this off; he also has perfect pitch and a professional opera singer's voice control and a voice quality routinely described as "pure" and "just plain lovely." He is a walking musical miracle.

He's widely known in China, where he recently clocked 1.6 billion hits following his success at a Chinese musical competition. He's also known in Russia and his homeland of Kazakhstan, but his reputation is just getting started in Europe and America.

I'm having a bit of future shock in dealing with this boy wonder. I'm his grandfather's generation. I had my 54th birthday ten days before he was born. And for the first young years of my life I had no idea where Kazakhstan was. Russia was the enemy and China a sleeping giant. And here we are in a world where a billion Chinese have heard, and I suspect marveled at, his voice and he's just started what could be called a new genre - reaction videos to his performances, by people in the west who call themselves music critics hearing him for the first time and asking the question, "How is it possible I have not heard of this guy before?'

A brief comment on the side here on how China is no longer taking the back seat to influencing world popular culture. Watch this video of first Celine Dion and then of Dimash joining Chinese singer Song Zuying singing in China in Chinese to the kind of ridiculously overelaborated staging and choreography the Chinese made famous in the Beijing Olympics. They're making videos now of Americans reacting to this performance, all looking a bit sheepish and often amateurish. I predict he will soon overpower the American popular music scene. You heard it here first, boys and girls. And we haven't touched yet on the many ways he's stretching his wings - dancing a Michael Jackson tribute, for example, or writing his own compositions on the folly of war.

Dimash rose to fame after winning two competitions, becoming the grand prix winner in the Slavianski Bazaar in Vitebsk, Belarus and then hitting the big numbers after entering the Singer 2017 competition in China in 2017. Once again, I can't help remarking on how different the world looks when you stop believing it is centered in the United States.

I can imagine some kind of backlash by people who will want to argue the guy is too good to be true, too given to vocal pyrotechnics to be treated as an ordinary musician. Watch the videos of his performances in China and the camera spends as much time on audience reaction as it does on Dimash himself. And the American and European reaction videos seem to be increasing daily by the dozens. I hope that nonsense won't be held against him. 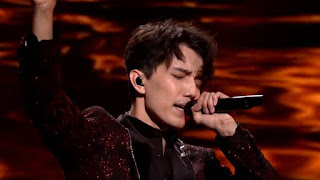 He's classically trained and blessed by being born into a musical family. His mother is an opera singer, his father a singer and music producer. He has a degree in classical music from his local university and was trained by a teacher with the title of "Honored Artist of Kazakhstan" - which title both his mother and father also hold, by the way. He was invited to join the local opera and nobody doubts he'd make one hell of a splash with that powerful breath control in his thin body. Instead, he has chosen to milk his skill and his talent in the world of popular music. A good choice if the goal is bigger, better, more, and faster.

I have spent the past three or four days listening to his performances, to the background stories and the reaction videos. I'm glad I did. I've learned a whole lot about the voice, the difference between a head voice and a mix voice, about the difference between a falsetto and a soprano singer's voice and how Dimash can apparently do both.  About where the falsetto register ends and the whistle register begins. How some sopranos have to go into their whistle register while others can perform the same task in their modal register. You get the idea.

I've learned about Arabic and gospel melismatic singing (lots of notes on a single syllable), the ostinato (repeated) phrase - all of this stuff comes through in the lengthy commentary on Dimash's remarkable vocal agility, skill, depth and range. A veritable music appreciation course. Only unlike earlier "appreciation" courses I was forced to take as a kid which only turned me off what I was supposed to appreciate, this time I think I have a much richer take on what goes into musical education, especially voice lessons. It has been a glorious ride, and I'm ready now to sit back and enjoy each one of Dimash's new songs as they come out.

You can try to find videos of his performances and escape all the analytical pieces about his unusual six octave range and his superhuman voice control. Good luck with that. But I suggest you just join his adoring fan base in falling all over yourselves at this exciting new musical phenomenon, if you're not already there. Here are a couple suggestions if you haven't heard him before. YouTube has many more to offer:

Best known songs, in which he reveals his range and his skills:

2. Love of Tired Swans (performed at the Kremlin, no less): https://www.youtube.com/watch?v=qXZ3BbnM5dE


Now (with apologies to my Chinese friends for my provincialism) when's the last time a song sung in Chinese brought you to tears?

Nice article. Thank you for the credits♥️

Good job DEAR👍👍👍👏👏👏 keep it up, we don't have enough writers

Very good article as an introduction to dimash, and to express what you feel about him. You represent what I experienced too. Thanks 💐💐💐

Great article. You are absolutely right about Dimash. This 10tn December he is going to be in New Your in his first solo concert called: ARNAU Envoy, in Barclays, Brooklyn, NYC.
There are only few tickets left for this fabulous concert. Don’t miss it. Buy them at Ticket Masters.

Great read...I must add he has two and not only one degrees in music. Classical and Contemporary music. He is also presently enrolled for a Masters' degree o Music Composition.

A great words for Dimash..

Thanks for a wonderful overview of Dimash's incredible abilities but above all: integrity, charm, wisdom, focus, humility ... May he keep all this intact throughout his career and he will be blessed as well as those of us who adore him and his art.

Amazing article about an incredible man!