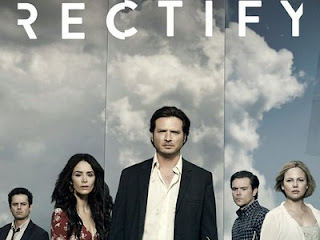 Rectify is the story of Daniel Holden, a man found guilty of rape and murder at the age of eighteen and sentenced to death. He spends the next nearly twenty years in a windowless cell on death row. Twice he undergoes the torture of being brought to the execution chamber only to be reprieved at the last minute. He is eventually released from jail and allowed to return home to his family when newly discovered DNA evidence shows he could not have been the rapist in question.

That’s one way of summarizing the story of the Netflix Sundance Series, Rectify, the way you’d go about it if you’re inclined to take a “just the facts, ma’am” approach.

You might also go at the story by challenging people to imagine what happens to the mind of a man accused and found guilty of a crime he didn’t commit and is then forced to live two decades, through his twenties and thirties, in a cell on death row awaiting execution at any time.

There is an abundance of material for writer Ray McKinnon to deal with here: the psychological condition of someone with some of the worst luck imaginable, the impact on both his own family members and the family of his alleged victim, and the roles played the real perpetrators, Jon his obsessive lawyer, the investigation team and the justice system. The fictitious small town, Paulie, (it was actually filmed in Griffin, Georgia) is also a character in the story - where but a small town would you get a waitress who sleeps both with the hero and the crook who framed him? It’s not surprising the filmmakers concluded they were going to require more than twenty hours to tell their tale.

Daniel is not the only one whose life is changed forever by his imprisonment. His sister, Amantha, dedicates her life to proving his innocence; his father dies not long after he is taken away, and everyone is willing to believe the cause is a broken heart; his mother remarries and tries to start life over, with not much success. His case is taken up by a pro bono lawyer whose efforts become more and more dogged as the years go by.

The tale is told with flashbacks which reveal a sordid incident of teenage gang rape.  Daniel and his girlfriend, Hanna, get high on mushrooms and become vulnerable when a gang of their peers shows up. Hanna is raped and murdered. After ten hours of police questioning, Daniel, already stressed out by Hanna’s death, signs a confession, thinking it is his only way out of the tortured bullying session with the investigators. An ambitious small-town politician uses the confession and conviction to launch his career as a state senator. The local sheriff takes his cue from the politician and shuts the investigation down at that point; they’ve got their man and can move on.

Binge-watching is a wonderful mechanism for bringing good shows back to life - Rectify's four seasons ran originally from 2013 to 2016 and since I don't watch television, I missed it entirely when it first came around.  It is also a grand pastime, made for the self-indulgent and for people like me (obviously not mutually exclusive categories) who are retired and can stay up till 3 or 4 a.m., on occasion, watching multiple seasons and dozens of episodes of this marvelous modern-day form of the soap opera, the TV serial. Except that, just as Oh, Calcutta was written by a playwright who wanted to show the world what pornography could be like in the hands of a good writer, most modern-day serials made for bingeing are of considerably higher quality than soap operas. At the same time, even the best of them tend to fall down at some point, and it becomes clear the writers are padding. They fall back on coincidence, and other forms of artificiality. In the end, the quality of a series is how well it succeeds despite these almost inevitable weaknesses. Rectify, in my view, does better than most.

Rectify is comprised of thirty episodes over four seasons, averaging approximately 45 minutes, more or less, per episode, or about twenty-two and a half hours of viewing. That’s plenty of time to dig into the back stories of all of the main characters, and to allow for considerable character development. A soap opera feature is the division into good guys and bad guys, but that weakness is offset by the evolution of their characters, for alliances to form and fall apart, for the good guys to show their weaknesses and still not lose their good-guy status.

Aside from the really bad guys, like the senator and the rapists who put the blame on Daniel, there is Ted, Jr., Daniel’s half brother – son of the man his mother married when Daniel’s father died – who is now fearful that Daniel’s return to the family is a threat to his inheritance. You get to shout your rage at the TV screen. After all that Daniel has been through, how could anybody possibly think of preventing full restitution?

There is considerable tension built into the story from the start, in other words, and all the writers and actors had to do was let it play itself out. They do much more. The plot is not only rich in plot twists and turns; it is also a powerful jumping-off point to the sociological question of the death penalty and the psychological question of how much injustice and cruelty one can endure without losing one’s mind. The acting is superb, starting with Aden Young, who plays Daniel. He succeeds in persuading you that without having learned to meditate in prison he might well have surrendered to rage and despair. He has a couple moments when he is confronted in his new life with reminders that release from prison has not led to complete release from injustice. There are prejudices of small (rural Georgia) town life to contend with and the fact that he has been cleared of the rape but not of the murder means he could be retried and sent back to death row. The plot gets unbearably harsh when he is faced with the choice of accepting a plea bargain in order to be relieved of that threat: the problem is it requires admitting he committed the murder.

I’ve already given away too many spoilers; I won’t ruin the ending.

I’ve taken several days since watching the thirtieth episode to get around to writing this review. It’s been on my mind the whole time. I can’t escape the horror of facing injustice as cruel as this, and the story will be with me for some time yet, I suspect.

Coincidentally, in the news this morning was Governor Gavin Newsom’s decision to place a moratorium on the death penalty in California. The part of the announcement that stopped me cold was the fact that since 1978 when the death penalty was reinstated, five men on death row have been exonerated. And some estimate about 4% of those on death row are actually innocent.

The death penalty is, along with gun control, abortion rights, same-sex marriage and immigration, one of the issues that keeps the U.S. polarized. Those of us on the left who feel there are several sine qua non requirements of a democracy. These include fair elections, a free press and a fair and honest judicial system. Any attack on any of these is an attack on the quality of our civil lives. Progressives are celebrating Newsom’s moratorium, because at the heart of a fair justice system is the principle attributed to the William Blackstone, the English jurist, that “it is better that ten guilty persons escape than that one innocent person should suffer.” Benjamin Franklin apparently cited that, upping the number of guilty in the ratio to one hundred.

Others have taken the opposite stand. Bismarck, the German “iron chancellor” and unifier of modern Germany, apparently said the opposite: “it is better that ten innocent men suffer than one guilty man escape.” President Trump’s comment on Newsom’s moratorium was not that clear; he simply criticized him for not placing the perspective of the victims’ families foremost.

If you’re inclined, as the president apparently is, to think it wouldn’t hurt to off an innocent man now and then if it means we can retain our reputation for being tough on crime, set aside some time and have a look at Rectify. It will be good for your soul, I promise you.