Arizona and the Two Catholic Churches

Don’t know if you’ve been following what’s going on in Arizona these days. I have, in part because my dear friends Ed and Ann live there, and I can hear their teeth grinding here in California.

Such a gorgeous place, Arizona. The Grand Canyon alone makes it pretty much heaven on earth, in my book. And if you want to build up gradually to heaven, there’s Bryce and Zion to marvel at just across the border in Utah. The desert. The cactus. The red sand. So much beauty came along with God’s grace shed on Arizona.

And in the clutches of such wrongheaded people. Consider just a few of the biggies:

There’s Republican Governor Jan Brewer, for example. And Senator Russell Pearce and Sheriff Joe Arpaio and their new push for police power to question and detain anybody looking suspiciously like a Mexican. Won’t go into this here. You can google them, or “Papers Please” or any number of sources, to get started on the story.

Then there’s this footnote to the good news that Obama has stepped in at long last to overturn Don’t Ask/Don’t Tell. Nancy Pelosi says the numbers are there in Congress. 78% of Americans concur. And what does Arizona’s Senator John McCain have to say about this? Remember him? Ran for president with Sarah Palin? Easily mistaken for a dinosaur? Well, he’s planning to filibuster the amendment. Even his wife doesn’t agree with him on this. But beating up on gays is a tried and true Republican vote-getter, and McCain is desperate enough to shed whatever shred of integrity is left to his sad career.

But top of the list of candidates the good citizens of Arizona might want to wish away has got to be the Most Reverend Thomas J. Olmstead of The Roman Catholic Diocese of Phoenix.

What’s he done? Check out Nicholas Kristof’s article in this morning’s edition of The New York Times. Read as many of the comments as you can. They add to the story.

The story is getting real old by now, and even bringing it up makes me worry I’m over the line again into beating dead horses.

But this strikes me as a new low for the wretched carcass of the patriarchal Roman Catholic Church and the strongest evidence yet that there are two now increasingly distinct catholic churches. One lays claim to authority. It centers on the pope and the curia and the princes in their splendor and their bureaucratic loyalty to the principle of male dominance. The other, that wonderful motley collection of teachers and nurses and village priests catering to the needs of the world’s poor and needy. You know, the Christ-like kind. 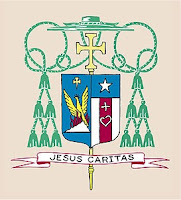 Well if you want to see a poster boy for the authoritarian segment of Mother Church, (aka the “ultramontaine” faction or the pre-Vatican-II Church - it was at Vatican I in 1860 when Pius IX declared against great opposition that henceforth popes would be infallible) – take a look at Tommy Olmstead. Don't want to embarrass him by showing his face. Here, on the right, is his coat of arms.

Back when the church began to fight the charges of child abuse, Tommy realized he could help by incorporating local parishes individually. Can’t say this guy isn’t crafty.

He banned then Arizona Governor Janet Napolitano from speaking on any church property because she wasn’t anti-abortion. He scolded Notre Dame publicly for inviting President Obama to give the commencement address, for the same reason – that and for his support of stem-cell research.

If you’ve checked out Sheriff Joe Arpaio, you’ve discovered he reinstituted chain gangs, advocated raids on Hispanics to separate illegal alien mothers from their children, kept cameras out, told deputies not to give their names and to wear ski masks. What did Tommy have to say about this? OK by him.
All of this is a digression from the Kristof article in the Times, however, about a nun named Sister Margaret McBride. She has just been bounced out. Excommunicated.

Why? Because she took a stand, as probably most Catholics today would, and argued that if a woman’s life is in danger, and an abortion could save her, an abortion is called for. Catholics even ground their argument not only in current humanistic values but on St. Augustine’s argument that a child does not receive a soul until it is “viable.” The case in question concerns a woman in the eleventh week. Still in the first trimester, that is.

No matter, says Tommy Olmstead. If God wants her to die, she will die. Modern medical practice be damned. Rules are rules.

And sister, you knew the rules when you joined the church. Don’t like them? Get the hell out.

Here’s a picture of this lady. 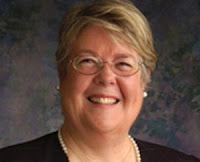 Don’t know if you’re interested, but the address and phone number for the Episcopal Diocese in Phoenix is

I can’t speak for them, but if I were in their shoes, I’d welcome you with open arms.

As for you, Tommy Olmstead…

If I were you, I’d worry about the possibility the church will get its shit together and figure out who the real followers of Jesus are. If they do, I suspect you’ll be out of a job.

I sure hope so. All those schools and hospitals…

And you, Arizona, do you remember when you were part of a country that led the world in pursuit of universal human rights?

In your case, you don’t need to fight centuries of corruption to get back there.
Posted by Alan McCornick