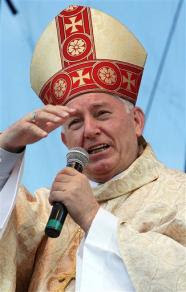 What is it about these guys with the pointy hats? Does the mitre work like a lightning rod in reverse and draw all the intelligence right out of the brain?

This guy has concluded that society is pedophilic.

There. Now we can stop molesting the church. It's not the church. Not even individual clerics with their sexuality tied in a knot. It's society.

And boys are naturally homosexual because, after all, they prefer to play with other boys instead of girls unless they are properly taught.

This isn't some bumpkin who went straight from raising goats into the seminary, mind you. This is the friggin chancellor of the Catholic University of Rio Grande do Sul, in Brazil.

And what should we do about all those priests that have been abusing children?

Leave the police out of it, he says. Let the internal punishment be sufficient.

Has this guy ever read a newspaper? Turned on his TV set?

This guy is a bishop?

Man Ratzi, I knew you had some housecleaning to do, but you need more than Mr. Clean, fellah.

Gay rights? Ask old Dadeo whether gays should have rights and he slips right into that Slippery Slope song - you know, give them their rights and the next thing is we'll be giving rights to pedophiles.

This guy is positively wicked.

One good thing about him, from the church's point of view. He's a good Catholic. Always looking out for catholic interests.

Like when he pointed out that far more Catholics suffered in the Holocaust than Jews.

And why don't we all know that?

Ask him. He'll tell you.

"Because the Jews own the world's media."
Posted by Alan McCornick