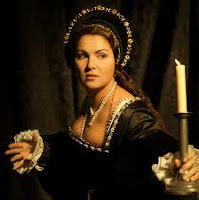 Everybody knows that Enrico the 8th had six wives. And that he divorced them one after the other. Or cut off their heads. Which he was able to do because he told the Pope of Rome to stuff it and started the Church of Inghilterra.

Many people also know that Anna Bolena was Enrico’s second wife, the one who followed Catarina of Aragon, whom he divorced in 1533 because she couldn’t bear him a figlio, which might have kept La Famiglia Tudor in business.

Problem is, once Enrico had developed the habit of getting rid of a wife, there was nothing to keep him from doing it again, so Anna lost her head, and Enrico went on to Giovanna Seymour. She died after only one year in office, but that’s getting ahead of our story. We’re really only concerned with Anna Bolena, played by Anna Netrebko, Enrico, played by Ildar Abdrazakov, and Giovanna Seymour, played by Ekaterina Gubanova.

I know it might strike you as out of the ordinary that such illustrious English characters as Enrico, Anna and Giovanna should be played by Russians, but such is the splendor of this brave new post-cold war era, and we should all be mighty thankful for it. Those Russians sing so beautifully they make you want to cry.

This latest MET performance of Donizetti’s Anna Bolena isn’t all Russian. Sir Richard Percy, Anna’s true love, before she got ambitious and realized she could get Enrico to bump off Catarina, is played by Stephen (nice English name) Costello (OK, not so English.) Stephen/Percy also has a voice to lift you out of your seat and howl with delight. (See the link to the trio, below.)

If you don’t know these names – I didn’t – you might want to get to know them. Ildar Abdrazakov, according to the Nezavisimaya (Independent) Gazeta, has a “velvety voice, full sounding, ideally pure, with an almost tangible aroma of vibrato (now there’s a turn of phrase) that filled the entire auditorium: how could this not drive you insane?” OK, that was a bit excessive, and not about the Anna Bolena performance, but about a Verdi Requiem he did back in St. Petersburg – did I tell you that Ildar is an “honored Artist of the Republic of Bashkortostan? – here’s a picture of one of its architectural splendors. But it gives you an idea of what a bear he is and how he can sing.

Don’t believe me? Have a listen. Here he is singing the memorable aria, “Desta si Tosto” (“Oh, did you just get up already?”) with Anna and Percy. (All YouTubes are from the performance in question, by the way.) Even if you don’t have time for the whole of it (and you’ll kick yourself around the block if you miss that trio), have a look at those costumes. They brought in Jenny Tiramani to do the costumes, and she’d be taking six or eight curtain calls, if I had anything to do with it. Such a feast for the eyes. Jenny was Director of Theatre Design at Shakespeare's Globe Theater for ten years, so she knows how to dress the 16th Century. Which you will get a taste of, if you go to her Facebook page.

But back to the Russians. I don’t want to neglect the third one, Ekaterina Gubanova, also, like Ildar, of the Mariinsky, who plays Giovanna. Here she is in that meeting with Anna in one of the more dramatic scenes in the play, where wife #2 learns that her best friend is going to be wife #3, and curses her out before forgiving her. (It isn’t Italian drama if it doesn’t give you emotional whiplash.) It just doesn’t get any better than “Seymour, mia rivale.”

Watching Anna Netrebko do this performance was a joy from start to finish. I love her voice to death, and it has bugged me no end to hear people talk of her as lacking in trill ability or unable to hit a high E-flat. What they are missing is the way she has grown from the young ingenue she was when Valery Gergiev found her working as a scullery maid (OK, I exaggerate, but I’m doing opera here, so give me a break) and launched her career. To get an idea where she is today, check out her web page. Everybody’s going gaga over her. “Reigning new diva of the early 21st Century” says Associated Press. “A virtuoso singer of endless versatility,” says Town and Country. And drop-dead gorgeous, just to put some icing on the cake. Even The New York Times wants to “bathe in her luscious sound forever,” demonstrating that music of this quality makes fools of us all.

Anna Bolena has two notable features as an opera. Besides the fact the music is so gorgeous, I mean. It was written by Donizetti as one of a trio about the queens of England (along with Maria Stuarda and Elisabeth) to see how many singers he could get to sing themselves into exhaustion. Beverley Sills once admitted, I read somewhere, that singing Donizetti took ten years off her career. And, unlike many operas – Trovatore, for example – that have plot lines that make you roll in the aisles, this one has a real-life story to it you can relate to. Unfortunately, from start to finish, it’s all about Anna’s road to the executioner’s axe, so the entire cast is standing around for three and a half hours looking like somebody’s about to have their head chopped off. But look on the bright side. You get to see Anna lift her long hair to the side in the last scene and walk directly into the darkness with her neck exposed, and then you see the executioner come down out of the sky with his axe, just as the lights go out and the audience rises to its feet shouting bravo, bravo, bravo all around and please do it again.

People are comparing Anna Netrebko’s performance of Anna Bolena at the Vienna State Opera last spring with this one. Some say Vienna had better staging, and I didn’t see it, so what do I know, but I’m a MET fan through and through and I thought this one by Robert Jones did the trick for me. It was designed for scene changes without the curtain coming down, so you see trees lowered down from above and suddenly there are dogs on the stage and people are not in the bedroom but out hunting. Cool stuff.

David McVicar, the Scottish director, who Wikipedia informs me is one of the 100 most influential gay and lesbian people in Britain, directed the piece. Can’t he just be among the 50 most influential gay people? But I digress. Watch him, if you like, talking about this performance. (You’ll hear Anna Netrebko tell you how hard the role is, as well).

Things have really changed. Opera used to be for the super elite. Today, thanks to this wonderful technology called simulcasting – and let’s not forget YouTube – it’s much more accessible. Hell, even Gayle what’s her name – you know, Oprah’s best friend who has her own show – is out there getting Anna Netrebko to talk about her boobs.

Too much information, I know. Best to get back to the real thing. Here’s a last look, at Anna singing “Coppia Iniqua.” (To hell with both of you, oh iniquitious couple). She’s gone mad by this stage (it’s opera, after all), and it’s only minutes before the head comes off, but consider that this lovely lady has been singing her heart and soul out for three and a half hours at this pace when she gets to this final piece.

Just sit there and marvel.

And go to Netflix and reserve this MET performance if it ever comes out on DVD.

What a voice Anna Netrebko has. Her range in "Coppia Iniqua" is amazing. You're so fortunate, Alan, to live someplace where you can avail yourself of such resources in the flesh.